I think I killed a hamster the first time I tried to post this (I anticipated a low number of responses, but I didn’t expect it to be that low). Anyway, here it is, hopefully it will actually work this time.

I know people get tattoos for diverse reasons, but my favorites are ones that are totally nerdy. Ones that only fellow nerds would recognize, thus drawing you together in tacit brotherhood. As the Dope is populated by ner–er, intelligent people, I’m confident there are lots of us with nerdy tattoos. I want see them!
First, here’s mine. Yeah, it’s dorky, I know.

What is it? Doesn’t look particularly dorky.
Me, I don’t have any tats. But maybe I’d get a Mandelbrot set – that’s pretty dorky and showy.

(I’d be willing to settle for a fair aproximation. I don’t want to sit there being used as a pincushion for a laboriously accurate depiction. And needles only go so smal.)

One of my managers at my old job had a Yoda tattoo.

The valedictorian at my high school had the Pi symbol tattooed on one forearm, and 22/7 on the other.

One of my good friends in college (a math major) got some infinity symbol tattooed on her ankle. Not the normal “sideways 8” version, but a version from one of the Norse countries. It’s basically a square, but the left edge goes up a bit beyond the square, and the right edge continues below it. A normal infinity isn’t that nerdy, since it’s pretty popular, but an obscure foreign version certainly qualifies.

Another friend has the Rebel Alliance symbol on one ankle, and the Decepticon symbol on the other.

Oh, and I’ve seen on the [adult swim] messages boards and in one of their promos that someone got a Meatwad tattoo. Hardcore.

A guy I knew in college had the reflexive property (A = A) tattoeed on his left tricep. He had a couple others, but that’s the only one I really remember.

My friend in Dallas has one of these inked on his chest.

What is it? Doesn’t look particularly dorky.

All my tattoos are kinda nerdy, in a way (wish I had pictures, didn’t think to bring in my camera today

1st, Wiccan symbol with alchemic writing, on my chest. I’ve actually met nerds other than me that can read this.
2nd, Negativland symbol and “Seat Be Sate” across the back of my neck. Fellow Negativland fans are the only ones who get it, everyone else thinks I’m off my nut.
3rd, Tim Burton illustration on the small of my back. Probably the most widely recognized of my tattoos.
4th, NailBunny on the back of my right shoulder. Have only met one person who recognized it, everyone else is like “You know you’ve a rabbit nailed to your back?!”
5th, “Gonzo” symbol (raised fist and dagger) on my right forearm. For Hunter S. Thompson. Not many people recognize it, but it did nearly earn me the tap handle for the Gonzo Porter at my favourite pub!

5th, “Gonzo” symbol (raised fist and dagger) on my right forearm. For Hunter S. Thompson. Not many people recognize it, but it did nearly earn me the tap handle for the Gonzo Porter at my favourite pub!

I always thought that would be a cool tattoo to have. And not nerdy at all. 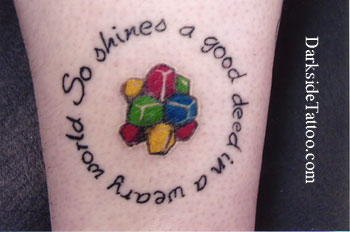 An everlasting gobstopper. Not mine, but the nerdiest tattoo I could come up with.

An everlasting gobstopper. Not mine, but the nerdiest tattoo I could come up with.

Oh that poor stupid son of a bitch.

I occasionally get the bug to get Superman’s S-shield on my ankle, but so far I’ve refrained.

Me, I don’t have any tats. But maybe I’d get a Mandelbrot set – that’s pretty dorky and showy.

I was tempted to get that after I get my math degree, but Complex Analysis cured me of that temptation. Complex geometry, gah. Now I’m tempted to get a hypercube.

I do have a Route 66 shield on a Joshua tree. More white trashy than nerdy, really.

What, no love for the murloc tattoo yet?

I have the Utah teapot, in wireframe, on my right shoulder.

Showing it at a party of engineering grad students once got me voted Biggest Geek in the Room.

A guy in my Magic: the Gathering group has blue mana symbols tattoeed on his biceps. Yes, he’s a mono-blue control freak from way back when. When he Mana Drains a spell, he flexes. :sigh:

Ok, this is the only picture I can find as I don’t have a camera with me - but does a Tolkien dragon such as this one count as nerdy/geeky? Maybe Tolkien is too mainstream now. I don’t know. What’s a girl to do? I love my dragon.

The book The Cult of Mac features a few people with Apple logo tattoos—including, as I recall, a big (maybe hand-sized) one on the back of a guy’s skull.

I knew someone with a big Rebel Alliance symbol tattooed right in her cleavage.