My buddy Blue Elk is calling Karlsson’s goal last night the Goal of the Year; I can’t argue because of my bias: I loved it!

Only a few games left, some meaningful, some not.

My thought going into the post is that I hope somehow the Predators lose before the Knights have to face them; they’re the only team that consistently dominates the Knights. If it comes down to Knights vs. Lightning, bet on the Knights=my 2¢.

Grats to everyone who’s team has already clinched a spot in the post-season, good luck to those still trying to get in and better luck next year to all the rest.

I realise this is from last month, but gotta be shared -

To sum up Matt Linder’s tweet: "[A 36 y.o.] accountant who plays in a beer league coming in and playing goalie and shutting down an actual NHL team for more than half a period,”

A couple days ago in a Black Hawks game, both Chi goalies got injured, and so they had to bring in this third-stringer who hadn’t played competitively in ten years.

At least he has a sense of humour.

My buddy Blue Elk is calling Karlsson’s goal last night the Goal of the Year; I can’t argue because of my bias: I loved it!.

Ah yes - Mario was infamous for those. Fun to try in shinny.

If it looks like anything like today, Gerry and Co. will meet the Kings in the first round. If Quick is hot, VGK will have their work very much cut out for them - MAF will have to meet that challenge.

After last night’s game, the Vegas Golden Knights all lined up to shake the Sedins’ hands.

I’ve never seen a team do that for soon-to-retire players. (Wonder if that was Gerrys’ idea)

Pardon the multiple posts, but last night’s Canucks game couldn’t have been more…perfect, for the Sedins’ final home game, as Daniel scored two goals, including the overtime winner. His first, below, was on a beautiful set-up from Alex Edler and Henrik.

Daniel Sedin scored his second goal of the night, assisted by his twin brother Henrik, to give the Vancouver Canucks a storybook victory over the Arizona Coyotes on Thursday.

Number craziness (bearing in mind Daniel is 22 and Henrik is 33):

And so - after 18 freakin years on the same freakin team, it got quite sad as they did a couple post-game laps and then shook hands with the Coyotes (this a thing now?), and a lot of camera shots of wet eyes in the crowd.

There were chants of “one more year”.

mmmm-naw, to that. They’re going out on their own terms (considering they can still play, sorta like Rafalski when he retired). Still, I can see Henrik getting phone calls this summer, but not Daniel, because he can play only with Henrik, while the latter can play with anyone.)

Nice aside: for the first time since expansion ('67, that is) - NOT ONE coach fired this season.

I can’t find a link right this second, but TSN is reporting that the New York Rangers have fired Alain Vigneault.

This could make for an interesting first round: the team that beats in my heart like the orange dot in the very centre of its glorious logo ever since I was a 6 y.o. back in '70/'71 season - the Philadelphia Flyers - will be facing off against a team that is apparently followed quite closely by another poster in this thread (who will remain nameless) and whose franchise initials might also be PP.

Too bad they’re both in the Metropolitan - I’m sure my :pnemesis poster:p would concur what an excellent Stanley Cup Finals that would be.
Fan disclosure/clarification: yeah yeah I’ve been touting the Canucks hella loads here, as well. By far the closest team to me geographically, their first ten years were too mediocre to catch this Flyer fan’s attention, but then I bandwagon’ed onto them when they started to prove themselves by getting to the '81 SCF, and in the ensuing seasons/decades, (even during some really mediocre eras) my allegiance to the Canucks, for some reason, remained relatively un-dimmed, despite my continued love, worship, and daily genuflecting that would be of the Flyers of Philadelphia. Whenever they played, Mary MacGregor’s one-hit-wonder was always the soundtrack. Gotta admit though - the Canucks were getting so brutally painful to watch that I had to end my season with them about three weeks ago.

Knights have the Kings for the first round. That’s a tough test to start the post-season; the Kings have matched up well against Las Vegas all season.

I can’t find a link right this second, but TSN is reporting that the New York Rangers have fired Alain Vigneault.

Had to be expected after the dismal season they had. Or at least not surprising.

Home ice advantage and we’re playing the Flyers in the first round? Oh, this should be good.

Do the Flyers have anyone to yell in Russian from the bench at Malkin? Apparently he doesn’t like that.

Do the Flyers have anyone to yell in Russian from the bench at Malkin? Apparently he doesn’t like that.

Evgeni Malkin got in a yelling match with Evgeny Kuznetsov because ‘Kuzy...

In what might be the most confusing altercation of the Caps season, Evgeni Malkin tried to fight TJ Oshie and got in a yelling match with close friend Evgeny Kuznetsov with a minute remaining in the third period. Malkin refused...

(“Go back to your Internet Research Agency Cubicle!!!”)

No rooting interest at all but I remember how epic the 2012 playoff series was between the Flyers and Penguins, and I’m hoping for a sequel

How did I miss this: Kovalchuk to return to the NHL with the Rangers. 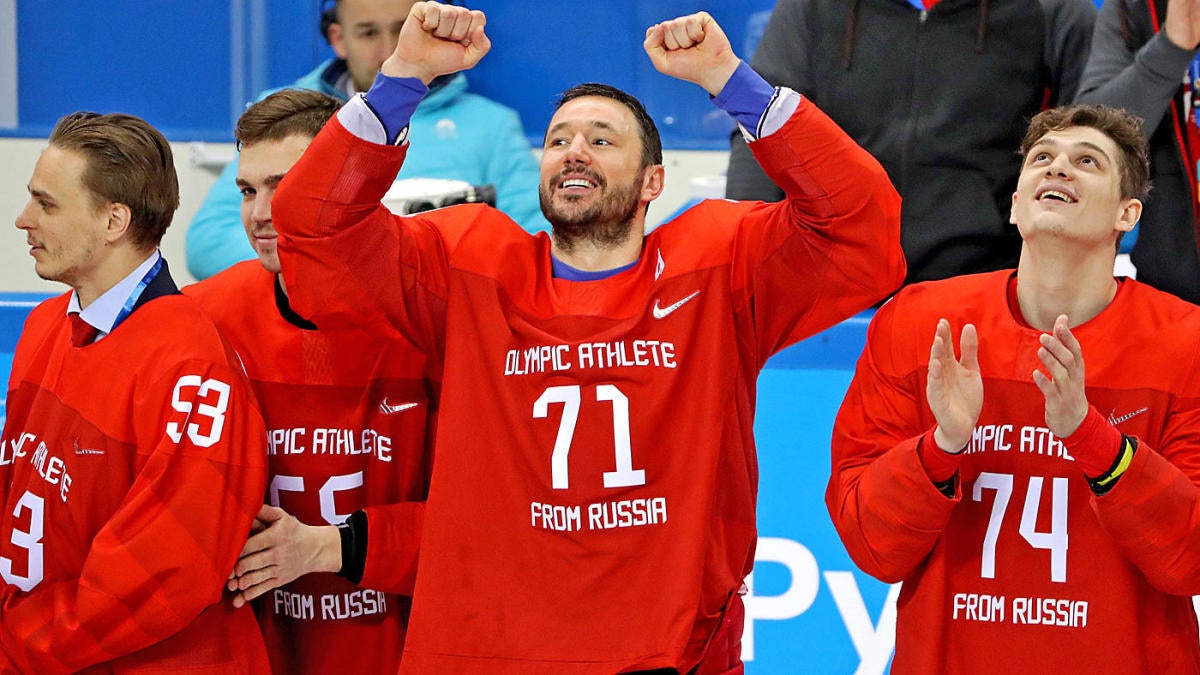 Ilya Kovalchuk to reportedly sign with Rangers, returning to NHL after 5-year...

Well.
That was goofy.
After 5-0 I fast forwarded it.
Friday, then.

Ho-lee shit. I know it’s just the first game, but goddamn. (And I loved seeing Ryan Shazier there!)

…and the Knights are unbeaten in the post-season! Never lost a post-season game!

Hitchcock retires from coaching for an advisors position with the Stars.
This isn’t that huge of a surprise. While the team started well enough, the collapse down the stretch was terrible. Probably Hitch is getting a little long in the tooth for the modern game. I only hope that there is a decent replacement available…