Many moons ago I knew a 16 year old girl that was bitten by one of her pet rats and got blood poisoning. Her whole arm swelled up and looked like a purple and red balloon with veins standing out.

Is that something you have to worry about with rats generally? Do rats get any kind of vaccinations?

I sure do miss having a kitty around. Would you mash him a little bit for me?

I tried to get him while he was completely on his back in typical doxie pose, but he flipped on me. 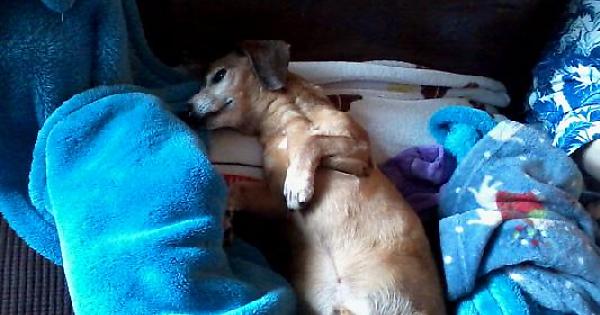 I think Luna inspired a really weird dream I had last night. It was a very complicated and convoluted dream and I’ve forgotten most of it, but the part that sticks in my mind was that I was walking home through a vast wilderness, and suddenly a black wolf appeared and approached me. It looked a lot like Luna. It seemed friendly so I wasn’t afraid. And then it was joined by a second one, also black. The two of them ran circles around me, seemingly wanting to play, and not being at all aggressive.

I continued home and they followed me. I realized as I neared home that I could communicate with them – literally talk with them. But once home, a neighbour caught sight of them. “Wolves!”, he yelled. “I’m going to get my rifle.” And off he went to some distant place where presumably he kept weapons.

I went to the two black wolves and spoke with them. “This is a dangerous place,” I said. “Many humans don’t like wolves. You must leave right away. You must return to the forest, though I will miss you dearly.” And one black wolf raised himself and put his paws on my shoulders, and I saw that he was crying. And I was crying, too.

The funny thing is that I had no idea there was even such a thing as a black wolf. But there is, and it’s usually a melanistic colour mutation of a gray wolf. If you search Google images there are lots of pictures. They’re really quite beautiful. Here’s one. Remind you of anyone?

Awwwww! That’s a wonderful story, thank you for sharing, @wolfpup.

The kittens are getting big. Little Linden is no longer little. Shannon shared 1 photo with you Shannon shared 1 photo with you

He may be moody, but Scooter is gorgeous! But then I’m moody too. However, I am not gorgeous (grey I will cop to).