Post Presidential Trump: Will justice prevail or will we still have to deal with him?

There are similar threads that have you all speculating, but I thought we needed one cohesive thread about post-presidential Trump.

I feel certain if he loses to Biden, he will have to do some maneuver where Pence takes over and pardons him. He could attempt a questionably legal “self pardon,” but why risk the legal uncertainty when Pence will pardon him “for the good of the nation.”

But a pardon requires admission of guilt, no?
Also, what about all the gobs of state level chargers/investigations? I’m hoping for an avalanche of justice. A Pence Pardon will not shield him from state charges.

People speculate he’ll keep holding rallies, keep campaigning for a potential 2024 run, but I don’t think he wants to be president. And having lost, if he does lose, he’ll have to figure out a way to say he chose to lose or whatever trumpian nonsense. I’m skeptical of a 2024 run. I’m skeptical the GOP would bank on a known loser. Would he run 3rd party? If he is pardoned, would he be able to run again?

People speculate he’s going to start some TV empire right of OAN. Will he be legally able to? Is there any chance he goes to prison?

I feel certain if he loses to Biden, he will have to do some maneuver where Pence takes over and pardons him. He could attempt a questionably legal “self pardon,” but why risk the legal uncertainty when Pence will pardon him “for the good of the nation.”

Is there any chance he goes to prison?

Certainly there is a chance. Former national leaders in Taiwan, South Korea, and Israel have gone to prison, so why not the U.S.?

Plus, this made it much more plausible:

Personally, I want Trump out of the news. And I think he could delay with appeals long enough to get out of being sent to prison on health grounds. But, yes, there is a small chance of prison time. 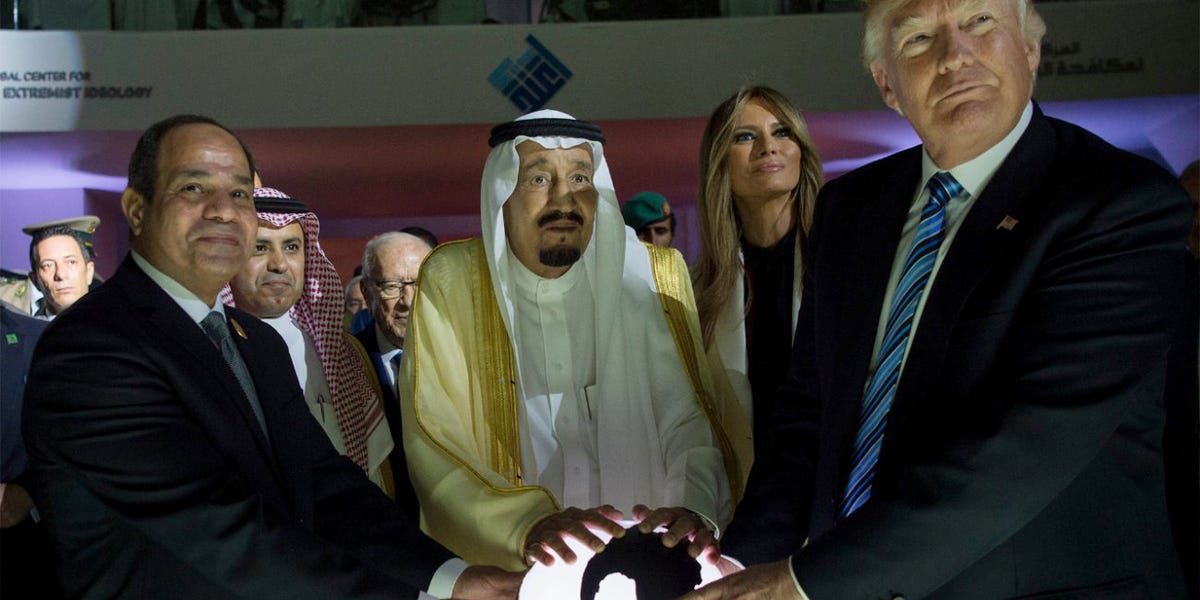 Trump touched the globe as part of an inauguration ceremony for the Global Center for Combatting Extremist Ideology in Ridyah, Saudi Arabia on Sunday.

I favor this. Yeah, it would be great to see “justice roll down like waters, and righteousness like an ever-flowing stream” and drown his sorry ass, but I’d settle for never having to look at his ugly face again or hear his hateful name.

As I’ve said in other threads, I think he is just going to walk/fly away and let accusations and charges slither off his teflon-coated hide.

This country has given DJT waaaay too much attention over the past four years. He has been in the headlines every day all day in every media outlet and I’m sick of it. He doesn’t deserve it, and the country can’t afford to spend any more time or energy dealing with him.

If a small cadre of vigilantes like the Nazi-hunters of the past century want to spend decades pursuing him, I’m all for that, and they have my blessing.

I agree. The challenge of Trump after office is that there is a major conflict between two ideals of a free and fair government.

Trump fleeing would thread the needle. All non-crazy people would see it as clear evidence of guilt, and we could let the State Department make half-hearted attempts to extradite him without ever having to actually put a former president in prison.

Putting deposed leaders on trial after their time in power is really bad.

Trump has broken every norm ever established regarding the Presidency, let him break this one too.

We are a nation of laws, and those who break the law should be prosecuted.

The second clause of this sentence does not follow from the first.

The great majority of law breakers get away with it — and we still have the world’s highest incarceration rate, or close to it. If most of those who break the law were prosecuted, there would be a societal breakdown.

Some crimes are too heinous to ignore. But if we are talking about white collar (or drug) crimes where there is nothing previous on the rap sheet, I would let almost all of those arrested go with a police warning but no prosecution.

As a former President, Trump would be privy to a large amount of top secret info. While nuclear codes and the like can be changed, other information would be of great value to friends and enemies of the U.S. Given his lack of ethics and undoubted great need for money to sustain himself – and secondarily, his family – an ex-president Trump would seem to pose an intolerable risk of selling out U.S. interests if not watched closely.

This suggests that if he is to (hypothetically) leave the country after losing the election, it would have to be while he was still president, so that no one could legally stop him. I think some pretext to keep him in the U.S. would be used if he tried to flee after his term expired. Assuming he makes it out of the country with all kinds of legal action accumulating against him, he would become a fugitive ex-president… and a convenient bogey-man for Democrats to blame things on (much like “fugitive financier” Robert Vesco back in the Nixon days). With more details of what he and his administration did and tried to do likely to be released to the public, he seems destined to become one of the most hated Americans ever.

Not nearly bad enough, imo. Perhaps if Ivanka were to testify against him in court to save her own ass from legal jeopardy, the scales would tip a little closer to true justice, but there seems no realistic hope he will ever experience the full measure of what he deserves.

I’ve suggested in other recent posts:

(1) One of Biden’s first acts in office should be an Executive Order suspending Trump’s passport.

(2) Whether or not we throw the book at Trump hisself, we can certainly throw all the books at his entire coterie of crooked ass-licking sycophants, Bill Barr chief among them. There’s a whole lot of collective jail-bird time to be served among them. And there IS precedent! (See, e.g., John Mitchell.)

One of Biden’s first acts in office should be an Executive Order suspending Trump’s passport.

Thankfully, there is zero chance Biden will be the kind of leader who singles out enemies as suggested.

Hopefully the New York AG will be in court at noon on January 20 issuing charges against Trump and ask that he surrender his passport as a flight risk.

But, honestly, if Trump bails he will almost certainly do so before he leaves office. Maybe take Air Force One to Russia on January 19 and then just stay. That would be the smart move.

Or he can hope Biden won’t go there. There is a long tradition that new presidents don’t investigate past presidents because eventually they will be a past president and don’t want it to happen to them.

Biden has been asked about this and he has sidestepped the question by saying his AG will have to do whatever the AG sees fit to do. Which is BS because of course Biden’s AG will confer with Biden.

My guess is Biden will make some noises about looking in to things and then nothing will be done. Our hope lies with the state attorneys getting after him and I suspect a few will.

Wherever he goes, just make sure he takes his entire family with him. Except Mary - we get to keep Mary.

As a former President, Trump would be privy to a large amount of top secret info. While nuclear codes and the like can be changed, other information would be of great value to friends and enemies of the U.S.

While he is certainly privy to this information we can take some small measure of comfort in the established fact that he has the attention span of a goldfish with brain trauma. Imagine being an actual spy and trying to get useful intel out of this ignoramus. “Okay Mr. President, we need to know what kind of fire-control system is on the new submarines.” “We have the biggest, best submarines ever! Nobody makes submarines like the US!” It would be like that old story about the character who is kidnapped and then the kidnappers end up paying a ransom so that his friends/family/etc will take him back.

It would be like that old story about the character who is kidnapped and then the kidnappers end up paying a ransom so that his friends/family/etc will take him back.

The Ransom of Red Orange Chief!

I’d go with this but Putin is not stupid. He’d likely direct Trump to collect some documentation and stick it in a briefcase before he leaves. When he delivers Putin gives him a nice dacha on the Black Sea with servants and women.

If he loses the election and eventually cedes power (or has it ceded for him), he will, without question, attempt to create a media company, likely Trump TV, from which he can continue suckling his narcissistic supplies from the public teat. He will continue to control Republican politics through his control over the mind of 36% or so of the electorate.

While the DOJ should go full force against him, Biden should keep his hands off.

I think that if Putin can give tanTrump orders to this effect he will surely have done it already. Several times by now, I guess. Successfully, of course, from his POV.

I disagree. Your rights are yours in your country, your country does not have jurisdiction outside its territory, so your rights do not apply there. You have no US rights outside the US, same for any other country. There is no fundamental right to emigrate, nowhere. Just as there is no universal right to immigrate, not even to the USA. As tanTrump has repeatedly made clear (see: build the wall!)