Apologies for the clunky title, I am not sure of the correct word. I am also not sure if this is an ATMB question or a Discourse question.
You know the little panel at the top right where it displays some of the subforums for you to jump to?
It doesn’t show all of the subforums and which ones are displayed changes from time to time. What governs which subforums show up there and which ones don’t? Is there a criterion or is it random?
For instance I regularly go to the BBQ Pit but it hardly appears at the top right. Other subforums I rarely or never visit do appear there usually.

Moving to site feedback, where technical questions about the software belong. 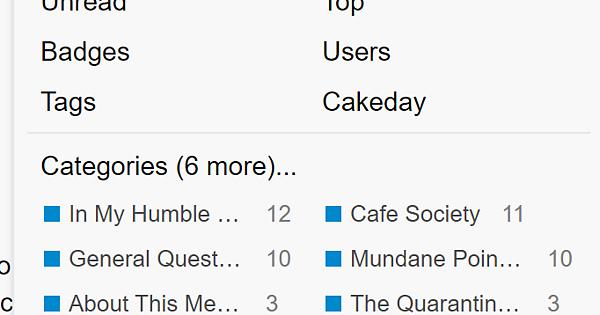 If you want the full category list, select the “Categories (6 more)…” entry to jump to /categories

Hmm. It would be nice if it were ordered by “how often I’ve visited these categories in the last {timeframe}”. Is that something the admin could change?

Thank you @codinghorror it makes sense. I would have thought, though, that the BBQ Pit would have more new posts per instance!
Yes, I know about the alternative ways to get where I want, I was just a bit surprised (and a bit annoyed) that it seems randomly to exclude forums I go to while displaying ones I don’t visit that often.

One of the community-building (or at least interest-building) ideas of Discourse is to try to gently push you towards opening more and different topics/threads than your usual habits. They figure you know how to find what you’re already reading; their job is to show you a sampling of the other stuff.

@LSLGuy , you are correct, I should have written the word topics, that is in fact what I meant. Thanks.

Which is rather silly, because a message board is not complicated enough to where a user can’t find all currently active threads.

And, yes, I’m going to keep using the original terms. A thread is not a topic: the same topic can be discussed in multiple threads. I do not like how Discourse seems to have tried to reinvent the vocabulary of forums.

I like “category” instead of “forum” fine. I tend to agree with you that “thread” is more descriptive than “topic”, though.

One of the community-building (or at least interest-building) ideas of Discourse is to try to gently push you towards opening more and different topics/threads than your usual habits. They figure you know how to find what you’re already reading; their job is to show you a sampling of the other stuff.

Well, in this case, it doesn’t work. Because that panel doesn’t show the forums I’d like to see, I just don’t use it. Like, I used to see it, but I’ve basically trained myself for it to be invisible. This thread reminded me that I used to try to use it.

I do sometimes follow the clickbait at the bottom of a topic (here are some other threads you might like) but while those are often threads I’m interested in, I dislike the feature because it contributes to my sense of feeling lost in the forum. I like to have a sense of place and structure, and I am still missing that here.

It sometimes leads to my posting inappropriate stuff, because I’m not keenly aware of what category I am in.

Clay Shirky's classic articles on social software should be required reading for all software developers working on web applications. As near as I can tell, that's pretty much every developer these days. But I somehow missed Joel Spolsky's related...

It's been six years since I wrote Discussions: Flat or Threaded? and, despite a bunch of evolution on the web since then, my opinion on this has not fundamentally changed. If anything, my opinion has strengthened based on the observed data:...

Fair warning; I am violently anti-threading, to the point that you might even say a thread killed my dog.

If pressured, I can support an enforced level of one (and only one!) threading in some scenarios, but that’s about it.

I think it’s a fine term if threading is actually happening, ala email, but it’s still a big net negative to the world for the reasons I described in my two blog posts above

That is a very good idea! One thing we haven’t gotten deeply into (or really at all, honestly…) is the idea that the software should learn your preferences over time. For example:

But for now, the categories at upper right in the Hamburger menu seem to be ordered by number of new topics.