I usually pick a line of dialogue as my favorite part of an episode, but I gotta go with the anime intro (complete with J-Pop lyrics!) to “Rick and Two Crows” as the funniest part of this one.

Yeah, that was perfectly done–right down to the ‘breathless little girl’ vocals and standard-issue secondary characters.

The two episodes provided a nice shout-out to corvids, too. (Though I don’t necessarily buy the ‘empathy is their distinguishing trait’ claim.)

As beautifully-made as the last episode was, I hope no one uses it to introduce this series to anyone—the level of confusion would be likely to keep them from becoming fans. Not a stand-alone ep!

Ditto. But I’m willing to concede that I was too drunk. Ill try watching again tomorrow.

I liked the last two episodes of the season. Clever, often funny, and told us quite a bit more (if we can actually believe it) about why Rick turned into the deeply messed-up mad scientist he is. I especially liked 40-year-old Morty revealing that all those decades hadn’t actually passed.

“Rick doesn’t really do transitions.”
“Jerry, what the fuck? Why are you a puddle?”
“I’ll always be your grandpa, Morty. Just… kind of obsessed with crows now.”
“I asked for zero proof. Zero proof!”
“Fine. I can eat. But the second he reveals he’s evil, I’m out of here.”
“I was expressing disapproval of your dialogue.”
“Wow. Dead wife?” “Yeah. Now everyone can shut up about it.”

And my favorite of the labels on the wheel of better-things-than-Morty: “JERRY (SPIN AGAIN).”

told us quite a bit more (if we can actually believe it) about why Rick turned into the deeply messed-up mad scientist he is.

“if we can actually believe it”, indeed. Wasn’t the “dead wife” backstory suspiciously similar to what we saw when aliens attempted to scan Rick’s brain back in Season 3? But now everyone can shut up about it.

Wasn’t the “dead wife” backstory suspiciously similar to what we saw when aliens attempted to scan Rick’s brain back in Season 3?

Yes, but that actually makes it seem more likely to me. When the bugs were probing his brain, Rick created a just slightly altered memory which would be a lot simpler than making one from scratch. Not to mention it was pretty poignant as it stood, perfect for lulling the Nathan Fillion-bug into buying the whole thing.

And my favorite of the labels on the wheel of better-things-than-Morty: “JERRY (SPIN AGAIN).”

I liked the moment when the Garbage Goober hopefully nudged the arrow to his name, and Rick shut him down.

“You were a DOCTOR!”

These two episodes were top-notch, easily in my top-ten, if I were forced to pick a top-ten.

Just curious if anyone else here has AT&T U-verse and had problems with their DVR recording R&M? I set it to record the series before the new season started, and it recorded the first few episodes OK but then completely missed the giant incest space baby episode. When that happened, I changed the recording setting from First Run Only to All Episodes, hoping it would record the missed episode if it got rerun. After that change, there were about half a dozen other “Rick and Morty” episodes it recorded, but only two were actually R&M. The others were either Robot Chicken or some cartoon with birds. And then it somehow still missed recording the R&M season finale.

I’ve got the DVR set to record a number of series and have never had a problem like this before, so I’m not sure if it is something I screwed up or if it’s just the DVR and the Adult Swim schedule not playing well together.

Wait, wait, wait. . … So this Rick we’ve been following this whole time never even met a Morty until the start of the series? So him crying watching Morty as a baby was bullshit? Why does C-a137 look for Rickless Beths instead of Rickless Dianes?

So this Rick we’ve been following this whole time never even met a Morty until the start of the series?

Well, he never met Morty C-137 before then. Since he helped build the Citadel, he’d probably encountered Mortys in the past.

So him crying watching Morty as a baby was bullshit?

He may have watched a baby Morty. Or Morty C-137 may have been watched by a different Rick.

Why does C-a137 look for Rickless Beths instead of Rickless Dianes?

He wasn’t specifically looking for a Rickless Beth - he just happened to crash Ship on Earth C-137 while blind drunk and happened to encounter one. As established back in season 1, there’s probably only a single-digit number of Earths within the Central Finite Curve that resemble C-137 (Beth is alive, Morty and Summer exist, Beth is still married to Jerry rather than Paul Fleishman, and Rick has been missing since shortly after Summer was born), so it’s probably the first time he’d stumbled into that set of circumstances where he found a Beth expecting a Rick to come back, and decided to stay.

As to why he never encountered a Rickless Diane - maybe that subset of universes is even more rare than the C-137-types? We’ve certainly never seen another Diane thus far, and it definitely seems to be implied that the Ricks have learned how to artificially produce Mortys to meet demand rather than seek out universes where they developed naturally, so the number of Ricks that actually have a successful family life and a daughter that grows up to have children of her own may be quite small in the cosmic scheme of things.

A good overview of what we know about Diane, Rick’s late wife - I’d forgotten some of this: 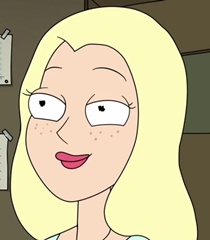 Why don't I get Beth and we'll go out for ice cream?The last great idea that will ever be had in this garage. Diane Sanchez is the deceased wife of Rick Sanchez and the mother of Beth Sanchez. Diane's death was the defining moment in Rick's life that...