It seems to me the best sandwiches have large amounts of content and just enough bread to keep things together. Big buns are okay but only if squishable so that the former is true.

Not a universal truth. But when I look at Subway most calories are in the bun. They taste good when freshly baked. But thinner is winner.

**This thread his about bread - on sandwiches only. Best type? Best thickness? Best combinations? Best preparations? And the best you have ever had - both bread and sandwiches - though sandwiches have been covered at length in the past, being awesome, but bread has not, to my knowledge, likely mistaken.

I agree with you: usually I do not like thick pizze, either. The main thing about the sandwich is that everything should be fresh. Whole wheat bread is good. Pumpernickel. Tandoor.

I feel that the ratio of bread to fillings is highly variable, with the heaviest weight going to the quality and/or flavor of the bread. If you have a cheap ass white bread / flavorless store kaiser roll, you want the least possible amount of bread.

If I’m using a high quality, dense pumpernickel or other worthwhile bread, then it’s just as much of the flavor package as the filling.

And the more ingredients, the more variables apply. So if I’m doing a simple grilled cheese (melted butter, bread cheese), then all ingredients must pop-pop-Pop! If I’m doing a Dagwood-style, many filling involved mega-structure, then each one has to balance the others. And the bread is normally the lowest flavor denominator.

Depends on the general type of sandwich, type of bread, and specifics about the filling. My standard would be roast beef sandwich on rye, it would have about 1/4 pound of meat plus 2 slices of cheese. The meat should be laid out thinner around the edges than the center, but not overly so. If adding lettuce, tomato, onion, etc. the meat usually needs to be laid flat so pieces of tomato don’t come sliding out. Cheese thickness varies with the type of cheese, some need to be cut thicker than others. I prefer something mild on roast beef like American, muenster, or sweet-munchee. If it’s on a roll there will be more bread, but it should be squishable as noted. Heavier crust breads should be cut as thin as possible to avoid a hard chewy crust. If you’re adding lettuce and tomato you the thickness will increase, the sandwich may need to be held tighter to keep it together, and bread thickness should be adjusted for that. For a good sub/hoagie/wedge/po’boy/dagwood/hero/grinder you need a ratio of more bread to filling. Total filling for a 10"-12" sandwich would be about the same as 2 typical sandwiches. But if wider rolls are available such as when making a ‘Big Sandwich’ then only an inch or two of slice of the sandwich might be equivalent to a common sandwich made on flat bread. Some condiments must go below the meat, such as mustard and horseradish, intended to wake up the taste buds so they appreciate the flavor of meat. On an Italian sub or similar the bottom half of the roll can be take some Italian dressing. Other condiments like ketchup that some people put on sandwiches for reasons unknown, but that stuff can go anywhere. Pickles, chopped onions, peppers, etc. go on top. Sandwiches of course always have meat on the bottom, cheese over the meat, lettuce, tomato, and other toppings go over the cheese. More Italian dressing over the toppings if desired, the top half of the roll can be drenched in dressing also. Additional condiments on the top may not even get tasted, if they are integral to the sandwich they need to be on the bottom beneath the meat.

I should add the best bread is thin, but tastes good by itself, adds to the texture of the sandwich and easily holds the thing together. Wraps do not taste very good, so are not as good as decent bread. Toast is fine. There is some variability for specific sandwiches and anything dipped in hot liquid requires some substance.

The problem with Subway isn’t the size of the bread, but that it tastes like nothing. A place that advertizes baking its own bread should have bread with some flavor, right?

If the bread ratio is too high it dries out my mouth and eating the sandwich becomes unpleasant. I like a smooshy sandwich with a very high contents to bread ratio – 4 to 1 at least.

The Jim Gaffigan bit on Subway is very funny; one of his best. (Paraphrasing): “They give you three slices of salami like they are peeling hundreds of a roll. Here you go. Buy yourself something nice. Pat. Pat. Pat.”

One of the many minor take-aways that I’ve gotten from watching Bobby Flay’s TV cooking shows is … he tears out a lot of bread from the bread, greatly altering the stuff-to-starch ratio. Judges on Beat Bobby Flay comment favorably on it often enough that I think it skews the result (by becoming a bit of a trademark move for him).

I also watched this on America’s Test Kitchen when they made a pan bagnat and tore out a fair bit of the bread. In that sammich, it also served to help prevent ‘leakage.’

I think most real chefs are sensitive to this ratio, and would do the same given some thick hunk.

I was watching a YT video of a sandwich maker explaining why subs taste better. One of the things he noted was that the sandwich was rolled in paper tightening everything up for a better mouthfeel.

The sandwich I referenced above, after its completion, was wrapped (apparenntly, tightly) in ‘cling wrap,’ and then pressed under – IIRC – a large cast iron skillet for something like a half-hour.

I always thought Jason’s Deli went a bit over the top with its New York Yankee sandwich, but I never complained either. 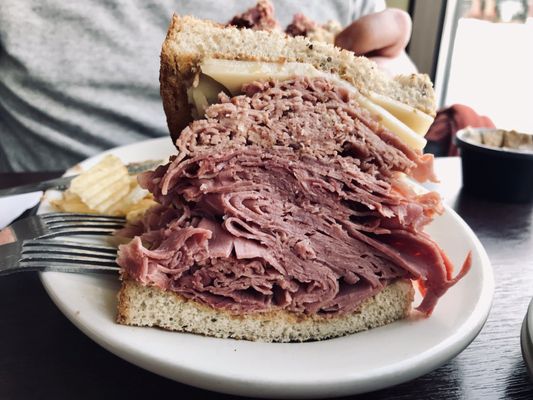 One of the many minor take-aways that I’ve gotten from watching Bobby Flay’s TV cooking shows is … he tears out a lot of bread from the bread, greatly altering the stuff-to-starch ratio.

We did that at Jimmy John’s like 25 years ago, and I assume they still do. That’s a standard sandwich technique. I don’t like my bread too heavy on my sandwiches, but I want bread, not 20 lbs of meat between an ounce of bread like at NY Kosher style delis. Subway’s bread to meat ratio is just about right for me, but their bread and meat are not very good. But that’s the right ballpark. 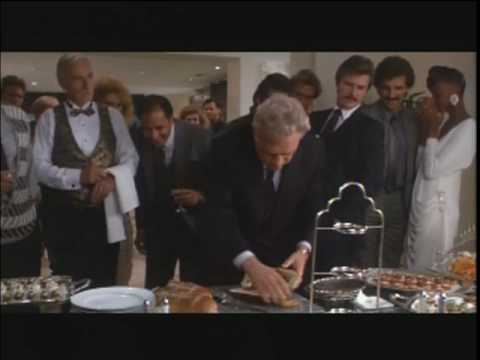 Disagree subs do taste better. You could make a grilled cheese out of simple ingredients: cheap bread, mayonnaise, slices of cheap, mediocre cheese. If made with care, it would taste as good as something pricy. And it could be easily improved. The wrapping has a psychological effect, perhaps, nothing more.

I always thought Jason’s Deli went a bit over the top with its New York Yankee sandwich, but I never complained either.

Dayum! If I were making a sammy at home, no way I’d go with that much filling. But I’m a carnivore so as long as it’s sufficiently moist, it’s all good.

I like Subway’s bread ok. Artisan would be better, but it isn’t bad. 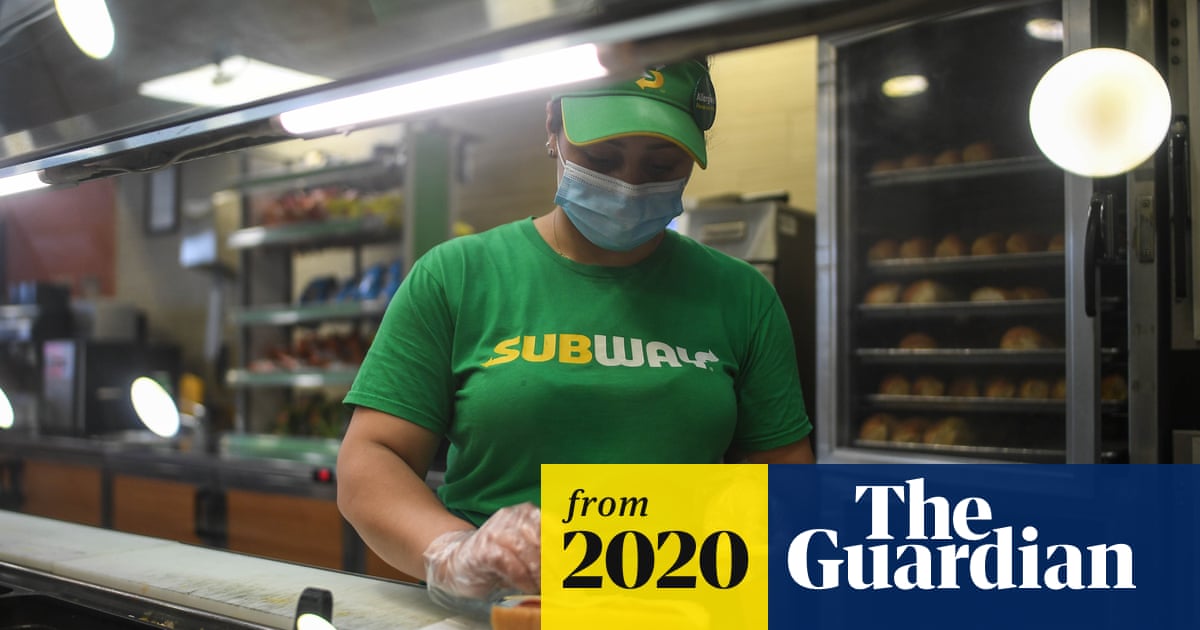 I like my bread wide enough so that the ingredients don’t fall out. I don’t mind slightly thick bread as long as it is soft. I’d prefer Subway bread to be slightly thinner because it is slightly hard most of the time. Ironically, when places make their bread thinner, they often feel it gives them license to make their bread harder, too.

the best sandwiches have large amounts of content and just enough bread to keep things together.

I prefer sandwiches on sliced bread as opposed to submarine loafs. Unless the loaf is a baguette.

Sure. If the content is questionable and the bread is good, you go with the bread. If you want to taste the contents, less bread is better.