Should I change the colour of my motorcycle? 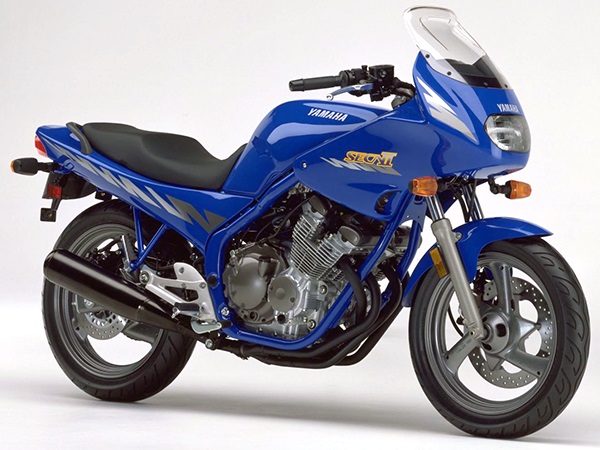 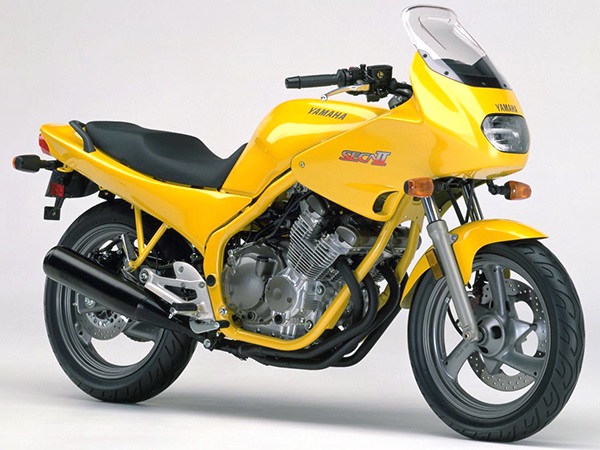 The yellow was stunning. The ‘reddish’ was subliminal in the sunlight; something you might detect out of the corner of your eye. Without seeing it, I guess I’d have to describe it to you as ‘pearl yellow’. Knowing me though, I thought it might attract too many tickets so I opted for the blue one.

As you know, my ride was stolen in July and was recovered last week. In addition to a lot of missing parts, the heroin addict(s) painted all of the plastic, part of the frame, and most of the tank flat black. Despite it making absolutely no sense to restore it, this motorcycle has a lot of sentimental value. So the question is this: Since it needs to be repainted anyway, should I paint it the yellow I really wanted? Or should I return it to its original blue?

I have not seen the graphics available anywhere, so if I repaint it blue it still won’t look like it did. But it’s always been blue. On the other hand, the yellow is, as I said, stunning and it doesn’t need the stickers.

I don’t need an answer fast. Due to cashflow issues, I’ll be riding it with the flat black paint on it for a while.

I only want to mention that the pictures won’t be visible for everyone.
For some reason, some people (including myself) cannot view pictures stored there.

I googled the motorbikes and I saw the two colors. They’re both beautiful.
I would opt for the yellow one, but the blue is also nice.
Hard to make a choice.

I can see the pictures by clicking the icon in the top left corner or the number in a circle on the right.

I don’t like yellow but it’s not my bike. If you’re going through effort then get the color you wanted in the first place.

I can see the pictures by clicking the icon in the top left corner or the number in a circle on the right.

Oh, that’s how. Thank you for the tip.

They’re both gorgeous colours but would you consider something custom? How about Tangerine Scream from the Focus ST? It’s a great colour and would really pop on a bike.
https://www.google.com/url?sa=i&url=https%3A%2F%2Fwww.carthrottle.com%2Fpost%2F2zq7zky%2F&psig=AOvVaw1483HGzI9ETZxqGHWf_fdN&ust=1602945271128000&source=images&cd=vfe&ved=0CAIQjRxqFwoTCKjOjtOquewCFQAAAAAdAAAAABAD

They’re both gorgeous colours but would you consider something custom? How about Tangerine Scream from the Focus ST?

Heh. I thought about leaving it as-is; sort of a ‘battle scar’ style of thing. But no, it will either be blue or yellow.

The yellow Yamaha put on the Seca is only second to the yellow they painted the RZ350. Gonna be spendy to duplicate that subtle red glimmer from the factory.

My ‘stolen/recovered’ bike remained ‘battle scar’. Got the perps blood all over it!

I’d go yellow. You wanted it before (and chickened out, if I can be so bold), plus having it painted yellow will feel like having a new bike.

(and chickened out, if I can be so bold)

I prefer to say I made a strategic decision.

I once had a car that color, and it was stunning.

It looks like the opinions are overwhelmingly in favour of Reddish Yellow Cocktail. (I should have made this a poll, but didn’t think of it.) I keep looking at the pictures in the OP, and I like them both. But I’m starting to lean more toward yellow.

ETA: FWIW, I called the County Prosecutor’s office and was connected to the restitution person. Given that the thief is a heroin user/dealer (he was caught with heroin and paraphernalia in his backpack), appeared to be in his early-20s, lives a transient lifestyle (‘couch surfing’), and he’s not exactly a brainiac to be riding around on a stolen motorcycle, I told the County person that I’ll never receive anything; but I wanted to put a claim on record anyway.

I had a yellow car (Volvo) and people kept stepping off the curb when their hands up before they realized it wasn’t a cab. Annoying as heck.

I like the yellow on the bike though. I’m doing my Guzzi 850T in white with black stripe over the winter, but I thought about yellow because of the current V9…

Rule of thumb for cars is repainting a significantly different color is a real can-o-worms unless your budget is nearly unlimited. Bikes are much simpler, but there’s still a lot of frame on that model that started out blue and needs to become yellow.

So you’re looking at a complete teardown and a complete strip, prime, and repaint. With all new plastic parts. That gets spendy. And even if well-done will have comparatively crappy corrosion resistance compared to a factory job. Which doesn’t matter in Barstow but will in Seattle.

You might do as well to buy another, perhaps newer, similarly yellow motorcycle. Yes, this one has sentimental value. But all the dollars and heartache you save will have sentimental value too.


One more question Johnny. What’s up with the colour vs color in your title? Hoping to fool the Mounties into letting you pass for Canadian and emigrate North after the election goes the wrong way?

I don’t see the photos in line but if I right-click and “open in new tab” I see them.

if I right-click and “open in new tab” I see them.

One more question Johnny . What’s up with the colour vs color in your title? Hoping to fool the Mounties into letting you pass for Canadian and emigrate North after the election goes the wrong way?

He’s done this kind of thing before but he passed the standard citizenship test.

LSLGuy: Of course it would have to be stripped. It never occurred to me to paint over the spray paint. I can’t get new – or used – plastic parts. The ones I see are the wrong year or the wrong colour. I’m not buying a new(er) bike. I already have one. The Seca II will be a ‘work in progress’ as I can afford to work on it.

I chose the more aesthetic spelling in high school. It’s too late to change now, even if I wanted to.

I am partial to the original blue. But since you are looking at a major repaint and rehabilitation, go ahead with the yellow.