You know what I mean. The original DC Supergirl in the Superman costume, except the pants were a blue skirt. Superman imprisoned her in an orphanage as his “secret weapon,” and she went along with it for some reason. She should have busted his jaw and gone out to do her own thing.

Sometime around 1969 or 1970 they started giving her ludicrous “mod” outfits. When did that start, exactly?

Asking because I just online bought the SUPERGIRL ARCHIVES VOL 2, and I’m wondering what I’m getting. I skipped VOL 1 because I assume they were more 50s-early 60s inane. Nostalgia thing.

“Linda Lee” was put into Midvale Orphanage because she was only about 10 or 11 years old, and was, literally, an orphan. .

Unlike most comic-book characters, she aged over the years, and Superman, after the Lesla Lar affair, ca.1960, revealed her to the world.

She famously died during “Crisis on Infinite Earths”.

Supergirl was a secondary strip in Action Comics until she got her own title in [1972](mod deleted link). That seems to be mod-ish to me. The late 60s Action strips look like the same old Supergirl, but I only did a quick scan.

I checked at (mod deleted reference), the site I linked to above. It’s got seemingly every old DC comic scanned onto it. You can use the Comic List button to find titles and then look at individual issues. Unbelievably good resource for searching old DC and Marvel comics, although it’s missing many of the older and obscure lines.

Wow, thank you. I wouldn’t have spent $24 on the book if I had known I could read them all online!

But I remember reading about her in ADVENTURE COMICS, along with the Legion of Superheroes. Is my brain dying?

So she was in ACTION rather than ADVENTURE? I can’t remember the comic books i read over fifty years ago? What is WRONG with me?

Anyway, no one is answering my initial question. Please?

I loved the parallel world story where “Lee Lindy” was the famous superhero Supergirl, and her cousin “Ken Clark” was not known to the world.

Only read the comic books up to about 1969. Superseded by MAD magazine. Just curious about when Silver Age Supergirl turned into medallion belt/red hotpants Supergirl.

She was a member of the Supes, but never shared Adventure with them.

Anyway, no one is answering my initial question. Please?

You mention hot pants in a later post. They’re on the cover of [the next series starting in 1982](mod deleted link)

That’s much later than you thought, but if you can’t remember my post of an hour ago your memory is even worse than mine. /s

She famously died during “Crisis on Infinite Earths”.

But she is much better now.

Sometime around 1969 or 1970 they started giving her ludicrous “mod” outfits. When did that start, exactly? 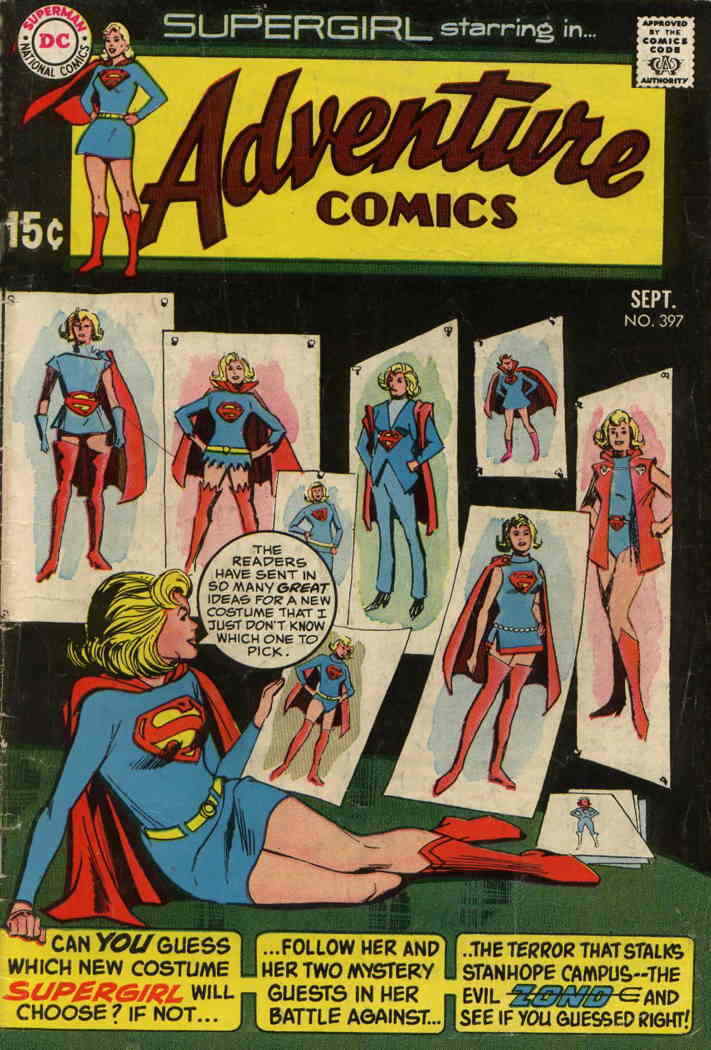 Wow, thank you. I wouldn’t have spent $24 on the book if I had known I could read them all online!

If you spent $24 on the book, you probably actually purchased legal access, so I wouldn’t feel bad about it.

Huh. I hunted around for Supergirl titles and never saw a reference to her taking over Adventure. For the record it was in #381, May 1969, following the Legion of Super-Heroes. The costume chosen was basically a long-sleeved, gloved version of the second one from right, super-high boots, super-mini skirt and a belt that I suppose could be called medallions. They changed her costume several more times in 1971 and went to the hot pants outfit with a regular belt from #410 on.

I apologize for casting aspersions on Ike’s memory, although he seems to be conflating the 1969 and 1971 looks. I was reading only Marvel at the time so I have no memories of my own.

There’s a reason you can read all of those comics for free on that site even though the legal owners of the rights to those comics charge money for them. It’s a pirate site.

I also apologize for the site. I assumed they had the rights, since they’re so amazingly complete. They’re not the only ones either. I’ve found other sites that are about as thorough.

I also apologize for the site. I assumed they had the rights, since they’re so amazingly complete. They’re not the only ones either. I’ve found other sites that are about as thorough.

The completeness is one of the indications something’s not right. If a site has amazingly complete collections of Marvel and DC and Dark Horse and Archie Comics and just about every other publisher, and they aren’t charging any money for access to any of that content, well, if something seems like it’s too good to be true, it probably is.

Marvel and DC both have proprietary digital subscription sites, and smaller publishers either have digital subscriptions or sell their digital content directly or through Comixology. How would a third party distribution site possibly afford all of those licensing fees without charging for access, and why would any publisher license their content to be given away?

I skipped VOL 1 because I assume they were more 50s-early 60s inane. Nostalgia thing.

But the “inane” part is SO entertaining. In a “so cheesy, it’s become cheetos” kind of way.

I bought Vol. 1 and Vol. 2 from Comixology dot com … (electronic versions of graphic novels for half the price of Dead Tree ones, and you can advance panel-by-panel). Wait for the sales if you want 1/3 the price…

That said, many (perhaps even a majority of) comics have fallen into the public domain and are available on my favorite place on the entire Internet
https://digitalcomicmuseum.com/

Yeah, comiXology.com (now owned by Amazon) is a legitimate site. You can also get a fair amount of comics free through Kindle Unlimited (but you are at the mercy of what publishers and Amazon choose to make available - it’s more take what turns up than seek out specific titles). And digitalcomicsmuseum.com is also a perfectly legitimate site, and it’s great if you want public domain Golden Age comics.

Thanks for the tip!