'Snow joke out there. Dopers in areas that get a lot of snow, how do you deal with it?

I was watching the local news yesterday and the sports guy was saying that the Bills game was being moved to Ford Field in Detroit because Buffalo was expected to get 4 to 6 feet of snow. 4 to 6 FEET? I thought, since he was the sports guy and not the weather guy, he was exaggerating. But he was not.

It seems like the east coast has gotten clobbered with snowfalls that are a couple feet at a time on a regular basis in the last 5-10 years.

I understand that the reason for all the snow that Buffalo is getting is due to Arctic winds coming in and blowing over the warmer Great Lakes, picking up a lot of moisture. So is all this snow over the past several years a product of global warming, because the Great Lakes are warmer than they’ve typically been in the past?

In any case, I hope you Dopers out there in very snowy areas stay safe, warm and well supplied.

I fucking hate snow, and cold weather in general. I don’t deal with it, I just try to survive it.

We go to the Caribbean for two weeks, which helps.

We have too much property for a snow shovel to be useful, so we don’t own one. No snowblower because our “driveway” is too long. My gf has an Arctic Cat with a snowplow. If there is too much snow for my Jeep to muscle through, I’ll plow it. I plowed once last winter and I’m just getting over the exhilaration.

We’re near Boston, so we rarely get huge amounts of snow, 2’-3’ is the maximum I’ve seen in a single storm or series of storms. We shovel, hunker down, keep enough food on hand in case we can’t get out to the stores, and I work from home.

Then we go skiing.

I was watching the local news yesterday and the sports guy was saying that the Bills game was being moved to Ford Field in Detroit because Buffalo was expected to get 4 to 6 feet of snow.

We have a gravel driveway that is 0.2 miles long. It also has a 90° turn and a hill. It’s difficult to get up it in the summer due to the deep ruts. When it snows? Forget it. We’ve tried getting someone to plow it, but it destroys the driveway even more. We’ve found it much cheaper to simply drive old, four-wheel drive vehicles. Delivery vehicles have to leave packages way down by the mailbox, behind a tree.

The could probably hold the game, but getting to and from the stadium for fans would be dangerous and/or impossible.

All services are provided in my apartment complex; mowing, trimming, flowers, gazebo, etc, in the summer, but also shoveling, salting and even the cleaning off of our cars in the winter. My problem is my commute because I leave at 5:35 in the morning, so my car isn’t cleaned off, the snow is not yet plowed and removed from my lot, and the side streets are very bad because plows are busy with the interstate highways. Sometimes getting the 2 miles to the interstate takes as long as the drive on the interstate itself. Fortunately, my exit is a major street, so it usually has had at least a cursory plowing by the time I get there.

I’ve lived in Montreal and the Ottawa areas which, depending on the vagaries of climate change, used to have tons of snow and sometimes still do. We now have a snow-removal service in Montreal so I only do clean-up shoveling (porch, berm at end of driveway etc) as well as maintaining a cleared path to our suburban shed. I also have a winter-specific bicycle that I’ve been using since the late '90s that I love riding if there hasn’t been freezing rain or too much snow.

Unfortunately with climate change winters have changed from fairly cold with lots of snow to warmer with miserable freeze-thaw cycles at shitloads of icy sidewalks etc.

I fucking hate snow, and cold weather in general.

Same here. Lived here all my life and have never gotten used to cold and snow. Fuck it.

We have a gravel driveway that is 0.2 miles long. It also has a 90° turn and a hill. It’s difficult to get up it in the summer due to the deep ruts. When it snows? Forget it.

We have a long gravel driveway too. I’ve used a 22HP lawn tractor with a shovel attachment for the last 16 years or so, but even weighted down, with chains on the tires, it’s barely adequate to the job. If it snows more than 6" or so I have to get a running start to move any snow at all.

I just acquired an '86-'87 Honda Fourtrax 250 ATV with a shovel attachment and I’m hoping it does a better job. I thought I’d have a couple more weeks to tune it up and figure out how to properly operate it before the snow started falling though!

I live in rural southeastern Missouri. Winters here are … well, they’re winters: cold, snowy, icy, all that. BUT, they’re considerably more forgiving here than they are in Central Illinois, where I grew up and lived for much of my life. So there’s that.

A four-inch snowfall will shut down schools for a week, because so many kids live on hilly, backwoodsy gravel roads that school buses can barely get to on a good day. In town, the streets are generally plowed within a couple of hours of the last flake falling. There’s no municipal powing, it’s crowdsourced to a guy who happens to have a plow attachment on his truck.

I have a snow shovel. Somewhere. Usually I’ll just pour rock salt on my sidewalks and it does the job. As for my driveway, I WFH so rarely is there any urgency to go anywhere. With most snowfalls, it’s melted within 36 hours anyway.

I understand that the reason for all the snow that Buffalo is getting is due to Arctic winds coming in and blowing over the warmer Great Lakes, picking up a lot of moisture. So is all this snow over the past several years a product of global warming, because the Great Lakes are warmer than they’ve typically been in the past?

Lake-effect snow in the region has long been a product of late fall/early winter cold air blowing over lakes which haven’t had time to cool down from the summer. There’s at least one study (apparently still ongoing) to explore whether climate change has had an effect on lake-effect snows. 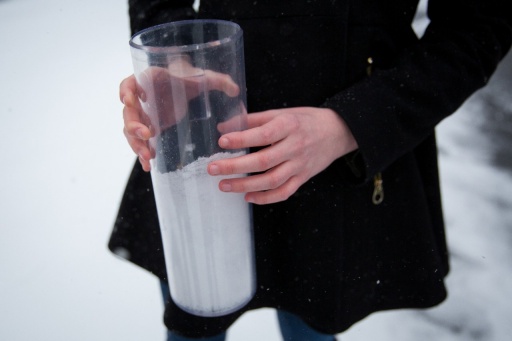 Project will lay the foundation for understanding how lake effect snowfall could change in a warming world.

We live in Montana and face this kind of weather every year, but it never makes the news. We don’t have massive traffic jams and the only people who die are thrill seekers and tourists. You learn to deal with it or you move. It’s called embracing winter.

I live on the outskirts of New York City, and although we get some snow each year and a big one now and then, I miss the heavier snows from Los Alamos where I (partially) grew up.

I seem to be wired to love snow (and hate rain). I get high on the stuff, dancing around in joy and delight.

On the practicalities, we have a gasoline-powered snow-thrower for excavating the sidewalks and a cheap plastic snow shovel for the places and spaces the snow-thrower won’t go. I make it so the sidewalks are clear and there’s a hole in the snow-mountain for people wishing to cross the street (we’re on the corner lot), and dig out the driveway so the car can get out. We lift the windshield wipers up in the air when we know a snow is coming. I bring in a few extra loads of wood from the woodpile for the woodburning stove, so I won’t have to go digging for it. I have boots that come up high enough and aren’t disposed to soak through even if I step down into a deep puddle of snowmelt.

Also in Montana, previously in the high country of CO. The interstate closes regularly because of crashes and 2 lane streets in town become 1 lane. We have a tractor with an 8’ blade and a 7’ snowblower. I go skiing. In CO it was a mile and a half to the paved road, and that road (CO145) sometimes closed due to avalanche. There you just had to stay home every so often. I had to chain my truck up to get back into the house one Christmas day after skiing for 4 hours–it had drifted 4’ deep in that time and the plow guys weren’t working the holiday.

Me too. Nothing better than sitting in my Bermuda shorts at an outdoor patio bar someplace watching them play blizzard-ball on wide-screen TV!

COVID proved they can hold a game without fans (and hence without all the fan-support employees) in attendance. I could certainly see the NFL deciding to play a truly yuge blizzard bowl without fans as well. Not a decision they’re likely to make when you consider the cost to their bottom line but it’s not logically impossible.

There’s a better-than-average chance that the Bills will host one or more playoff games in January. Would the NFL move a playoff game because on an impending blizzard? Doubtful.

Would the NFL move a playoff game because on an impending blizzard? Doubtful.

If it’s going to dump 5 feet of snow, what choice would they have?

IANA expert on Buffalo snowfall, but ISTM the monster lake effect dumps are much more likely in early winter than in e.g. the last week of January. “Less likely” doesn’t mean “impossible”, but that’s probably a chance the NFL is willing to plan to take.

IANA expert on Buffalo snowfall, but ISTM the monster lake effect dumps are much more likely in early winter than in e.g. the last week of January.

That makes sense, since the lake effect dumps are from the first Arctic winds that blow over the lakes which are still relatively warm, picking up tons of moisture. By January the lakes have cooled down plenty.

I have a short bed dodge (no extra-cab) with a plow on the front and a 10,000 lb Warn winch on the back. It’s chained up on all four wheels. The short bed aspect with no extra cab gives me a tighter turning radius with is very important.

I also have a Kubota 4x4 tractor/loader chained up on all 4 wheels. That comes out about twice a year to push/move snow that the truck can’t deal with anymore. Clear out the snow storage areas, and where we throw snow off the deck before the snow pile gets too high and you can’t throw over it any more.

Equipment, that’s how I deal with it.

I’m on my second plow truck, and second tractor. It’s tough duty on them.

When I had my hip replaced, I hired a guy to plow for me. The idiot got stuck 4 times and I had to pull him out. He did not ask to renew the contract. He was in a bit over his head.

Winters are long, but can be beautiful and brutal at the same time. Summers are fantastic, short as they are.