So I just tried real licorice, and am pretty impressed

I’m one of those folks who can’t stand black licorcice candy. I find the flavour revolting—almost nauseating. Give me a bag of assorted-flavour candy, and I’ll hand it back to you with all the icky black ones rattling around forlornly at the bottom of the bag.

I was vaguely aware that there is also a licorice plant that the candy is named after. However, I always figured that it’s one of those botanicals that’s never used any more, similar to how root beer is no longer made with real sassafras root and marshmallows are no longer made with real marshmallow root. Indeed, it seems that pretty much all licorice candy these days is flavoured with anise, to which I have the same aversion.

But last week I was strolling through a local market and found someone selling actual licorice sticks—not the sugary confection, but the raw roots. I bought a bunch to try them out and was pleasantly surprised.

The sticks are about 20 cm long and 1 cm in diameter, covered with smooth brown bark, extremely rigid, and strong enough that I can’t snap them in two with my hands. I put a stick in my mouth and was quite taken with the flavour. The first thing that struck me was that it doesn’t taste very much like anise or licorice candy (though there is a passing resemblance). The second thing was that it’s surprisingly sweet, a bit like stevia. The sticks are far too hard to chew, but you can suck and gnaw on them. After fifteen minutes or so, the bark starts to disintegrate and becomes less palatable, sort of how chewing gum loses its flavour after a while.

Anyone else tried real licorice? Is it as rare as my experience suggests? (Last week was the first time in 40 years I ever saw it for sale anywhere.)

The idea goes way back in time. You might find this interesting: Teeth-cleaning twig - Wikipedia

Chew sticks are twigs or roots of certain plants that are chewed until one end is frayed. This end can be used to brush against the teeth, while the other end can be used as a toothpick. The earliest chew sticks have been dated to Babylonia in 3500 BCE and an Egyptian tomb from 3000 BCE; they are mentioned in Chinese records dating from 1600 BCE, in the Ayurvedas around 4th century BCE and in Tipitaka, in the Buddhist Canon around the 5th century BCE in India.

Wow, I never knew this! Now, I have to find and try the plant!

Actually, I love black licorice, but it is too sweet. The plant sounds promising.

The second thing was that it’s surprisingly sweet, a bit like stevia.

Odd you should mention that-- whenever I’ve tried using stevia as a sweetener, I find it has a licorice aftertaste that is pretty persistent.

In retrospect, I probably shouldn’t have been surprised at the sweet taste. After all, the plant is called Süßholz in German (literally “sweet wood”) and that’s how it was labelled at the Viennese market I bought it from.

Yes, I have, both in Germany and in Spain. It’s good! If you are in Austria (a more or less German speaking country

) you may be interested in the expression “Süßholz raspeln” the next time you want to whisper sweet nothings into someone else’s ear.

I had some of those when I was a kid back in the 60s. I loved black licorice candy but now the flavoring is heavily mixed with anise and sweeteners and it just comes out wrong. I don’t find much of the black either, it doesn’t seem to be too popular and if it’s on the shelf somewhere it’s prolly old and dried out. Real licorice sticks were used as drink stirrers sometimes. I remember the place we’d go and get sodas at the counter and sometimes they’d have some sticks from the bar next door and put them in our drinks.

They used to sell those at the old timey drug store on Main street in Disneyland, and I loved them.

I can’t find them anywhere.

Do note that any real licorice flavored stuff should not be consumed to excess.

I had some of those when I was a kid back in the 60s. I loved black licorice candy but now the flavoring is heavily mixed with anise and sweeteners and it just comes out wrong.

I wonder exactly when and why anise became the dominant flavour in black licorice. Is it so much cheaper or more convenient to use anise?

I wonder exactly when and why anise became the dominant flavour in black licorice. Is it so much cheaper or more convenient to use anise?

As I said upthread, real licorice can be dangerous if eaten to excess. I think it is something like a half pound per day, day after day, but still…

Sure, but is that the reason it’s not used any more? Plenty of other popular foods are also toxic when eaten to excess.

Sure, but is that the reason it’s not used any more? Plenty of other popular foods are also toxic when eaten to excess.

The thing with genuine black licorice is that it has a specific effect that can cause serious kidney damage, hypertension and heart problems, especially in those with certain conditions.

“…it is important to realize that black licorice is more than just candy. It contains glycyrrhizic acid, which can cause swelling and high blood pressure and deplete potassium and other electrolytes that may cause a cardiac arrhythmia or arrest.”. 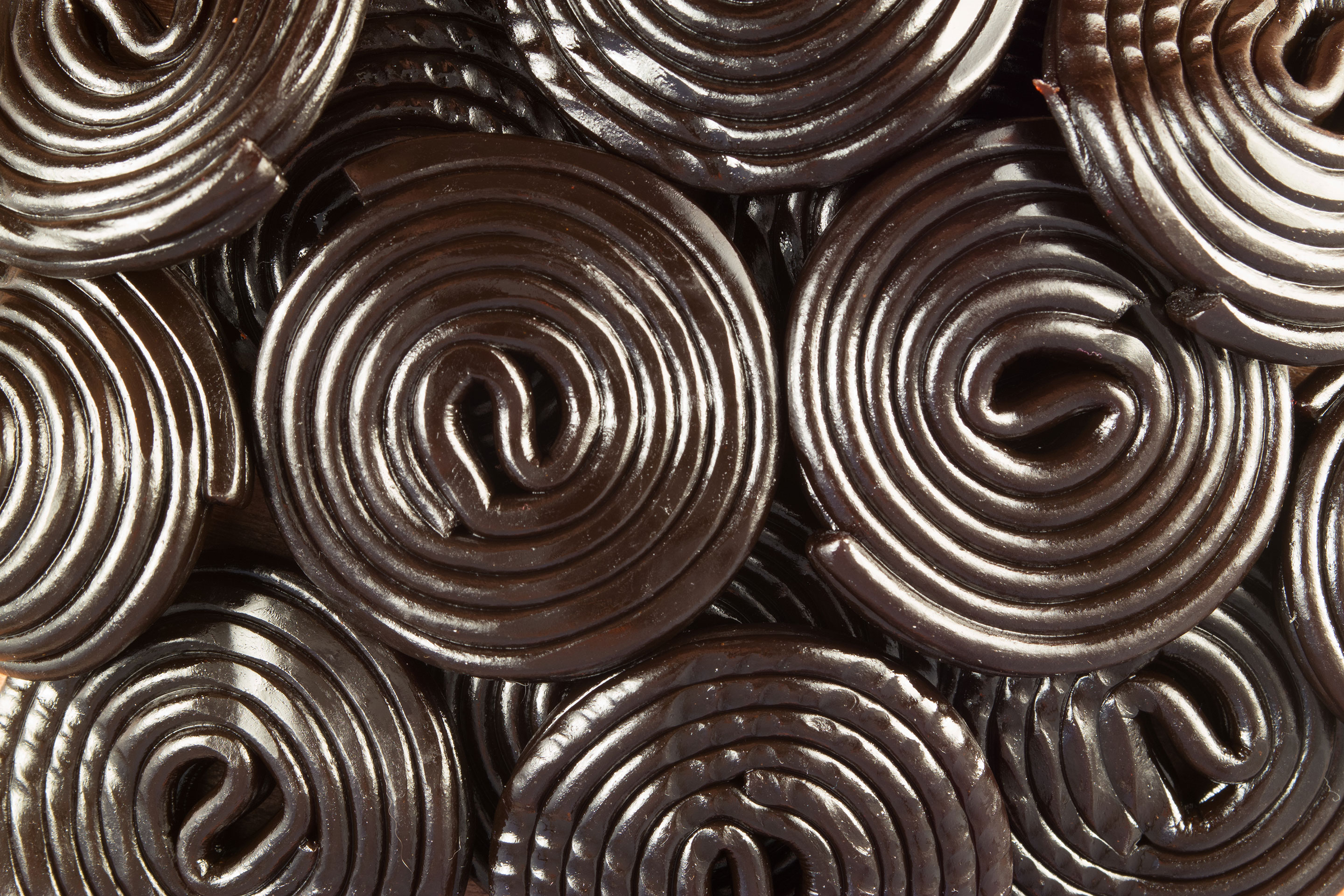 The real deal licorice is very good, so you can see why some people might overindulge to the extent of eating more than two ounces a day for a couple of weeks or more, which could be problematic. An occasional treat in moderation is thought to be safe.

The last time I bought the real thing was at Trader Joe’s; it was imported from Australia. There’s no comparison with faux black licorice.

I occasionally get a craving for Good & Plenty. A bag satisfies my licorice fix for several months.

Licorice root reminds me of chewing sugar cane. You cut a piece between two joints. Peel it. Then cut into small wedges.

Chew carefully and enjoy the juice. Spit out the fiber material. Repeat with another wedge.

It will tear up your gums. They’ll be sore for a couple days. It’s been at least 15 years since I had sugar cane. My dad brought it back on trips to see family in Louisiana.

I wonder if Licorice root stains your teeth and gums black?

There’s a chemical in licorice root called glycyrrhizin that’s 30 to 50 times as sweet as sucrose.

The danger in eating too much licorice is that it depletes potassium, which can lead to high blood pressure and irregular heartbeat. It can also interact with medications.

I like black jelly beans, too, although they’re not as appealing since I overindulged and saw them, ahem, results the next day. That “black” dye is actually green, and the GI tract can only process a certain amount. This was also why those black Halloween buns sold by Burger King one year did not have much repeat business.

Glycyrrhizin was, in the good old days, a common ingredient in cough syrups.

The last time I bought the real thing was at Trader Joe’s; it was imported from Australia. There’s no comparison with faux black licorice.

For some reason the local hardware store and farm supply store always have the best candy, including the Australian licorice. I usually grab a bag while I’m standing in line. I never really noticed if it was flavored with anise or actual licorice. I’ll have to check the ingredient list next time.

And yeah, as a black licorice lover it’s really easy to overindulge.

I’m a licorice and an anise fan. I love the real licorice which is mainly of European manufacture. But I’ve abstained ever since a licorice scottie removed a gold crown from my molar. Gave me a bad taste in my mouth …

I do the same.

I love black licorice. Though I’m not sure if I’ve had the authentic stuff. But interestingly, I can’t stand red licorice. I even hate the smell of it.