XCOM had a fun RNG system. It was a true (pseudo)RNG, but the current state was saved as part of the save game file. In principle, this eliminated save-scumming, since no matter how many times you reloaded you’d always get the same value.

I’ve never really understood why game creators care about save-scumming. If someone wants to do it, let them. It doesn’t hurt you in anyway.

I mean, I understand that many Rogue-likes and Rogue-lights is that you can’t save-scum, but that’s kind of their idiom. It’s part of what makes the genre.

But it would seem more effort to me from a programming standpoint to only allow saving at fixed points, and at the end of the day, what does preventing it actually get you?

I mean, I understand that many Rogue-likes and Rogue-lights is that you can’t save-scum, but that’s kind of their idiom. It’s part of what makes the genre.

There’s usually a way to do it, such as making a backup of a file and replacing it when you don’t get the result you want, but agreed there’s often no way to do it in the game itself.

Um, not that I would ever save-scum or stair-scum. My friend, he did it. Yeah, not me.

I’m making progress on my little project. I get back from the floating island at around the 51-52 minute mark with every blueprint I need except Scanner Room, Alien Containment, Water Filter and Plant Shelf. I also have every seed I need to complete my gardens except the Bulb Bush, with the caveat that I still have to physically harvest the three local seeds I plant: Creepvine, Brain Coral and Acid Mushroom.

It’s possible I can build everything I have blueprints for before the Aurora explodes. I’m not that far off from already having enough gold/silver/lead to build the modification station, vehicle upgrade bay, battery charger, laser cutter and propulsion cannon. The biggest challenge is starting to look like Copper, but I think that’s solvable.

The idea was originally to end the scripted portion of my run sitting atop the LifePod watching the Aurora explode, after which I climb down the ladder, craft and equip a Radiation Suit, The End. But my base wouldn’t technically be complete yet.

So now I’m thinking 90 minutes instead of 60. After watching the Aurora explode, I climb down, craft a radiation suit, then board my upgraded seamoth (depth mk 1 plus 3 storage lockers) and head straight out to repair the Aurora. The Aurora is on rails; that could easily be a single 15-minute take from start to finish, not counting travel time. On the way home from the Aurora I’m thinking I swing by LifePod 12 to pick up Bulb Bush for my gardens as well as Water Filter and Alien Containment blueprints. That would give me everything I need except the Plant Shelf.

So then I get back from the Aurora, finish the base, sit down on my bench in front of my garden and open the PDA to start reading, The End. I’m looking at this as like a play or movie. Scripted.

In related news, I finally broke down and watched a speed run. Technically this means I have been spoilered, but I didn’t really understand or absorb the sea lady part. I intentionally tried to tune that stuff out. But I wanted to see what actual speed runs are, so I watched the current glitchless record from cinnamon cookies: 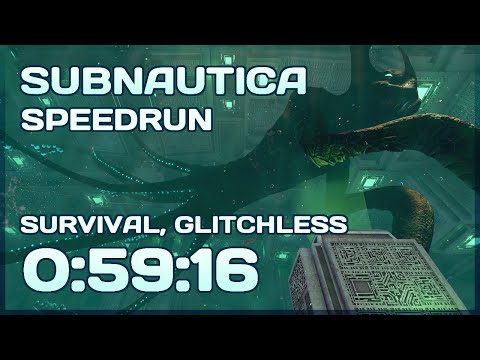 The primary rule for a speed run is that it must be a single segment. You cannot save and reload at any point. My 60-minute run has five segments total, then I’m envisioning maybe three more segments for the extended version. I could theoretically do it all in one take, but that’s more memorization and practice than I’m willing to commit to. I also couldn’t stomach having to restart 15 times every try waiting for a good location.

That’s clearly what they did for the record run above, I think. Their LifePod just happens to be right next to where they build their first “base.” Zero chance that was coincidence. They do write about almost giving up but then getting finally getting a lucky spawn. Starting location probably wasn’t the only factor that needed to come up just right. Taken all together it must have been brutally tedious.

Speaking of their bases, they build two permanent bases, and both are a just a single I compartment. The first base has two each solar panels, large lockers, and fabricators. They keep two fabricators running non-stop for minutes at a time. It’s jaw-dropping. Their second base has only a single solar panel, small locker, and fabricator, out by the tower gun that shoots down the Sunbeam.

And finally, everything in the run is all optimized for speed. They never even build a seamoth because that would just slow things down. They use suicide as transportation, building an unpowered single-room habitat to enter and exit (and then deconstruct) right before suiciding so no gear is lost.

So I’m not doing anything like that. I’m not interested in doing it all in a single take, though currently my segments are around 15-20 minutes each. I’m not interested in building the least amount required; in fact building a nice base is kind of the entire point of what I’m doing. Not only am I building a seamoth, I’m upgrading it. Death is right out, though I run Survival instead of Hardcore because I like oxygen warnings.

In fact, now that I mention oxygen warnings, one of my main “rules” is “Respect the Animation.” If Riley just gets to the surface and is gasping for air, I wait for him to finish catching his breath before diving back under. If he equips a new tool, I let him check it out without interruption. (I’m usually moving while he does it, though.)

Watching that run was incredibly impressive, but in the end I was kind of happy that it’s not at all what I’m looking to do. My run will definitely come off poorly by comparison, no doubt, but it’s not really the same kind of thing so wouldn’t invite comparison. If I had to name it, I’m doing a 90-minute base building challenge with up to 8 segments allowed.

The glitched speedruns are a lot more fun. Super seaglide, clipping through the Aurora long before it explodes, deconstructing moonpools for titanium in one of the weirdest duplication bugs I’ve ever witnessed. They’re just over 30 minutes.

That speed run was a fun watch, thanks for the link!

The best part about it…no eating of that shitty creepvine!

But I coulda swore I saw him find a cyclops shield module, so why did he have to bother building a cyclops? This question is for anybody. I’ve only played twice, but 2nd time I tried to go without a cyclops and found I needed to build one just for the shield module (since I never found one).

The best part about it…no eating of that shitty creepvine!

With my run I’m mildly hungry when I get back from the floating island. I could cheese the gel sacs for extra seeds and eat those (not the seeds) the quickest if needed, but I don’t think I’ll need to. I only bring back one marblemelon seed so that has to grow twice before I can eat melons. That should mean that chinese potato will be my first food. I have 2 waters waiting when I get back which should be plenty to keep me going until I can start eating marblemelons and bulbo samples.

I definitely don’t need to bring food or water to the Aurora, that’s for sure. As long as I’m full and not thirsty when I head out for it, I should be bringing surplus food and water back from it.

There are no Cyclops shield modules in the world. You have to make a Cyclops to build the rocket. Are you sure you’re not mistaking him finding the shield module blueprint?

I’m not sure of anything. I was watching it at the bar and wasn’t totally focused. I probably just misinterpreted what I saw.

There is a Cyclops engine efficiency module in the Aurora engine room.

Well that was frigging amazing. I have to think using suicide as a transportation method is kind of hinky, but going from surface to the Lava Castle with a seamoth was just unbelievable. And had the programmers just randomized the captain’s cabin code of course something like this would be completely impossible.

BTW, he definitely gets the Cyclops Shield module blueprint at around 47:50 in the video. He constructs it at 57:30, right after constructing the otherwise useless Cyclops.

Just this morning finished segment 5 (S5). Here’s what I have so far:

I timed it so I just happened to be in the LifePod crunching metal scrap when the Aurora explodes so I can quickly climb the ladder to watch the show. It’s around 90 seconds into segment 5. As soon as the bulbo tree finishes growing and I can plant a second one I take off for the Aurora.

My first test pass at the Aurora took 20 minutes. I can probably get that down to 17 or 18 with a couple tries but likely no lower. I’m really digging the grav trap to help keep the bleeders at bay while I’m repairing the Aurora. It’s probably slower but way cooler.

It’s looking like I probably won’t even get under 2 hours, much less 90 minutes. Right now it’s looking more like around 2:15 all told. I’m doing my level best not to be too precious when placing things with the builder but it’s tough. The plant pots and wall lockers are the worst, and when I leave for the Aurora I’ve placed all plant pots but only 12 of 23 wall lockers.

My biggest issue is the scanner room fragments never spawned pretty much anywhere. I know of exactly three fragments on the entire map, and it’s like a 1.5 km trip to hit all three and return home. That’s excessive. Crossing my fingers that maybe some will have spawned in the bulb zone when I hit up LifePod 12 on the way home from the Aurora.

Yay for LifePod 12 coming through in the clutch. Not only plentiful scanner room fragments, but also a nice surprise. The ampeels and bone sharks are ridiculously aggressive, to the point I couldn’t just leave my seamoth out in the open. So looking around LifePod 12 for somewhere to stash it while I do a quick ruby/shale run, I find this perfectly sized cave entrance. And what do I find right next to that cave entrance? Sea Crown! The last plant I was missing, that I had never seen before, and which I’d already resigned to having to look it up on wiki to find. I found it straight up legit! I get a gold star.

The ampeels are super annoying because there’s nothing I can do about them. Bone sharks, on the other hand, I welcome them being aggressive. It’s very satisfying to jump out of the seamoth, equip my knife, and then just start stabbing the absolute s*** out of a bone shark. They turn tail and run right quick.

For ampeels, I suppose I could try launching things out of inventory at them with the propulsion cannon like a gun. Maybe gold? So annoyed every time a shale chunk drops gold.