Visit from Cousin Kara. Maybe other superheros, but I’d definitely like to see at least Kara at some point.

The show will go on hiatus in a couple of episodes, to be replaced in its timeslot by Supergirl. I am hoping that the show will incorporate a scene that passes the reins from Clark to Kara.

@mordecaiB, @RealityChuck, @Boomstick, @digs
Hey, guys, there’s some really interesting discussion going on about the nature of good superhero stories. However, it’s not really pertinent to the discussion of the show Superman and Lois, especially now that it’s moving on to discussing other superheroes like Daredevil and Spider-Man. I’ve asked a mod if he could split off the discussion into another thread.

It’s a bit of a subversion of the exaggerated physique of the cartoons and some live action shows.

In the Flashpoint Paradox animated movie, Kal-El was taken as a child by the military and kept away from the sun for the majority of his life. He is an emaciated and abused man. Once he is finally rescued and brought outside, he regains his powers despite his gaunt frame.

Sorry about that. No reason to split it for me, I’m ok with letting the hijack die here.

I’m probably trying to find something when there’s nothing there, but I’m wondering if there’s a connection between ‘Jordan being the only one to touch the crystal that came out of the pod/ship’ and ‘Jordan being the twin that manifests some semblance of powers.’ But didn’t the pipes fall on them before the boys found the pod/ship? If so, and I think it is so, there goes my obsessing-fan theory.

The pipes fell on the twins before they found the spaceship.

And Jordan was the only one who tried to touch the spaceship, Jonathan was hanging back and telling his brother not to do it. I suspect it would have responded to Jonathan if he had touched it.

Modhat: Moved the Superman comic discussion off to its own thread at the Op’s request. Please enjoy but please keep this thread to the TV show.

The best Superman stories concentrate on Clark Kent. The original Adventures of Superman did that – most of the episodes involved Kent dealing with the situation, and only showing up as Superman at the end.

The bit with Sarah reading the riot act to her mom with the Kent brothers across the booth from her is great. The two boys are clearly getting more and more uncomfortable being there, but can’t run away, either. They don’t say a word but they really communicate the sheer discomfort and “I don’t want to be here” anyone would probably feel. In the background other people in the diner turn around and start staring, too. If this show survives and develops it will be because there is so much “show” and less reliance on dialogue than many other shows.

In the last episode, when Lois stood up to fire a question to Morgan Edge, the twins were in the background, slightly out of focus, but you could catch their facepalm if you were looking. Great bit of visual storytelling.

I am liking it, good, but not great- too much teen angst.

I’m hoping that eventually Supes and Cap’n Luthor will each realize the other is not a villain. Maybe one of the surviving parallel Earths is similar enough to Cap’n Luthor’s maybe-destroyed world to be a reasonable facsimile of home. I will be disappointed if they have cast a black actor to be just another run-of-the-mill alien-hating Luthor. I want him to have more depth than that. Perhaps they will team up to deal with what appears to be Morgan Edge’s wannabe Kryptonian minions.

While I agree that slugfests can be boring,I did like the fight in the latest episode. When Supes showed up I was thinking “oooh, that kidnapper is in trouble” but then it is “He is powered, is he another Kryptonian, a Meta, a robot, or what? How strong is he, does he have other powers?)”
Then later when the kidnapper is destroyed by a 2020’s style death ray

that was a bit of a shock.

I had the sense it was “killed for failing to kill the target” more than anything else.

Killing the target and possibly exposing himself as a meta.

Yes, Lois is very plausibly the greater threat there.

Especially if you want to keep your naughtiness a secret, Lois Lane is far worse than Superman because she publishes what she finds.

Bonus side effect: The guy is heat visioned to death. Now who’s the only person we know with heat vision?

Black Luthor or Suitable Associate: “See? I told you he was a baddie!!!” 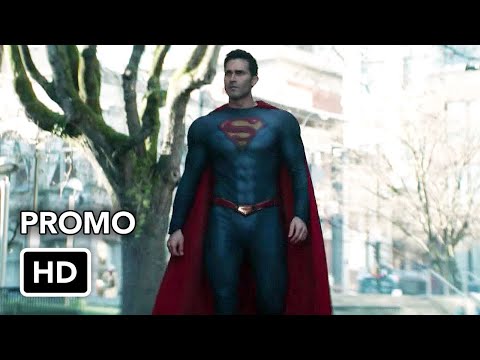 TRUTH - While sitting in the stands at the high school football game, Lois and Chrissy (guest star Sofia Hasmik) spot fish out of water Morgan Edge conversing with Mayor Dean and Kyle Kushing, and the two see right through this insincere move to try to win over the town. Meanwhile, Clark agrees to help Lois out at a town hall meeting, but things get tense when he finds himself pulled in two different directions. Lastly, Jonathan is having mixed emotions about Jordan’s newfound status.

Heh. Superman busted out the Hulk clap. Maybe he has been taking tips from this cousin Kara.

It figures that the reason Morgan Edge is in Smallville is to get ahold of kryptonite. This will also probably why Black Luthor will be coming to Smallville in the near future. Now are the writers going the Smallville route and start introducing freaks of the week? We’ve already seen two - one that assualted Lois and her source and the other actually works for Edge. This show so far has some really competent writers, so I think they could make it work.

They keep calling Jordan little & short & scrawny. To me, he and Jonathan look to be approximately the same size (and a similar size to the rest of the high school actors.) - not the tallest/biggest guy out there, but not remarkably different. Am I just not seeing something? Or is it a casting/writing failure?

They keep calling Jordan little & short & scrawny. To me, he and Jonathan look to be approximately the same size (and a similar size to the rest of the high school actors.) - not the tallest/biggest guy out there, but not remarkably different.

Who called Jordan short and scrawny? He is slightly shorter than his brother and they are both noticeably smaller than the other players on the team. They are supposed to be high school freshmen, after all.

Now are the writers going the Smallville route and start introducing freaks of the week? We’ve already seen two - one that assualted Lois and her source and the other actually works for Edge

And I was mistaken about there having been only two metas. The boy in the cast had some powers, of course. I don’t count Killgrave as he’s a techno-wizard, not a meta.