According to 538, as of today (9-15-2021) President Biden’s approval rating is 46%. That’s fairly low for someone in their first term. Will it get better in the next 2-3 years? Who knows? My guess is that it will improve because memories of Afghanistan will have faded by then and hopefully COVID will be far in the rear-view mirror. He will also be 82 in 2025, which would make him the oldest president elected by far. Biden could step aside and make way for Harris but her current approval rating is less than his. Honestly, I don’t see it getting much higher.

Who will be the Democratic nominee for president in 2024?

I think it will hinge on the mid terms. If Rs take back both houses and nothing gets done, he might lose.

Got the campaign slogan already! 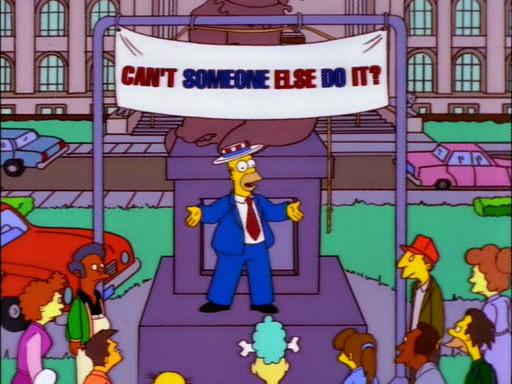 By recent standards, 46% approval rating isn’t that bad. It’s about where Obama was most of his terms and higher than Trump ever got except for the very first few weeks of his term. We’re in a hyper-partisan era where probably 40% of the people are going to approve and 40% will disapprove of ANY President just based on partisanship, no matter how their actual performance in office is. And you’re never going to be able to please ALL of the other 20%, so getting anywhere close to 50% is about as good as it gets.

We’re no longer living in the country where GWB could have a 90% approval rating right after 9/11; I miss that country and hope it returns someday, but I don’t see that happening in the short term.

As an American and a Democrat, I hope Joe doesn’t run again. I don’t want an 82 year old President. Also, American voters have a persistent pattern of re-electing Presidents and then switching to the other party after eight years. Maybe switching candidates at the four-year mark might help break that dynamic?

Interesting question: If Joe is healthy and not involved in some horrific scandal, he will certainly be nominated for re-election if he wants to be, because everyone knows that you don’t primary your own party’s President. If he decides to step down and endorse Kamala, would she get the same deference, or would other candidates feel free to enter the race? Even if the race is competitive, I have to think Kamala would be heavily favored unless she fucks up horribly between now and then.

Taking all of the above into account, I voted for Kamala.

Joe is already older than I’d like, although he was the obvious choice last November.

I just want normal people to be president. I can live with a Republican, but just please let him be normal.

The mechanics of party politics and presidential races tell me that it is Biden’s, if he wants it/is up to it.

The idea of Biden stepping aside and letting Harris take the reins is the stuff of fantasy and GOP fever dreams (to me, for now). But let’s play along for a moment. I believe Harris showed she was not a front runner during the last primary season. I don’t think there is any reason to think that has changed. I suspect that if she were running as an incumbent (or anointee) there would be an open field of challengers, and she would not prevail. So, I chose “Someone else”.

Now who would that be? Hard to say, it would be interesting to see candidates running from the more progressive side, as well as someone running from the right/middle trying to harvest GOP support. It would all likely end with a middle consensus candidate. Mayor Pete?

Meh. Biden ran three times for President and never won a single primary, but the fourth time was the charm. Past performance isn’t reliably predictive of future results.

Most Democrats preferred one of the other candidates, but I don’t think there’s any major group within the Party that actually dislikes Harris. I feel pretty sure that she would be able to cruise through a primary if she were already anointed as the choice of the party leadership.

We’re in a hyper-partisan era where probably 40% of the people are going to approve and 40% will disapprove of ANY President just based on partisanship, no matter how their actual performance in office is.

As I said in another thread, this is inaccurate and both-siderism.

If there was a good republican president, he would win crossover support from democrats. Democrats do not blindly approve of their own side and fall in line to defend anyone from their tribe no matter what in the same way that republicans do. Nor are they incapable of giving credit to someone on the other side who does something good.

Similarly, if there was an abysmal democratic president, say, 1/5th as bad as Trump, he would lose a lot of democratic support.

I agree that Democrats would abandon a President who was anywhere near as terrible as Trump.

As far as whether significant numbers of Democrats would support a “good Republican President”…I don’t think so, but there’s no way to know for sure. And it seems exceedingly unlikely that situation is going to come up in real life in the foreseeable future.

I think the only way Biden runs again is if Trump runs again. Biden won’t want to hand that off to someone who may not be able to take Trump.

I don’t think trump will run so Biden will step down and let some new blood have a shot. I don’t like Kamala and have voted against her in California repeatedly so I picked other mainly because in a contested field I don’t think she’ll have a chance.

If Biden takes a pass, and we don’t think that VP Harris is the heir-apparent, what about some of the names from 2020? Are they (Booker, Buttigieg, Warren) considered “past their shelf-life”?

For what it’s worth, I voted “Somebody Else” in the poll, but I have no idea either - it will be interesting to revisit this thread in a few years though.

Nixon peaked at 61% against no competition (i.e. George McGovern) in a rabidly antileft country. The universally popular Reagan, who attracted a group called Reagan Democrats, never even touched 60%. Eisenhower, the most popular man in the country by far, didn’t come close to 60% in his second term.

A Republican getting more than 60% would be less likely than a meteor wiping out Washington and not affecting Virginia. A good Republican, under any definition that would fit your post, being nominated for the office would be even less likely than that.

Most Democrats preferred one of the other candidates, but I don’t think there’s any major group within the Party that actually dislikes Harris.

There were (and probably are) a fair number of progressives that disliked her law enforcement/prosecutorial background and her track record relating to it.

I didn’t verify their sources or methodology here, but United States presidential approval rating - Wikipedia says that Reagan peaked at 74, Eisenhower at 81, GHW Bush at 89, GWB at 90, and Nixon at a fairly low 66. Are you using different numbers than the wikipedia list?

You did say Eisenhower didn’t hit 60 in his second term but that’s kind of making a specific claim to manipulate your point. Eisenhower did reach 81 approval even if he did not maintain it, which is consistent with my idea that Republicans are not capped at around 60% the way that their behavior caps democrats above 60% (in the current environment). You didn’t mention the Bushes, more recent examples, were even higher. Now - GWB’s approval rating was more about rallying around the flag after 9/11, I get that, but what if a 9/11 type event happened under Obama? You think we see that 90% like GWB got? I would be shocked if it hit 65.

I think politics were significantly different even 30 years ago, so I think the older examples are irrelevant to my point in our current environment. Trump/Obama/GWB/Biden are enough to demonstrate my point and existed within the current batshit political environment.

I was referring to actual percentages of the popular vote. I misinterpreted your meaning of approval. But votes are the only numbers that count. Historically Thing.Fish’s comment is correct in terms of votes, which is what I assumed you were commenting on. That’s why people always talked about reaching the swingable 20% in the middle. There isn’t terribly good evidence that they have gone away even now. There are 20% of voters who are independent, disaffected, disinterested, or otherwise not caring about the election until the day it happens. Actual approval ratings in polls have never translated into voting percentages since about Washington.

And my statements of a good Republican not being even a possible presidential candidate still hold. I consider it meaningless to speculate what would happen if pigs could fly.

I voted for Biden, but man oh man when he slowly bowed his head at the podium when answering press questions about Afghanistan, he did not look very Presidential. 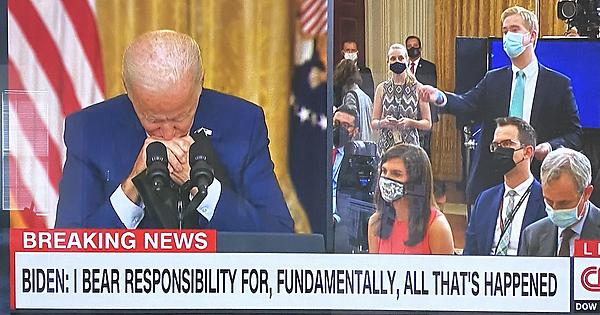 Bumping this because of new poll. It seems that the public at large doesn’t want a rematch of Biden and Trump. Thank Og. Link to Fox poll.