We’ve been deprived of examples of Mr. Trump’s free verse because they no longer issues transcripts of his statements, and he’s been banned from Social media. You really can’t count the written communiques – they don’t embody his spontaneity and his soul. You really need the words that fall from his lips.

Well, first of all,
the mandate is really hurting our country. *
Now that’s advice to an administration more so than to the Americans. *
A lot of Americans aren’t standing for it, *
and it’s hurting our country. *
It’s hurting our economy very badly. *
And being very *
– the proud person that did so well *
with therapeutics and, *
and vaccines *
and everything else *
and getting them done in record times, *
you know, *
I – *
I have a lot to say on the subject.
And one of the things I say *
*is they have to start promoting *
*and making the therapeutics more available, *
*because we have great therapeutics, too, *
in addition to the vaccines.
But the therapeutics –
*The vaccines, *
*I recommend taking them, *
*but I think that has to be an individual choice. *
*I mean, *
*it’s got to be individual, *
*but I recommend taking them. *
*Many people recommend them. *
*And if some people don’t want, *
*they shouldn’t have to take them. *
*They can’t be mandated, *
*as the expression goes. *
*And I think that’s very important. *
*Personally, *
*I feel very comfortable having taken them. *
I’ve had absolutely no reverberation.

[Will the pandemic continue?]

This was a corrupt election.

[Why did Republican officials in Arizona accept the results, then?]

*And, *
*just so you know, *
*some of those people went before Congress a short while ago, *
*and they were grilled by Congressman Biggs. *
*You ought to take a look at their testimony. *
*They weren’t able to answer anything. *
*He made them look like fools. *
*They couldn’t answer a thing. *
*They got up and gave a beautiful statement. *
*And then when it came time to ask, *
*why this? *
*Why that? *
*What about these votes? *
*What about those votes? *

[But your own lawyers found no evidence of fraud]

*Look at Pennsylvania. *
*Look at Philadelphia. *
*Is it true that there were far more votes *
than there were voters?

[Why aren’t most of the Republicans in Congress standing behind you?]

[They said there was no standing for the case]

Greatest line in that whole interview, when he was griping about how Biden could get 80 million votes.
Inskeep: “If you’ll forgive me, maybe because the election was about you.”

[But your own lawyers found no evidence of fraud]

You betcha, Donnie. Let’s wait until 2120 before starting to look.

What expression? “You can lead a horse to water, but he can’t be mandated to drink”?

Very artistic, but his trochaic pentameter needs some shoring up.

This stanza jumped out at me:

(ETA: Did they say “Sir, you don’t have standing” with tears in their eyes?)

And to invoke the name of Andy Fucking Biggs. trump’s No. One toady and boot licker.

Hey Andy Pander, remember - he’ll turn on you some day, too.

Perhaps this masterpiece could get a sequel with those poems? 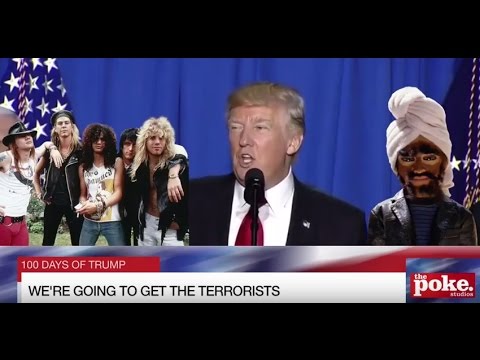 What expression? “You can lead a horse to water, but he can’t be mandated to drink”?

I think it’s from Billy Joel –

“She can’t be mandated
She has her degree…”

I’ve had absolutely no reverberation.

This is definitely the best line.

*and I can’t testify because it’s been through a lot of systems, *
*a lot of different systems. *

Wait one minute, here. It’s been through a lot of different systems? Why has no one brought this up before?! That seals it. The election was stolen.

Can someone please get that guy an Adderall or two? Word salad non-sequitur diarrhea. People actually voted for that imbecile!

Well, that’s the way they talk, too.

He hung up on Steve Inskeep. He couldn’t handle an interview with Steve Inskeep. Trump is a weak, weak, flabby little child of a man. Naturally, he’s a Republican hero.

One fantasizes about Eric Sevareid or Edward R. Murrow interviewing him…

There’s lots of reverberation in an empty room