Thinking outside of the box - Trump 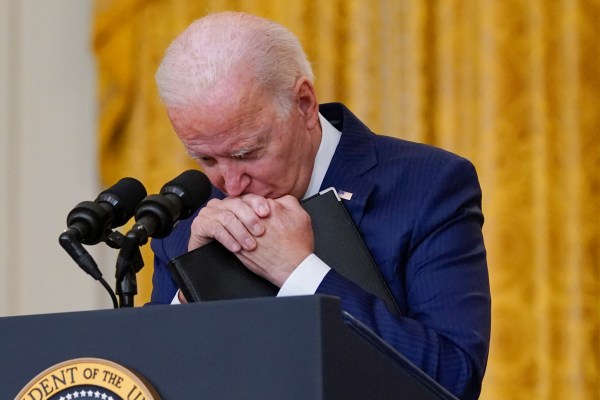 President Biden should be praying for better polling days ahead. Only 44% of voters surveyed approve of his job performance, according to an ABC News/Washington Post poll out Friday.

The implication is that in order to think outside of the box, one should not try to figure out why Trump is in the news again but why Biden’s admin is falling apart.

I don’t think it’s related. And it is six weeks old, an eternity in politiccs. Did you save it so long just for this ocasion? What a nice and pacient person you must be.

Start his own religion/cult. All his worshippers can still give him money and call him messiah or Yahweh or whatever suites his fancy. Plenty of ego stroking but kept contained to a compound somewhere in FLA or TX.

Give him a reality show and tell him the ratings are better than any show ever.

I keep saying that we wouldn’t be in this mess if his stupid show wasn’t canceled.

This is a thread discussing Trump, not Biden. If you would like to start a thread about Biden’s approval rating, feel free to do so.

Modnote: Not really related. Start your own thread if you wish to discuss this.

@Icarus, while it is your thread, please flag offending posts and don’t Jr. Mod.

He should open a Branson-style theater at Mara-Lago. Every day would be a life affirming rally, and the museum/ gift shop/ presidential library would be a gold mine.

I keep saying that we wouldn’t be in this mess if his stupid show wasn’t canceled.

I would settle for giving him another season of The Apprentice while the DOJ investigated and prepared to charge, try and convict him.

He will be told that opening the door will expose them to radiation exposure in minutes.

Although I like the general idea, remember that this is the guy who made it a point to look at a solar eclipse without glasses. He won’t believe in radiation, it’s something he can’t see and only scientists and doctors can tell him it’s dangerous.

(Hmm, a bunker at Yucca Mountain ?)

Modnote: and on that post you are now banned from this thread and I’m hiding your post.

Anything more will be at least a warning

There are a few things with monarchies.

The first is they are heavily dependent on the personality of the monarch in question. QEII works because she is a deeply sensible person who AFAICT believes wholeheartedly in doing nothing more than acting as the Wise Person in the background while leaving the rest to democracy. QEII has never at any time shown even the tiniest inclination to overstep the mark.

Does Trump pass this test? Ahahahaha, good one! Very funny.

The next thing (which is arguably just a corollary of the first thing) is whether the monarch is - if not very able or interested themselves - at least able to surround themselves with sound people who can’t or won’t manipulate the monarch, will be able to talk sense into the monarch if they want to do something stupid etc.

The last thing is that monarchs have a way of acting as focal points or figureheads for idiot mobs, even if the monarch doesn’t really want to be. The monarch needs to be able to defuse and calm down such situations, and make it clear they don’t want adverse things done in their name.

I’ve thought about the Twitter thing, too. But, I think that, to really sell it, they’d also need some fake TV news to be constantly freaking out over what he said. No need to use real newspeople, since he’d probably not notice. But, if any wanted to have some fun, they could always swap in.

The only thing left then would be faking the rallies.

To me, this is all handled in the structural aspects of a constitutional monarchy. We are most cognizant of the UK, but there are a number of other European countries with similar structures. The deal for Trump would be similar - “You get to be King, under these conditions. If you stray, then out you go.”

Who is the speaker in your dialogue? There is no incorruptible, all powerful and wise actor who can be relied upon to make a monarch go when they stray. Indeed history shows that once a monarch gets established, it can take nothing short of violent overthrow to get them to go, and very often doing so only results in installation of a new and often worse monarch.

When you set someone up with the trappings of power, you cannot be sure they won’t use those trappings to get real power. Particularly as there are many among us who are fooled by trappings and who will happily grant power and give support to those they perceive as having power.

The US people elected a failed huckster as POTUS because he played a successful man on TV. Make him King and there would be every chance that those same people would before long mean you were no longer able to make him go if he strayed, or not without actual violence.

Who is the speaker in your dialogue? There is no incorruptible, all powerful and wise actor who can be relied upon to make a monarch go when they stray. Indeed history shows that once a monarch gets established, it can take nothing short of violent overthrow to get them to go, and very often doing so only results in installation of a new and often worse monarch.

Thinking of the Duke of Windsor scenario. There was no violent overthrow, nor worse monarch installed.

I would think that just some sort of surreptitious hypnosis (SEAL Team 6 exfils him from Mar-A-Lago, and the CIA renders him to a black site), where he were convinced – down to his core – that he actually is a decent person, and that his parents were proud of him and did love him would solve a whole lot of this.

A bit of male enhancement surgery, while he was under, would probably help, too.

If you want to get rid of Trump just release a bunch of doctored, fake videos of him talking about how America should welcome latino and muslim immigrants with open arms, how BLM is about fighting against historical injustices, how the police are far too abusive towards minorities, how feminism is the wave of the future, how christianity is an outdated belief system.

Then release these videos all over. Yeah many of his cult followers will say its fake news, but it’ll create divisions among these people because they only worship him because he is an open and proud white supremacist. If they think Trump has abandoned identity politics in favor of egalitarianism, his base will turn on him.

Firstly as my first post should have made clear, I’m not saying constitutional monarchies never work - clearly they do. But they take the right people and the right history and the right culture.