I’ve sorta fallen into a side gig: breeding a species of rodents called multimammates, or African soft-furred rats, which are prized as food for ball pythons in particular and throughout the reptile & exotic pet world in general. I do this primarily to feed my own snake, Pretzel, but since I’ve only got one mouth to feed, the nature of how rodents breed means I’ve always got extras. They’re not commonly available yet, so a quick Craigslist or Facebook ad has always generated interest from locals. In fact the 1st time I did that I coulda sold my entire population three times over within an hour. (I have since raised my prices.)

I’m not getting into this with the idea of generating buttloads of income, nor do I harbor illusions that one gets rich easily or quickly - or at all, usually - by breeding animals as a general rule. But if I’m gonna sell 'em anyway, I might as well do it with style.

Which is where I turn to the smartest people I know, to help me come up with business names. I don’t want to go super-cutesy, so no “Krazy Kritter Korner” stuff… but it would be fun to have a catchy name and perhaps, that would help people remember me.

Ideas? Suggestions? My IRL name starts with an “m” so alliteration with multimammates is logical… but it seems more people are familiar with the African soft-furred name, and often just call 'em ASFs and get it over with.

(Pic is from this evening, with a juvenile who’s juuuuust opening his eyes, under the stern watch of a protective momma rat.) 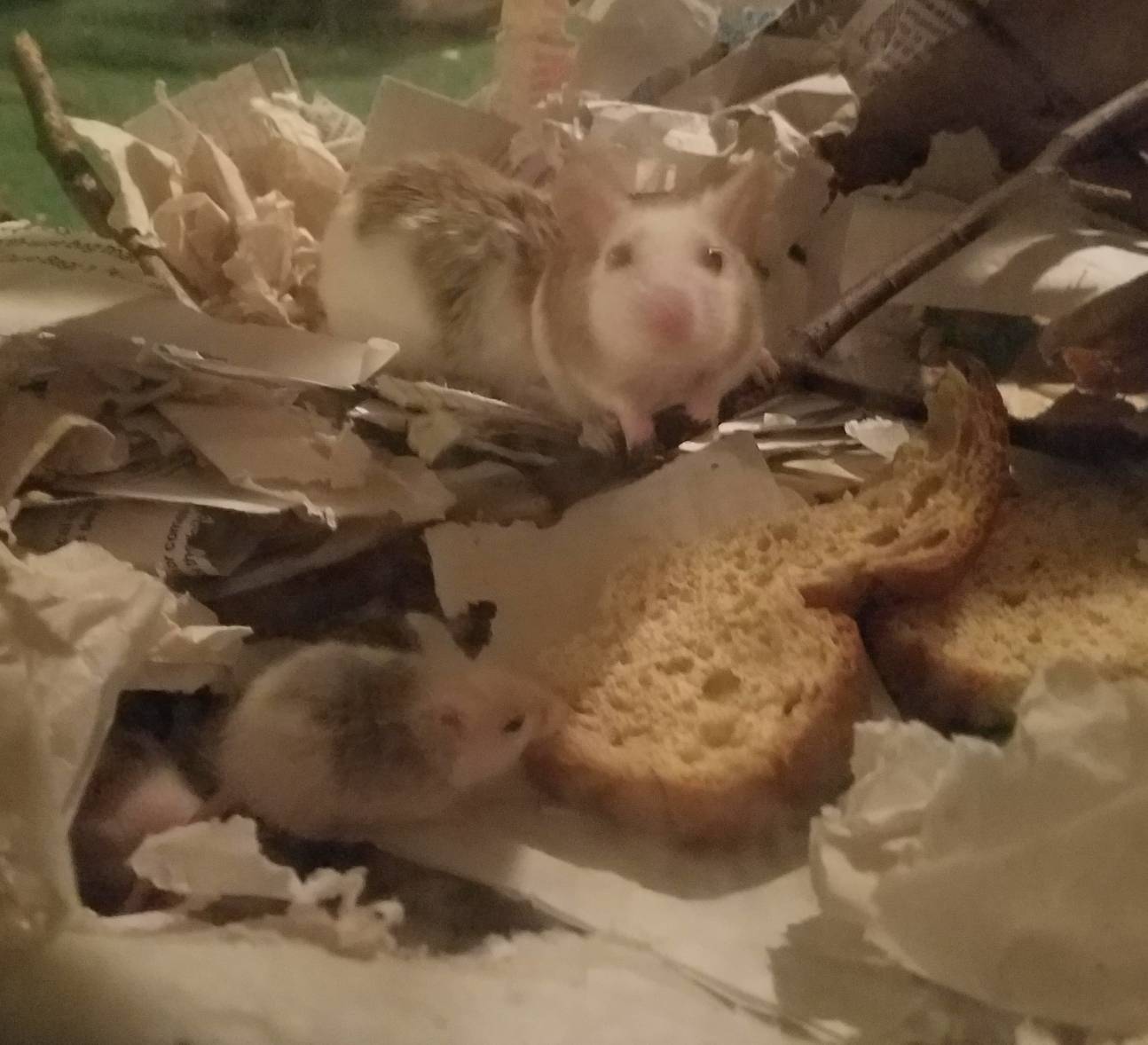 I assume Rat-atouille has already been taken, or could bring you some legal heat from the Pixar folks.

Why is this particular breed so prized as food, and for ball pythons in particular; fussy eaters are they?

Yeah, ball pythons are notorious for going on inexplicable hunger strikes, worrying their owners, and many of them are extremely fussy about quirky personal requirements for their lunch.

This little species of rodent is native to the same parts of Africa as ball pythons … unlike standard regular rats (which are domesticated from Norway rats) and seem to smell unfamiliar and not-food to many ball pythons.

A related benefit is that ASFs are always the right size … regular rats get HUGE and males especially can outgrow all but the very largest ball pythons.

Anyone who’s had mice or rats is familiar with the funk, esp. from boys. Nice thing about ASFs is there’s almost no odor at all. On the flip side they are not domesticated like regular rats, so they lack the friendly curiosity towards humans that most rats show … these are very prone to bite or run away instead. Not friendly in the least.

Well, okay, that makes it okay to throw them to the snakes then.

I was thinking more along the lines of

But I have a feeling all of those violate the cutesy clause.

I do have a suggestion though for a possible tag-line of sorts ------- “feed your possibly invasive species with ours”.

(I looked at the pic ----- they really are awfully cute as rodents go. I would go Name’s-ASF personally since MASF could make a cool base for a logo if it ever gets to that stage/size. But don’t rule out cutesy – it worked well for Frog Hair Fishing Line and a lot of other businesses.)

What is your snake’s name? Would s/he make a good mascot?

Things To Be Swallowed By A Boa Constrictor

Heh, Python Kibble. Now that’s funny! I laughed at the “feed your invasive species with ours” tagline, too.

(Because Dope pedantry: To my knowledge, ball pythons aren’t anybody’s idea of an ecological threat … but I am aware of what damage reticulated and Burmese pythons a.k.a. retics and berms, are doing to the Everglades. On the rodent side, ASFs are big grain eaters, making them agricultural problems in their native areas & prompting California to ban them entirely. I get jealous comments from Calif residents on FB all the time, in the rodent breeder groups I joined.)

I like Pretzel’s Choice. I could see designing a label like old-school dog food bags with it.

Keep 'em coming, folks. This is fun! (And motivating. It’s pretty easy to naysay myself, and think, “Nahhhh. What kind of idiot thought this was a good idea?”)

I’m voting for “Viper Victuals”, as listed by TruCelt above. It’s brief and conveys what the business is about with just the right touch of cleverness.

Are you just doing this locally or will you be shipping them? If it’s just local, name it something like:

That’s what people will be google searching for. Although you may be using them for python food, that might not be true for everyone. If you were breeding all kinds of rodents for pythons, then maybe make the name be more python specific. But if you’re just breeding this one kind of rat, you don’t need to limit your market by saying it’s just for pythons.

I don’t think you can go wrong with the above Python Chow, unless there is a copyright problem.

Or the Snake Snack Shack.

I don’t know about purple but I love it!!! I can hear the song already