What scenes do you alone seem to remember?

I’m pretty sure no one watched The John Laroquette Show but me. Yet on it, one of the funniest moments in sitcom history occurred:

Bum: Can I have a dollar?
Shopkeep: Man, last time I gave you a dollar, you called me from that pay phone four times.
Bum: Everybody says they love irony, but nobody wants to pay for it.

It’s tattooed into my brain. No one else in the universe remembers seeing it, that I’ve found so far. Your turn.

Also from the John Laroquett show: his female friend is late for lunch. Her excuse is, “I had to go home and feed the fish.” His response: “Is that what the kids are calling it these days?”

I seem to remember the Nazi-soldier-WWII-save-Rachel scene from Highlander the first time I saw it in theaters, but not again until the latest DVD release.

I’ve since been told it never played in the states with that scene.

In Babe, Pig in the City, when Mrs. Hoggett is invited into the private room to be searched by customs, the woman officer snapped a rubber glove on her hand. I saw this in the theater; that last shot is missing from subsequent video releases.

I remember something from the trailer for “Who Framed Roger Rabbit” that I never saw in the actual movie – a brief scene of a guy with a pig’s head looking in a mirror and saying “I’m a pig!”

One from the mid 1970s: I definitely remember watching television and seeing an episode of The Flintstones in which Fred, Wilma et al went on a trip by plane somewhere. The plane was a pterodactyl-like bird and they sat outside on its wings. And I distinctly recall seeing QANTAS written on the side of the plane. I was only about ten at the time but even so I thought that was weird. I’ve never found anyone else who has seen this episode.

I’ve never met anyone who remembers what I do about the ending of the theatrical release of Apocalypse Now!.

As a backdrop to the end credits there were many huge, colorful, and sort of beautiful, firework-like explosions in and around the temple complex–presumably from the air-strike that was called in by the guy that got beheaded (before said beheading, of course).

I’ve never seen those scenes again in all the broadcast, cable, tape and DVD versions.

I also clearly remember a scene that didn’t really fit into the film at all showing the riverbank covered with flowers for a stretch. This has been missing from all subsequent viewings, but there is some comment by one of the characters about some place like that back in the States.

I’ve never met anyone who remembers what I do about the ending of the theatrical release of Apocalypse Now!.

As a backdrop to the end credits there were many huge, colorful, and sort of beautiful, firework-like explosions in and around the temple complex–presumably from the air-strike that was called in by the guy that got beheaded (before said beheading, of course).

I’ve never seen those scenes again in all the broadcast, cable, tape and DVD versions. …

The original 1979 70mm theatrical release ended with Willard’s boat, the stone statue, then fade to black with no credits. Later, when it was no longer practical to have no credits, Coppola elected to show the credits superimposed over shots of Kurtz’s base exploding (anamorphic 16mm rental prints circulated with this ending, and can be found in the hands of a few collectors). However, when Coppola heard that audiences interpreted this as an air strike called by Willard, Coppola pulled the film from its 35mm run, and put credits on a black screen. In the DVD commentary, Coppola explains that the images of explosions had not been intended to be part of the story; they were intended to be seen as completely separate from the film. He had added them to the credits because he had captured the footage during the demolition of the set in the Philippines, which was filmed with multiple cameras fitted with different film stocks and lenses to capture the explosions at different speeds.

Because of the confusion over the misinterpreted ending, there are multiple slightly varying versions of the ending credits. Some TV screenings maintain the explosion footage at the end, others do not, and there are several other versions.

… I also clearly remember a scene that didn’t really fit into the film at all showing the riverbank covered with flowers for a stretch. This has been missing from all subsequent viewings, but there is some comment by one of the characters about some place like that back in the States.

Sounds like the scene where Chef goes looking for mangoes and finds a tiger instead?

Though evidence does indeed show that a variation of this happened, we still have no evidence that the tape was ever aired.

LinkSounds like the scene where Chef goes looking for mangoes and finds a tiger instead?

More likely, the first time you saw the film, you created a picture in your mind when Kurtz described the gardenias he saw once when floating down the Ohio River, and your brain tricked you into remembering it as an actual filmed sequence.

The popsicle eating twins on The Gong Show. That only aired once, but nobody who saw it will ever forget it! :o

I remember something from the trailer for “Who Framed Roger Rabbit” that I never saw in the actual movie – a brief scene of a guy with a pig’s head looking in a mirror and saying “I’m a pig!”

They filmed a scene where the Weasels get Eddie Valiant and put an animated pig’s head on him. He rushes back to his office and into the bathroom, where he sees the head in his mirror, as you recall. He then steps into the shower and washes it off. it melts down the drain, the eyes “popping” as they go through the drain hole. Then Jessica walks into the office calling “Mister Valiant”, and he steps out of the bathroom, partly dressed.

it was cut before the film was released. Wheh Jessica enters you hear a newly-added toilet flushing to explain why Eddie is coming out of the bathroom. AFAIK the scene was never shown in theaters, but it appeared in some movie magazines, and they did run it on TV a couple of times as a sort of “expanded edition”. you can see it as a special feature on the DVD release.

here’s one I have never seen, but at least two people I’ve talked to have – it’s from Young Frankenstein, where they’re presenting “the monster” at the theater. Before they go on, Gene Wilder/frankenstein goes up to Marty Feldman/Igor and pats him on the back:

Frankenstein: (surprised) What happened to your hump?

Igor: NEVER with a tux!
And when Igor and Inga rush up on stage to Frankenstein after the Monster has gone on his rampage, you can clearly see that Igor, for the only time in the movie, sports no hump. THAT scene is still in the as-released picture, which convinces me (as if the word of others wasn’t sufficient) that the deleted scene must have existed. But I’ve never seen it. To my chagrin, it is not among the “deleted scenes” on the DVD. Why not? It can’t be because Mel Brooks thought it was in Bad Taste.

I’m just darned sure that when I saw Logan’s Run in the theater, at the end–when the buildings are exploding because the computer has a problem :)–the computer voice is saying “Remain calm! The Computer is your friend!” But no one on the boards here has seen such a scene, and I rented the DVD and it doesn’t have that happening. It’s probably my early-onset senility making a fuss.

I remember a scene that I have been unable to locate again to prove that my memory isn’t haywire. To begin with, it’s not in any of these possible places:

The bit involves a ventriloquist who has a strange relationship with his dummy (all cited examples do, too).

But in this one the punch to the bit is that the dummy is actually the ventriloquist.

During Letterman’s recent ventriloquist week, there was a guy who did part of his bit in the persona of the dummy. He must have seen whatever it was that I did. My best guess is 1960’s or 70’s, although it could be a decade earlier or later. Not later than 1989, though. That’s when I saw Dead of Night again for the first time since the 50’s, thoroughly convinced it would be the one. It wasn’t.

For some reason, I remember a scene in Raiders of the Lost Ark…something about Indiana having an affair (or at least a fling) with a student. Brody is confronting Jones about it when they reach his house and find it ransacked.

I don’t know why I remember that, because every time I’ve seen the movie it isn’t it there. I must have imagined it, but how odd.

But in this one the punch to the bit is that the dummy is actually the ventriloquist.

This has actually been done on 1950s TV two or three times. One that has been in syndication is from Alfred Hitchcock Presents, the episode called The Glass Eye (with the famous Billy Barty playing the “dummy”/ ventriloquist: 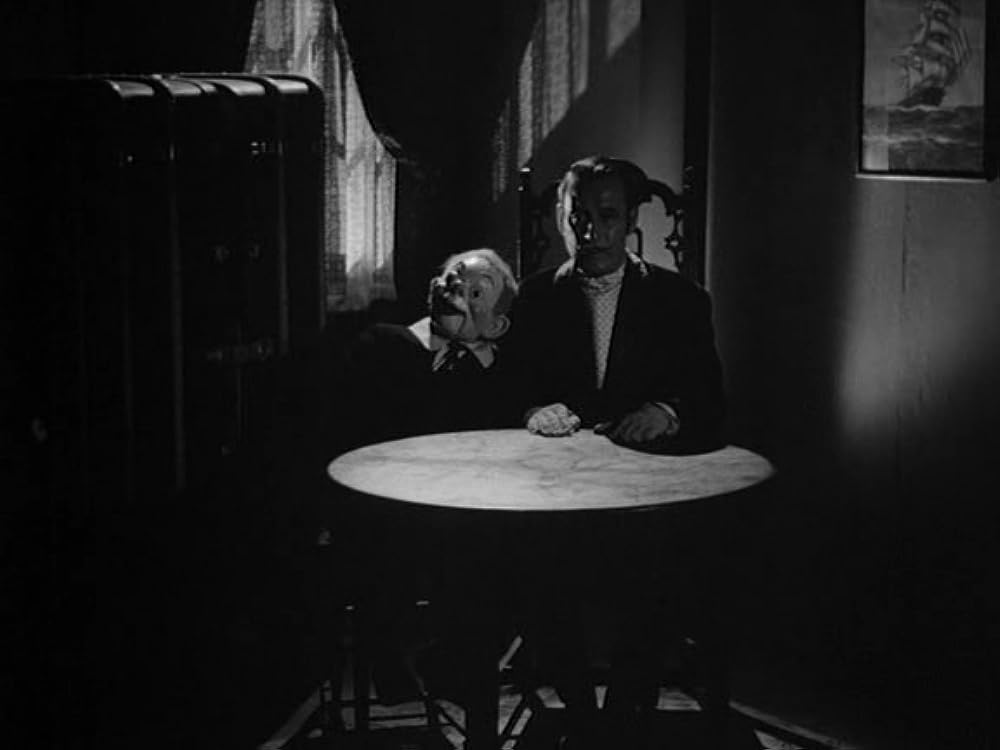 The Glass Eye: Directed by Robert Stevens. With Alfred Hitchcock, Jessica Tandy, Tom Conway, Rosemary Harris. Captivated by the actor's physical beauty, an aging spinster pulls up stakes to follow a ventriloquist and his dummy from performance to...

I don’t know if this fits the definition in the OP, but back in the 70’s on the Carol Burnett Show, there was a sketch that I thought was the funniest thing I’d ever seen on the show, but it has never made it onto any of their recap specials or Best Of…shows. I remember I was sitting in the kitchen with my dad watching it, and I was sitting on the floor, and started laughing so hard that I fell over…so I was literally Rolling on the Floor Laughing.

The scene had Tim Conway and Harvey Korman as British officers of equal rank stationed together alone on a remote island during WWII. A supply plane drops off the mail, and Harvey has been promoted. He instantly becomes a total martinet, pulling rank on his friend and ordering him about. He orders Conway to “Parade the troops!” which puzzles Conway because he’s the only other person on the island, but he gamely tries, marching past the bamboo “reviewing stand” and then dashing madly around behind to parade past again, over and over. I don’t remember how the skit ended…I think perhaps another mail plane goes by and Conway gets promoted, but I’m not sure, because I was laughing so hard.

Nobody I have described this to remembers that sketch, and the rest of my family was watching something else in the living room, and my dad died a few years later, so I can’t confirm that it every appeared…but I remember it so well. I wish they would use it on the next Reunion special.