What to do with gnocchi

I’ve never made gnocchi. I recently had some in a soup that was pretty tasty. Any suggestions on what to do with the package I just purchased on a whim?
Thanks!

My favorite thing to do with them is just fry them in a pan with butter until they are a little crispy. I chop up some kale real fine and add it in, then mix it up until the kale is cooked (it will take less than a minute).

Gnocchi alla Panna. Boil and drain gnocchi, top with lightly sauteed vegetables and a cream sauce. For the sauce just warm cream and stir in some parmesan and reduce. Mushrooms, scallions, and peas make good additions. Sometimes I top it with some julienned strips of ham or thinly sliced prosciutto.

You can find gnocchi goulash recipes that are wonderful. Some of the recipes have potatoes in the goulash and I’m not a fan of the double starch. I just like the stringy fall apart beef with the really flavorful dark sauce.

Anything you would do with conventional pasta, like gnocchi and cheese instead of macaroni and cheese.

4 cheeses ghocchi: make a sauce mixing 4 cheeses that you like, boil gnocchi in salty water (put gnocchi into the water when it boils, not before!!) and then add them to the sauce. Easy and super yummy!
Gnocchi alla sorrentina: prepare a simple tomato sauce, buy a sauce, put in a bowl with same salt, origano, a little water snd cook for 10 minutes, boil Gnocchi as described above, then put Gnocchi in a small bowl. Take a mozzarella (or similar cheese), cut ut into small pieces and use it as a topping for the Gnocchi (already mixed with the tomato sauce and cook in oven for 5 minutes (NOTE: the upper part of the oven must be on, until the mozzarella melts and a cruncy, light brown crust appears. Wait a few before eating because it will be as hot as hell. You will like it! Let me know!

Thanks for the ideas! I’ll probably start with an easy one and if it’s as good as I think it will be I’ll keep rolling with the gnocchi goodness!

I make a very thick pumpkin soup. If we happen to have a little of that left over, it becomes a sauce for gnocchi, with a little grated parmesan over the top.

These are staple recipes in our house. For the chicken recipe, we just use regular gnocchi instead of the mushroom version.

Fresh mushroom gnocchi is paired with sauteed baby bella mushrooms and chicken in a creamy Marsala wine sauce, which is sure to please everyone in your family. 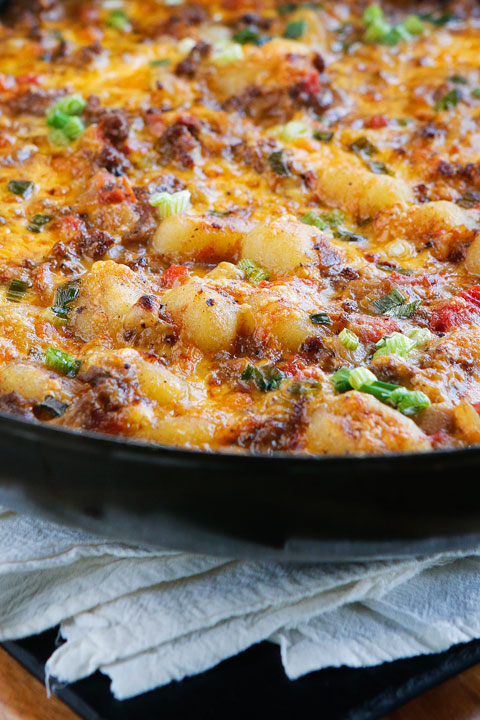 How to make gnocchi in 15 minutes with this Cheeseburger Gnocchi recipe. Gnocchi simmered in seasoned beef, spicy tomatoes, and topped with melty cheese.

Gnocchi with brown butter and sage is a classic and delicious Italian use for gnocchi. (Steps 3 and 5 are the pertinent ones if you already have gnocchi)

My wife makes a mean gnocchi and Brussels Sprouts dish - just had it the other day.

This is delicious - gnocchi with pumpkin and sausage. I think I used unseasoned tomatoes instead of fire roasted, out of preference. Recipe Details | Publix Super Markets