What's so terrifying about the Daleks?

Growing up on American TV, my exposure to Dr. Who villains was very limited, but I vaguely remember an episode of the Six Million Dollar Man that involved a Dalek chasing him through the forest. I think Bigfoot might have been part of the plot too, but I was very young and it was a long time ago.

I was old enough to understand the Dalek was merciless, virtually indestructible and had very impressive weaponry, but it was alone against Steve Austin, astronaut. I remember thinking “OK, it’s like a super tank, but with no ground clearance or buddies to back it up but Steve is scared of it, so it must be pretty bad”. I didn’t know about its reputation across the pond.

Can anyone enlighten me on the true horror of the Daleks? Are they overrated? How many and how long would it take them to conquer the world? How do they stack up against the Borg?

Er. I think you may be misremembering. Daleks have never fought Steve Austin.

Daleks were on the Six million Dollar Man?

I so want to see that episode now!

I grew up on Dr Who from seeing the first episode at the age of five (thanks big bro for insisting we watch it) and I’ve no idea. The power of the Daleks defies explanation. They shouldn’t work, they’re animated dustbins knocked up on a tiny budget by BBC special effects for black and white telly. They can’t climb stairs. One of their fearsome weapons is a plunger fer gods sake! But work they do. Going back to childhood memories it was the voice that made it, that flat harsh intonation, and in particular the war cry of “Exterminate!” In the early days too there was mystery – just what was inside a dalek, where did they come from? And I think they were/are the perfect foe for the Doctor who is, above all compassionate. If he works then so do they.

I so want to see that episode now!

Even without Daleks I thought the Bigfoot episode (a two-parter!) was about the greatest thing ever made. Andre the Giant as Bigfoot, how can it miss?

I think you are remembering this episode of TSMDM. 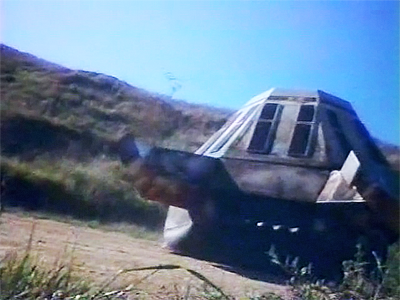 A Soviet launch of a probe to Venus malfunctions, bringing the probe down in the United States. Because it is made of a new alloy, unknown to American technology, Soviet scientists and agents are anxious to recover the probe, which has landed in a...

Yep, that’s the epidode. Funny, in my mind’s eye I could clearly see a Dalek fighting Steve Austin, but the proof is right there in the photo. :smack:

“Tonight on Star Trek, a special appearance by Darth Vader”.

Death Probe vs Dalek would just be like a crap version of Robot Wars!

The power of the Daleks defies explanation. They shouldn’t work, they’re animated dustbins knocked up on a tiny budget by BBC special effects for black and white telly. They can’t climb stairs.

I think you are remembering this episode of TSMDM.

Or possibly “Return of Death Probe” which had a new and improved black version, given that that’s the typical Dalek color. Plus, the original version was just out of control; the later version was a purpose built fighting machine.

Daleks can now levitate, solving the problem of stairs.

Having watched Dr. Who from the start

, largely cowering behind the sofa for safety :eek:, I can tell you that the early monsters were usually just men in rubber costumes.
What pleasurably scared a generation of kids was:

I remember being terrified when the camera simply showed an empty doorway and the music swelled to a crescendo = ‘something is coming!’

Daleks are now a happy reminder of my childhood, although I would add that they are merciless and efficient killing machines. You simply can’t appeal to a Dalek’s better nature. :smack:

Daleks as a concept are kind of like the Terminator: they’re unstoppable robotic marauders with awesome power (that you never see due to budget constraints

) and a desire to hunt down everything that lives in order to watch it burn. One of the earliest serials with them (we’re talking first Doctor here) had the TARDIS being chased all over space and time by them because the Daleks finally got a time machine and their master plan was:

So yeah, visually they’re not much but they played up the “They hate you, cannot be stopped, and are coming for you!” angle in the series.

These days it seems like they can be stopped by a boy scout troop. They really need to rest for a bit, get a couple of “wins” under their belt, and rebuild their berserker war machine status again.

The Daleks in the current Doctor Who stories can fly, as mentioned above, and their backstory has been pretty well fleshed out now. So they do seem a bit more scary than just garbage cans with scary voices now.

However, they have been awfully overused. I cringe now (and not from fear) every time they appear in a new episode. They are played out and I’d be glad to never see them again. The same goes for the Cybermen. Played out.

Dear Doctor Who writers,
You have all of time and space from which to create new villains. Please do not continue to feature Daleks or Cybermen (or Daleks and Cybermen) in every other story. It feels like watching the same episode over and over again. Be original!
Sincerely,
Tangent

P.S. Please make the Doctor’s next companion a scantily-clad warrior woman from another planet. Thanks

For some reason, I find the Daleks really cute. Maybe it’s those little bubble spheres all over their bodies, or the little proboscis they swing around to peer at things, or the mechanical voice that somehow sounds angry and plaintive at the same time. I want a baby Dalek.

Actually, they always could. They just didn’t do it on screen. It wasn’t until the Fourth Doctor (in Destiny of the Daleks in the 17th season) that is was actually established they couldn’t, and in Resurrection of the Daleks (Fifth Doctor, 21st Season) they established that they could levitate up stairs, which would mean that the Fourth Doctor was wrong.

Besides, real Daleks don’t climb stairs. They level the building.

Daleks are like the Borg and Species XYZ? from Voyager.

They are basically terrifying by definition. They are terrifying because even the biggest bad asses are terrified of em. They just automatically invoke the o shit response.

Its kind of like being a little kid whose Dad is their biggest hero and he aint fraid o nutin and he knows it, you know it, he knows you know it and he lets you know it.

So, you are out camping with ol Dad. All of sudden, Dad comes rushing back to the campsite, all outa breath and terrified, sceaming lets get the hell out here NOW son (and dad doesnt ever cuss!).

Thats all the detail you NEED to be scared shitless.

Any more detail or repeated exposure to said terrifying or unstoppable threat just diminishes the impact.

These days it seems like they can be stopped by a boy scout troop. They really need to rest for a bit, get a couple of “wins” under their belt, and rebuild their berserker war machine status again.

See, this is why we need a big-budget Hollywood spectacular Doctor Who movie, directed by Christopher Nolan, who’s managed to hit Batman out of the park and so is a good candidate.

Just as the Joker was revisited and turned into a really frightening, unsettling supervillian, so can the Daleks. I bet Nolan could put some Daleks on the screen that’d make you shit your pants. Climb stairs? That’ll be the last of your worries when those bad boys show up and start kicking five hundred different kinds of ass.

For candidates to play the good Doctor, I have always stood by Tim Roth, though speaking of Batman, Gary Oldman can play anything.

I’ve only ever watched nuWho, so take this with a pinch of salt, but it’s like billfish said, only, instead of your dad, it’s the Doctor who’s terrified - when he’s immediately scrambling at the door screaming to be let out in “Dalek”, that’s contagious.

When he then goes on about how ONE Dalek is going to kill everyone on the base, then everyone in Denver is dead? That’s pretty bad-ass for a plunger-equipped bin on wheels. Anything that can get the Doctor riled up enough that he literally is spitting mad? Cool!

Plus they just sound sooo insistent! “EXTERMINATE!OBEY!” They’re like every ALLCAPS asshole on the 'net given mutant flesh and a death ray.

Also, they have a wicked sense of humour - witness this Dalek-Cyberman interaction(paraphrased):
Cyberman: Cybermen…are…superior!
Dalek:CYBERMEN ARE SUPERIOR IN ONE WAY ONLY! YOU ARE BETTER AT DYING! ZAP

Also, they have a wicked sense of humour - witness this Dalek-Cyberman interaction(paraphrased):
Cyberman: Cybermen…are…superior!
Dalek:CYBERMEN ARE SUPERIOR IN ONE WAY ONLY! YOU ARE BETTER AT DYING! ZAP

It’s in my opinion the exchange just prior to this rare example of Dalek wit that acts as a bit of a defining moment; I can’t recall the exact wording, but in effect, the Cybermen ask the Daleks how many of them there are, and as they respond, truthfully, “FOUR!”, the Cybermen then ask them if they think they can defeat them with only four Daleks – and the Daleks see absolutely no problem with that. And what’s more, they’re right.
As to why this serves as a definition of their fearsomeness, think of it this way: the Cybermen are kind of like the Borg in how they exemplify an archetypical human fear – the fear of losing one’s identity, one’s self-definition. That’s a pretty strong fear in most people, even though often on some barely-realized level.
It’s not, however, even in the same league with the Daleks. They don’t represent any given fear so much as just, as billfish678 already said, being defined as being terrifying, and thus being a definition for terror. They’re axiomatically fearsome. They’re fear itself.