Just now I was putting on some fresh water in the coffee maker and noticed it was 12:34. After 11:11 that’s my favorite time.

My wife and I have an uncanny knack for noticing when it’s 11:11.

All that stuff you do with your clock sounds cool.

I like little things like that, people dedicating some time to do something just to do it.

My wife and I have an uncanny knack for noticing when it’s 11:11.

All that stuff you do with your clock sounds cool.

I like little things like that, people dedicating some time to do something just to do it.

Yeah, the “hey, it’s 11:11” is our mantra. Sometimes we don’t notice it has passed and will be all sad for 12 hours until we can redeem ourselves. I josh!

I’m sure I’ve seen this before, but I’ve forgotten what it means. It’s not where they set clocks for display is it? That’s more like 2:50, right?

^^^It’s something to do with weed. I’m never been a smoker, but my friends who did liked that number for some reason.

Especially lately, I’ve been noticing when it’s 9:21 (both am and pm). I was born on September 21st.

^^^It’s something to do with weed. I’m never been a smoker, but my friends who did liked that number for some reason.

Especially lately, I’ve been noticing when it’s 9:21 (both am and pm). I was born on September 21st.

If you think of the numbers as letters, you get DT (4-20) but that sounds more like an alcohol issue.

Have you ever pondered the wonder of 12 hours on a clock and 12 months in a year and 12 notes on a piano per octave? And, wonder of wonders, 12 eggs in a dozen!

I also oddly enough always look at my cell phone, computer clock, etc at 11:11 (AM and PM). It drives me nuts, since I am not the kind of person who constantly looks at the time - maybe 5 times a day. Anybody know why this is?

420 is the police code for marijuana violations of some kind. So Pot smokers celebrate 4:20 by smoking pot. At least that’s what I was always told, but the wiki mentins nothing of it.

I do the 11:11 thing, because it was something that just started happening all the time…I couldn’t help but notice.

Sort of weird. About 16 yrs ago, it got to where I could not look at a clock anywhere w/o seeing this mumber combo at least once a day. It actually started to freak me out a bit, since even when I wasn’t trying to or, over time, went out of my way NOT to, it still happened. In random ways such as falling asleep with my infant son in the living room, then waking and carrying him to bed and glancing at the clock (11:11) or waking, showering, eating, happening to see the clock on the microwave at exactly 11:11.
Or being out and seeing a bank sign at just this time. I mean, it was approaching Twilight Zone proportions.
(and then we moved into a new house on Nov. 11 and I couldn’t sleep all night, freaking out over it being some premonition of disaster! Turns out nothing happened, but yeah, it freaked me out and I wondered)

I later mentioned this to a friend and he said, “Oh, there’s a book about that.” I said, “What? A book about my experience?” He said, “No, a BOOK, called 11:11, just like you see it on a digital clock.”
I located the book and looked through it (didn’t buy it)…turns out there is a worldwide cult built around this 11:11 stuff…they believe it is a pre-programmed signal to those of us descended from aliens FROM said aliens that it is time to ascend beyond this plane. If we miss it, we will be stuck in another very long cycle of earthly evolution. Guess I missed it (or continue to:D) S’ok…I still have shit to do here.

Still does from time to time, not just on clocks but receipts now and then ($11.11), etc. If I notice it now, I take a moment to pause and give thanks and send prayers/wishes out. Why not? Good a time as any.

Blues reference: Anybody out there know the song “21 Minutes to Nine” by Willie Love & His Three Aces … a piano player who recorded for the wonderful Lillian McMurray, on her Trumpet label in the 1950’s.

Killer tune to make love to!

Okay, people, I have one of those fuzzy memory things going. There’s a movie with a title of some clock time I can’t remember. Let’s just say 11:39 since I don’t believe it was 11:11.

It’s a lot like Rashomon in that it gets different viewpoints of what’s going on before and after that time at night from several different scenarios.

There’s a wreck. There’s a robbery of a Stop-and-Rob. There’s a section where a kid’s dick gets cut off and lost on the roadway. A guy goes after his missing daughter. And there’s something in a graveyard.

At least two name actors, but I can’t remember who.

Anybody have a clue what I’m talking about?

Found it by way of a keyword search on “severed penis.” It’s 11:14 (2003) and the “name actors” include Barbara Hershey, Hilary Swank, Patrick Swayze and Henry Thomas. Cool flick! 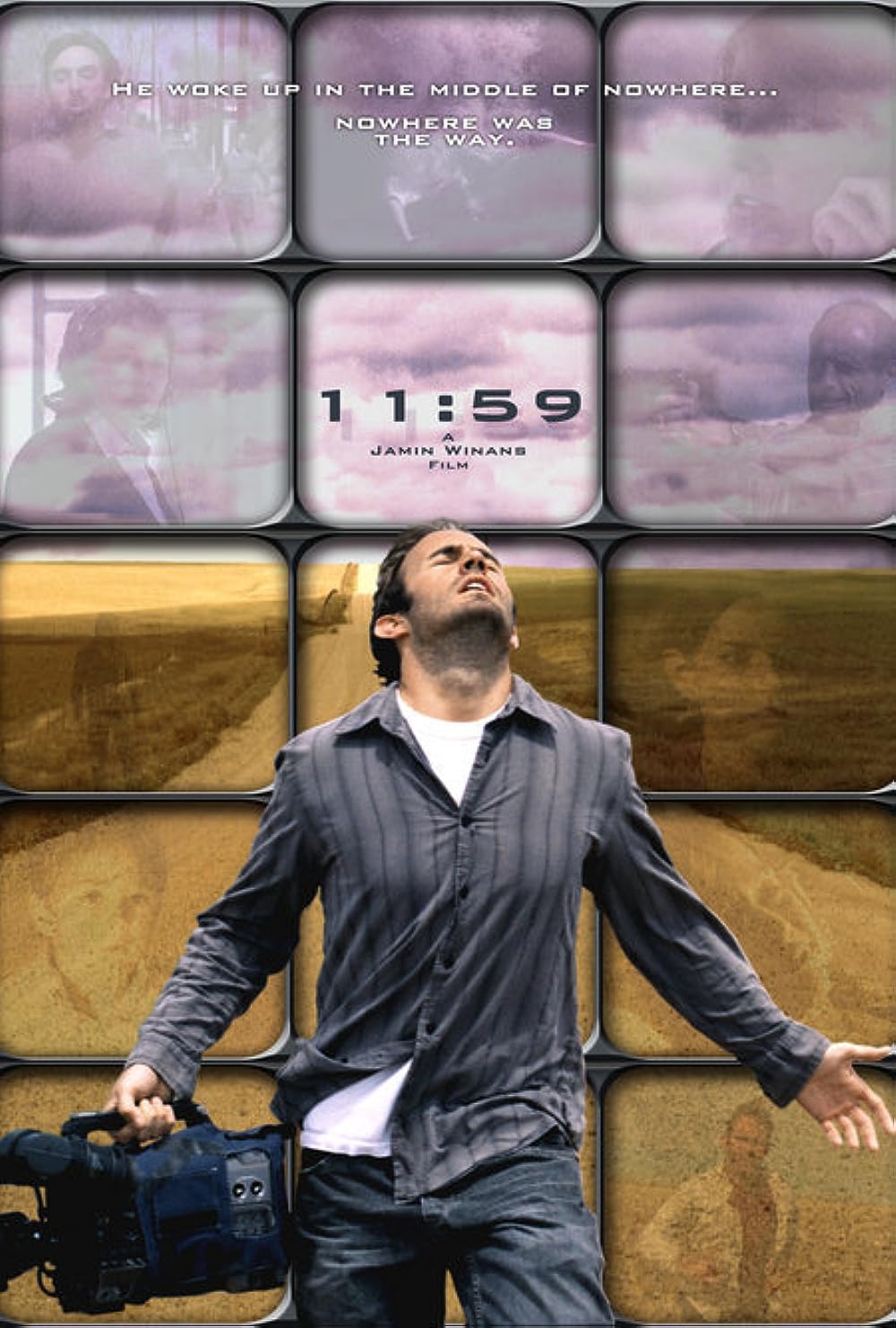 11:59: Directed by Jamin Winans. With Raymond Andrew Bailey, Laura Fuller, Megan Heffernan, Liz Cunningham. A jaded yet driven news photojournalist wakes up in the middle of nowhere and tries to piece together the events of the last 24 hours 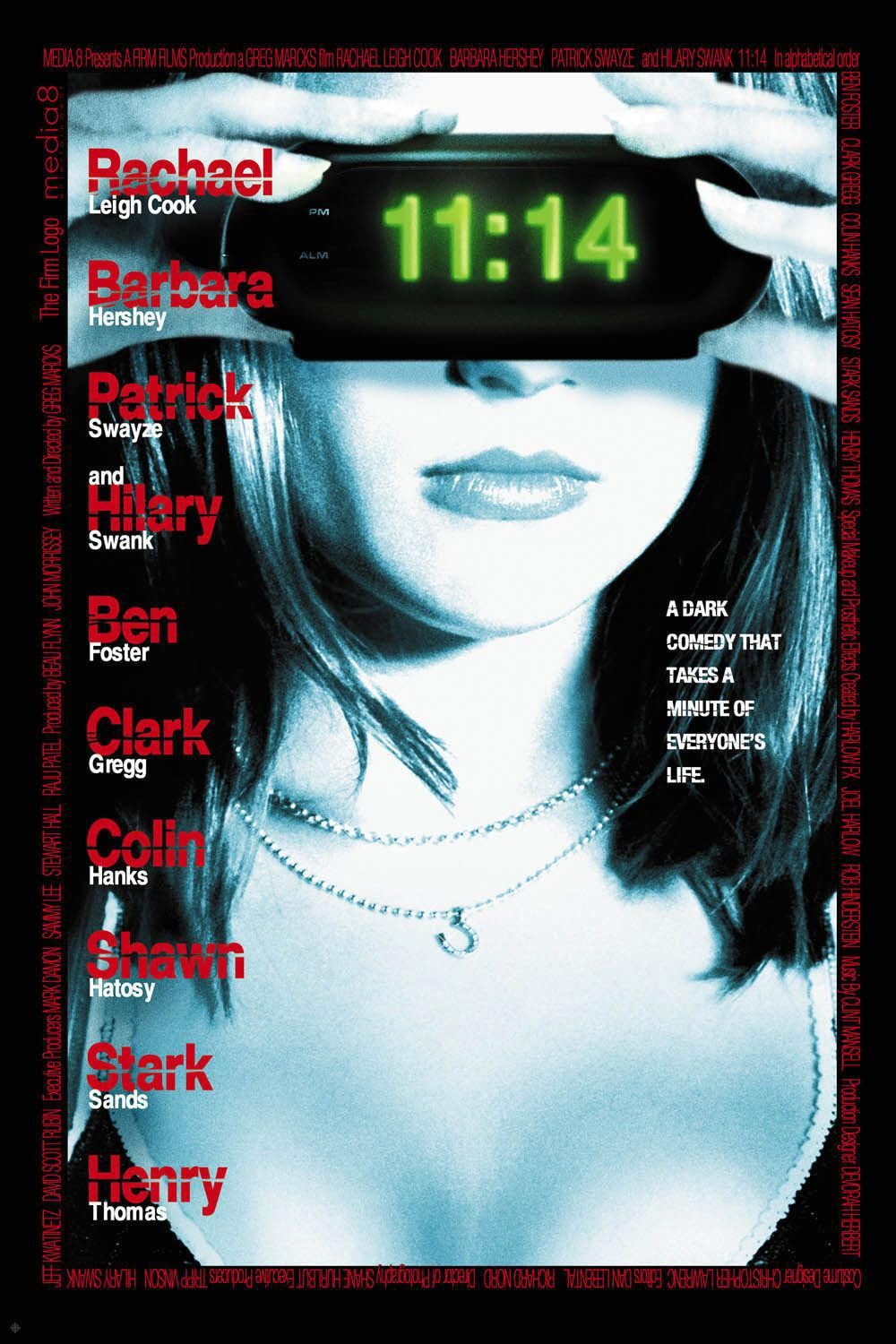 11:59 is the time that bugs me because it sends me into an earworm of the Blondie song!

11:59 is the time that bugs me because it sends me into an earworm of the Blondie song!