I’ve got a problem I’m not certain how to deal with anymore. A little over a year ago, I started receiving threats from someone I’d met online. These ocurred both via the telephone (I know I was stupid to have given out my phone number, but that’s not the issue at the moment.) and online communications. I contacted the police after the second threat, but was told that since it involved the internet, I needed to contact the Attorney General’s office. Did that, thought they were looking into it, and then got a nice letter from them informing me that it was out of their jurisdiction and I needed to contact the police department. Did that once again, and was told I needed to contact the DA’s office. Did that, and finally the ball got rolling. I took in literally hundreds of pages of chat room logs and e-mails full of filth, and spoke to the DA and the state police who work with the DA. Had to answer a plethora of questions, provide even more documentation, and juggle blindfolded while riding a unicycle, but they eventually determined that he should be charged with criminal harassment and threatening to kill me.

All the time that he was under investigation, he persisted with the threats and harassment. The day after his first court appearance, he posted my address in a chat room. He’s not at all phased by any of this, seeming to think that he’s invincible and can get away with anything.

I always thought it would be over with once he actually went to court. But it’s not. It seems as if he really is invincible and can get away with anything. He plea bargained and was given one year’s probation, at the end of which, assuming he stays out of trouble, the charges will be dismissed without a finding.

Now he’s still posting information about me online, and I don’t know what more I can do. This past weekend, he posted my name and street address into a chat room. A friend sent a log of the chat to both the police officer who was most involved in this case and me. I spoke with the detective after reading the log, and he said that he’d forwarded it to the DA and hopefully he could arrest the guy tonight, though of course it would depend on if the DA felt a probation violation had ocurred.

The DA doesn’t feel that a probation violation has taken place, however. I don’t understand how it can be acceptable to do what this guy has done, but I don’t study the law, the DA does.

Ok, if that were all he’d done, I probably wouldn’t be all that upset, but it’s just the tip of the iceberg. The guy has signed me up to an online dating service, promising rather out of the ordinary things, threatened to kill me repeatedly and in detail, given out my (thankfully changed by then) phone number stating that I was a prostitute who would to anything for my next hit of heroin, threatened to kill other people for the sole reason that they’ve talked to me, and just made a real nuisance of himself.

I’m tired of being scared. I’m tired of looking over my shoulder every other minute, not knowing if that guy over there is the creep that wants to kill me. I have no idea what this guy looks like. I know his name, screen names he uses, his age, and that he lives about 40 miles from me, but nothing else.

I had hoped the legal system would take care of this, but as it looks as if that’s not the case, I’m looking for ways to empower myself. I’ve changed my phone number, left the ISP I’d been using, am changing my name when my divorce is finalized, and am planning on moving when the school year is up. In the meantime, what more can I do to keep this guy away?

Oh, you’re probably right about this being the wrong forum. Sorry about that y’all. If someone would be so kind as to move this to where it belongs, I’d appreciate it.

Contact the local media and explain how the gummint is giving you the runaround. They’ll be happy to light a fire under their ass. Make sure they keep you anonymous, though.

Nobody wants him dead, but these types of people are psychos. If he does escalate the situation to the level where he’s willing to hurt you physically, you should be prepared, IMHO.

Continue to pursue your legal options. See a lawyer if you have to. You should be able to send him a cease and desist order when it comes to publishing your personal information online.

Other than that, ignore the creep. Most people harass others in expectation and anticipation of the reaction they’ll get. So far, he’s gotten his jollies off. Forbid him any more jollies. Don’t open any e-mail he sends. Don’t take any phone calls. Don’t respond to anything he does online. Tell your online friends that you are no longer interested in anything he says or does and ask them to stop “reporting” to you.

If the psycho shows up at your front door, don’t answer it. Call 911, and if you have no choice (i.e., he breaks in), be ready to kill the bastard.

Is there a women’s shelter or helpline for women at risk in your area? If so, go talk to them. They may have the muscle to raise the complaint level with the local police/D.A.

Oh, and i would respectfully disagree with Cilassi - keep a record of as much as possible that you know of that the guy is doing - document, document, document! To be successful in convincing the police of the problem, you have to show that it’s not just isolated incidents, but a long-term, continuous pattern of harassment.

Thanks for all the advice. I spoke with the DA again today and he’s issuing a summons and scheduling a hearing to make it a probation violation for this guy to post personal information about me online. I’ll look into taking a firearms safety class, but will hold off on actually getting one until after I’ve taken it to see what my comfort level there is going to be. I called the bar association today to get a lawyer referral for a cease and desist (prior to speaking with the DA) and was told that I’d need to go through the DA for that. It’s incredibly frustrating sometimes. Nobody seems to know quite how to handle matters when the internet is involved. If there are still problems after this next hearing, I do think I’ll contact the media. Thanks once again, y’all!

Ask the lawyer whether a suit for defamation would be any use.

Some of these links may be useful.

These are organizations that teach practical self-defense along the lines of the “model mugging” padded suit programs (all have links to other resources). Getting some training not only may save your life if it comes down to it, but will also help build some self-confidence that you can deal with whatever comes up: 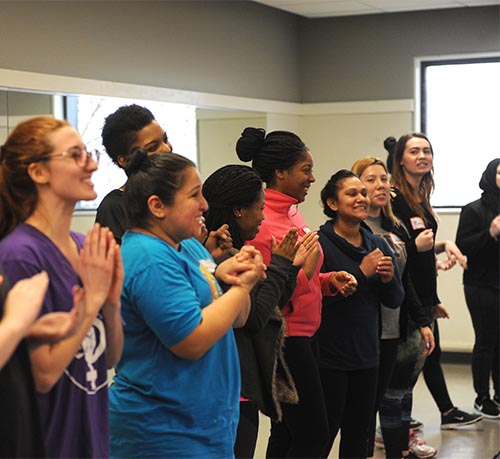 Empowerment based self-defense for women and girls.

Empowerment based self-defense for women and girls.

These are some more general sites about practical self-defense:

Also, whaddaya mean you don’t know what this guy looks like?!?! If he has appeared in court and been sentenced, even to probation, there should be a mug shot of him, and your lawyer or somebody should be able to get a copy of the picture. If not, it might be worth paying a private eye to take some pictures. You’re highest priority (at least one of them) has to be the ability to recognize this guy if he shows up outside your house, or walking behind you in a parking lot, or sneaking into your workplace.

You might also consider posting HIS name and address and a description of the problems he’s causing everywhere he posts information about you, although some people might say that would aggravate a bad situation.

I don’t know whether you want to be carrying a gun, or whether your state allows it. But you probably should make sure you always have pepper spray, a battery-powered alarm and a cell phone immediately accessible, not at the bottom of a large backpack.

www.kravmaga.com = best self-defense system out there (as long as we are recommending self-defense programs).

Your problems can be considered from at least three points of view.

The first is the viewpoint of criminal law. As you know from experience, it is up to the prosecutor’s office to pursue such remedies. The advice already given by some posters about contacting the local media or women’s advocacy groups may be of help in motivating the DA to act more quickly and aggressively.

The second is the viewpoint of the civil law. Inquire at your local legal aid society about your options regarding orders of protection, suits for harassment and defamation, etc. If they cannot represent you (either because you do not qualify as a client or because the services you require are not among the ones they provide), they should, at least, be able to refer you to private counsel.

The third is the practical. Your local police and/or women’s organizations in your area should be able to give you practical advice about protecting yourself.

Saving and keeping a record of emails is a different matter than reading them.

As an attorney who has a fair amount of experience representing clients at Order of Protection hearings, I can attest that it is very useful to keep documentation of when and how a stalker has attempted contact with you.

I can also state that it is generally a very good idea to avoid interaction with such a person as much as possible. In the City of St. Louis, for instance, there is a Family Court judge who routinely refuses to grant orders when a petitioner admits to having spoken to their abuser, even if it was only to plead with the person to stop calling. His reasoning is that the petitioner is essentially trying to drag the court into a private quarrel where it does not belong. This is often an unfair and unreasonable position to take, but it is nonetheless the attitude many judges take. There is also the point that arguing or pleading with a creep is liable to encourage them to just harrass you some more.

I’m pretty ignorant of the law - but maybe you should speak to a lawyer and get a restraining order against him. At least that way it’s on record, even if he doesn’t abide by it, and it’ll increase the severity of his crime if he actually stalks you.