Am I missing something with this Laffy Taffy joke?

So the Laffy Taffy wrappers have what claim to be jokes printed on them. Most of them are along the lines of, “How do you know a vampire has a cold? By his coffin!” (haw haw!) or “How do you fix a jack-o-lantern? With a pumpkin patch!” (oh, my aching sides), but this one baffles me:

Q: Why did they carve a big mouth into the pumpkin?
A: So he could scream and howl!

Um…okay. It’s not a bad pun of any kind that I can figure out. Jack-o-lanterns aren’t generally known for their vocal capabilities, so any joking reference to folklore or legend is out, as well. Is there something I’m missing here, or were the label printers brains already rendered into mush from having to read so many jokes like "How does a witch keep her hair in place while flying? “With scare-spray!” so that they let this total non-sequitor slip into the system without noticing that it makes no sense at all?

I don’t see anything funny about it, either, but maybe it was done that way deliberately? You could be right - the joke writers might have become just a tad punchy.

I wonder if they got the old classic: How do you unlock a haunted house? With a skeleton key!!

Or my favorite (not really child-friendly): What do you get when you goose a ghost? A handful of sheet.

Actually, they have “How do you unlock a haunted house? With a spoo-key!”. Which isn’t as painful as “What kind of car does a ghost drive? A boo-ick!” but it comes close.

That joke has the potential to become a classic in this house. It is very similar to a few of my favorites:

Q: Why did the monkey fall out of the tree?
A: Because he was dead.

Q: With what does Boy George brush his teeth?
A: A toothbrush

Your joke is along the same lines – a realistic answer when the hearer is expecting something funny. Of course the pumpkin needs a mouth to scream and howl, duh!

Marlitharn, the joke doesn’t really make sense, but it reminded me of a YouTube I saw last year… 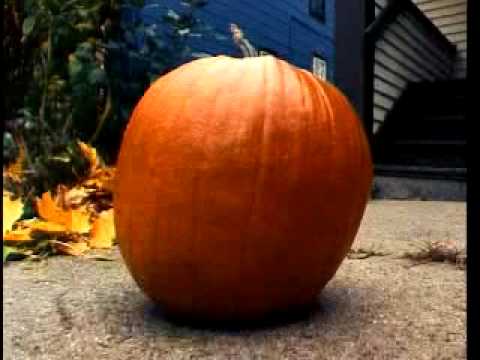 Q: Why did they carve a big mouth into the pumpkin?
A: So he could scream and howl!

My guess: the answer to this joke originally read: “So he could howl and scream.” The subtle wit of this answer derives from the fact that the phrase “howl and scream,” if you squint hard and hold your breath after huffing taffy fumes, vaguely resembles the word “Halloween.”

Evidently the Oompa-loompa responsible for transcribing that particular gag somehow failed to recognize this as humor, and inadvertently reversed the key words of the punchline, thus rendering the joke meaningless. Either that or it’s a desperate cry for help.

Why is a giraffe’s neck so long?
Because its head is so far away from its body.

What’s green, has eight legs, and would kill you if it fell on you from out of a tree?

The closest thing I could come up with is kinda morbid. If you jabbed a knife in someone’s face, they would likely howl and scream. Since pumpkins don’t have mouths, they can’t scream, so by jabbing a knife in their face, you give them a chance to scream and howl…? or something.

What do hillbillies do for Halloween?
Pump kin.

Aren’t Laffy Taffy jokes usually sent in by kids? That joke sounds like one my daughter would tell when she was about three years old. She was very fond of making up her own jokes, but she didn’t quite get yet what made jokes funny–to older people, at least. She thought they were hilarious.

Some kid wrote his own joke–perhaps Laffy Taffy doesn’t reject jokes no matter how lame they are.

My daughter came home w/ this in about the 2nd or 3rd grade:
Why don’t witches have babies?
"cause their husbands have halloweenies!
As to the OP, I suspect it’s just the ridiculousness of it, like: “What’s purple and goes, Blam, blam, blam; blam?”. (ans.) “A four door plum!”
Kids (and some adults) get on a roll w/ the nonsensical and just start laughing at almost anything.

You know, I should invent a line of condoms with jokes or funny slogans inside the wrapper.

“Wrap it in foil before checking her oil!”

"If you go into heat, package your meat! "

“Cover your stump before you hump!”

“You can’t go wrong if you shield your dong”
Nah, forget it.

What ever hapened to the god old days of Laffy Taffy?

Q. How many flies does it take to screw in a light bulb?

A. two, but I don’t know how they got in there.

You know, I should invent a line of condoms with jokes or funny slogans inside the wrapper.

I can totally see you re-inventing ‘Bazooka-Joe’.

I had the best/worst joke book ever when I was a kid. It was called “Spooky Riddles and Jokes” and featured such gems as:

This prompted my brother and I to make up our own, one of which was:

What do lady ghosts have? BOO-BS! HAR HAR HAR!

I think the joke is that the pumpkin is howling and screaming since you’re carving it, but of course it couldn’t since it didn’t have a mouth.

So you’re carving it so it can react to your carving!

Montgomery0, Sage Rat: Not as gruesome as the people in the UK who cut up swedes for Halloween. Absolutely horrible.

The closest thing I could come up with is kinda morbid. If you jabbed a knife in someone’s face, they would likely howl and scream. Since pumpkins don’t have mouths, they can’t scream, so by jabbing a knife in their face, you give them a chance to scream and howl…? or something.

I have no mouth, and I must howl and scream.

What’s green, has eight legs, and would kill you if it fell on you from out of a tree?

What do hillbillies do for Halloween?
Pump kin.

It could be because I am drunk but you almost made me pee myself.