Are expensive funerals worth it?

I was thinking about the high cost of funerals - embalming, elaborate caskets, elaborate services, etc… and I’m thinking why? I’d rather my family use the money for things they need rather than go thru all that when I’m gone.

I’ve told them I want to be buried in a simple pine box with no elaborate funeral which means a basic service only with no viewing.

I think you have every right to have the kind of funeral you want and that your family ought to honor your wishes.

But if you’re looking for a debate, I think you should go the cremation route.

I dunno, funerals are for the living.

A lot of people like elaborate funerals and are just dying to have them. It’s not like the money is being poured into the ground, funeral directors spend their income, casket makers spend their profits, etc. If that’s the segment of the economy you want to stimulate, go for it.

I think you have every right to have the kind of funeral you want and that your family ought to honor your wishes.

On condition that you leave them enough money to cover the costs.

You might want to read Jessica Mitford’s The American Way of Death. You’ll be an informed consumer–and it’s some of the best nonfiction I’ve ever read. Fascinating and funny.

One thing about going for the full funeral, when my mother died I was still at the mercy of a funeral home director driving for more than I would have chosen. Family members can get influenced by that and their own grief, too. Best thing may be to write out your own “pre-need” (sic) plan and make it official with the people who will be handling your death.

I think polls work better in IMHO than in GD.

you won’t care what it is.

whoever pays for it gets to decide.

On a board where people compete to prove they had the cheapest wedding in all Dopedom, I doubt you’re going to find many people to endorse the lavish funeral.

I’m Jewish and Jews don’t embalm (or have open casket viewing), and bury the dead in a simple pine box. So I’m actually kind of unfamiliar with some if the more lavish Christian traditions, and they seem gross to me, but like all things culture, it depends what you’re used to. For the people who go in for fancy funeral arrangements, I’m sure they see it as a sign of respect and love for the deceased.

Reminds me of a conversation between a family friend and my dad some years ago. The family friend quipped that he didn’t care what’s done with his body once he’s dead. For all he cared, they can take it to the city dump. My dad immediately chimed in, “Sure, but think of where your wife and children will have to come to pay their respects.”

I thought mine was…

I don’t see the point of elaborate, expensive funeral OR weddings OR any other ceremony.

You think our funerals are elaborate? Check out what they do in Ghana! 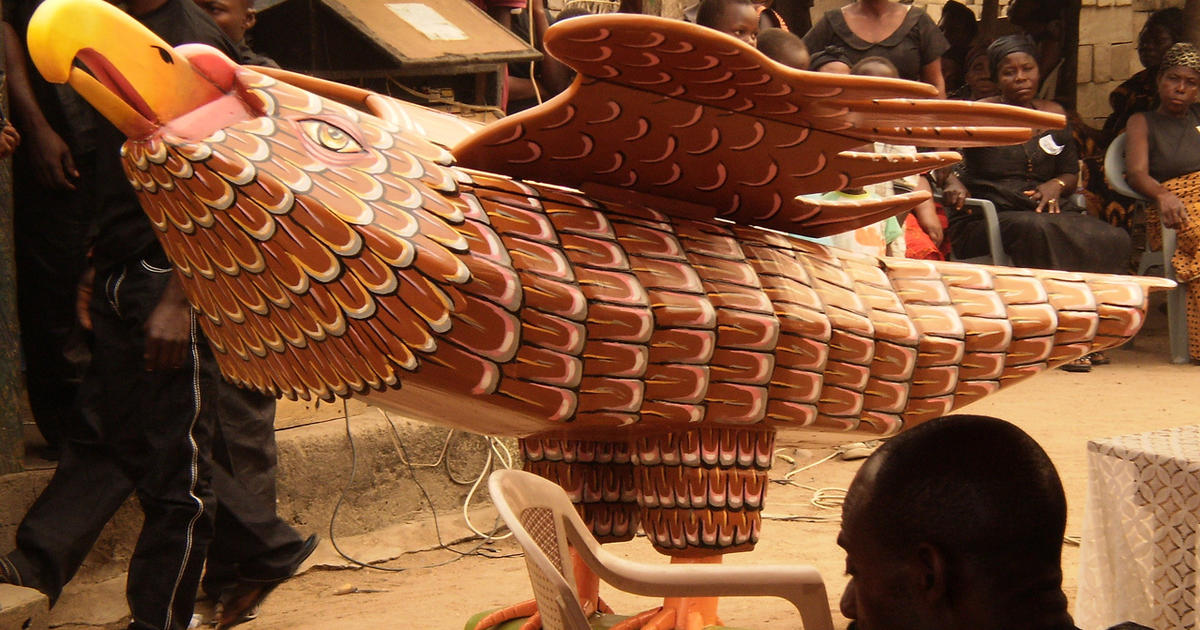 These colorful coffins display the artistry of their creators, and the passions of the deceased

You might want to read Jessica Mitford’s The American Way of Death. You’ll be an informed consumer–and it’s some of the best nonfiction I’ve ever read. Fascinating and funny.

Like Hello Again, I’m Jewish and used to more moderate funeral rituals, including the thing where we don’t send flowers. Some of those “simple pine boxes” are pretty fancy and expensive, but they’re still a lot less expensive than the uber-coffins with the embalming and the concrete vaults and the I-don’t-know-what-else. (I’m not sure how you can say “ashes to ashes, dust to dust” at a funeral when you’re trying everything you can to keep the body from rotting.)

Funerals are for the living, yeah. Like the Jews above, I have similar feelings about funerary practices. To me, the most important part of a funeral is the gathering of people and the opportunity to talk, laugh, cry, and eat together. None of that happens at the actual service.

I dunno, funerals are for the living.

Yep. A friend of mine lived a frugal life but died young and his family gave him as elaborate a send-off as they could - more than they could, really.

They couldn’t bear to see him in a cardboard coffin even though that’s what he wanted, because only the unmourned, friendless dead go to the earth (or the sky) in a pauper’s coffin. They went for a mid-range coffin as far as I could tell - proper wood, but no gold. It was kinda like choosing between dressing your child - the last time you’ll dress them, sort of - in decent clothes for a public occasion and taking them to that occasion in hand-me-downs two sizes too big and frayed.

It doesn’t only apply to children, of course. My Grandad always dressed well. I wasn’t going to see him going through the crematorium in a box shabbier than the clothes he usually wore. I think we went for the next level or two up, proper but not gaudy, which kinda of fitted how he dressed too.

For my young friend, and a few other people I’ve known who’ve died young, the main costs were actually in the wake. I think it’s fine for the families to want to accommodate all those who want to come to the wake and for people who die young that can be a whole ton of guests.

I think it depends. First, I think everyone should really put some thought into what they want to be done when they die. As morbid as it sounds to “plan ahead”, it can save a lot of hassle in the long run. I believe funeral homes have a distinct advantage in selling product to people who are often not in the best state of mind to negotiate or read fine print. In addition, similar to weddings, a person has the ‘I’m only doing this once might as well go all out.’ Both these things can allow funeral homes to really gouge the bereaved which is messed up. Which is why its good to think ahead.

In my wife’s family, funerals are a big deal. Her family is huge, so its natural somebody has passed away recently at any given time (both parents are among the younger of their 10 and 12 siblings respectively). They will often have Mariachi play in the church and at the cemetary, which is really nice. My wife told me if she dies before me she’d want a closed casket, though admits she’s a bit vain in that she’d want to be dressed really well and have good makeup (none of this zombified clown business funerals often cake on a corpse’s face). Her and I both agreed we’d prefer a really nice wake over a super lavish funeral. Personally I think the wake is a way for people to celebrate the deceased by reflecting on their life, rather than focusing on their absence. I want my wake to be a rip roaring party, with live music for everybody, tons of booze, people laughing and dancing and talking about all my drunken and spastic antics (just please nobody puke or pee in my urn!).

The kind of funeral where 2 drunk nerds get in a fight accusing each other of cheating in Stratego. That would be a great funeral

You can make all the plans you want, but pre-paying for everything shows that you’re serious in a way that nothing else can. It won’t stop the truly determined from upgrading, but it will make it much more likely that your basic plan will be followed.

I can imagine that in certain groups, maintaining family prestige could be a benefit of a pricey funeral. And I can imagine people feeling like they’re giving something to the deceased. But I come from a long line of skinflints. We admire a home grown, pot luck approach.

You can make all the plans you want, but pre-paying for everything shows that you’re serious in a way that nothing else can. It won’t stop the truly determined from upgrading, but it will make it much more likely that your basic plan will be followed.

I agree 100% with this. We pre-paid my father funeral (long story) a few years before he died and we just went with it when he did die. Middle of the road or slightly less.

We didn’t for my mother. And in my low point (everyone’s low point, these bastards at the funeral homes are great a subtle manipulation) I caved a bit. And looking back, it really makes no difference how she was buried.

Solid gold or cardboard, they are gone, and living are left hoping they did right by them when they were alive when it mattered.

If you really, sincerely, wanted a simply casket, could you put that in your will? Perhaps with a stipulation like “anyone who benefits from this will will find their terms null and void if I’m I’m not buried in the simplest casket available?”

I would sincerely want a simple casket but would also understand my heirs wanting to do something different, as I said above, but if my will said that they’d understand it and it would be a get-out for for anyone who though they were being cheap.

As an aside: can you bar people from coming to your funeral and wake? As in, “All legal and civil means should be made to prevent [such person or persons] from having any part in this funeral. This includes, but does not exclude, being a pall-bearer, giving speeches…” etc. And then bar your heirs if they don’t take such measures?

I’m planning to have a Viking-style funeral, but without all the expense of boats and whatnot. I’ve got a nice tarp picked out and waiting in the garage. When I die, all my loved ones have to do is pour gasoline on it and then use it to drag my body out into the street where I can be safely set ablaze while everyone stands in the driveyway and sings Norse songs of old.

If that’s too much trouble, I figure they can still get some Scandinavian flavor by hauling me to IKEA and leaving me in a cart in one of the lesser trafficked parts of the store.