Boiled baby and a cup of warm hair

I’m pretty sure this was in a Harlan Ellison story. The line was something like ‘She looked at me as if I’d just said, “I’ll have the boiled baby and a cup of warm hair.”’

Can anyone identify the story?

Aside: This would be a good sequential thread after the ‘What’s for dinner’ thread.

Aha! That’s why I couldn’t find it.

“Croque Hawaiian” sounds even worse. Is that a grilled cheese sandwich with pineapple? 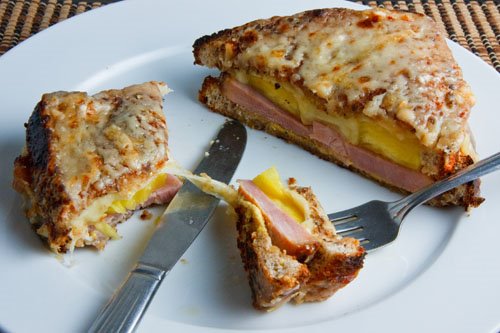 I discovered the croque monsieur a while ago and I have been enjoying them ever since. A croque monsieur is basically a glorified grilled ham and cheese sandwich covered with bechamel sauce and melted golden

Oh man. I might try making that for dinner next week.

Makes sense. Boiling the baby loses most of the flavor, unless you’re also making a gravy out of the broth.

“a cup of warm hair! AHAHAHAHAH!” followed by a bunch of hair pins swirling in the air.

There was a British pudding called “Boiled Baby” or “Drowned Baby” in the late 1700’s. I’ve got a recipe for it. No actual baby required.

I made the Croque Hawaii last night! It was pretty good, although I think I can improve next time by using better ham. Also, it’s not health food by any stretch of the imagination, so I doubt it will make it into regular rotation but it was a nice change. Thanks @Johnny_L.A !