There’s not even any measuring involved: one jar grape jelly, one jar chili sauce. Splork into the pot with the meatballs and heat.

I’m convinced that 90% of HCS sold is used in that meatball recipe.

I dislike just naked ketchup for almost anything, and really don’t understand our national passion for glopping it all over French fries, hot dogs, sausage, eggs, etc., thus totally ruining them. It’s basically just tomatoes and a shitload of sugar.

Putting aside the fact that there are many different brands and qualities of ketchup, I think the dislike that good cooks like yourself have for ketchup is that it’s so often abused, like the archetypal boor who orders a fine omelet in a good restaurant and smothers it in ketchup. Or a certain individual who shall remain nameless, in order not to get political, who is said to like his steaks well-done so that they resemble gray shoe leather, and then smothers them in ketchup.

But ketchup has a basic taste quality that research has found to be very basic and satisfying. There is a word for it that I read in an extensive article once that I forget, but it was probably “umami”. From a similar New Yorker article:

There are five known fundamental tastes in the human palate: salty, sweet, sour, bitter, and umami. Umami is the proteiny, full-bodied taste of chicken soup, or cured meat, or fish stock, or aged cheese, or mother’s milk, or soy sauce, or mushrooms, or seaweed, or cooked tomato. “Umami adds body,” Gary Beauchamp, who heads the Monell Chemical Senses Center, in Philadelphia, says. “If you add it to a soup, it makes the soup seem like it’s thicker—it gives it sensory heft. It turns a soup from salt water into a food.” When Heinz moved to ripe tomatoes and increased the percentage of tomato solids, he made ketchup, first and foremost, a potent source of umami ...

… The taste of Heinz’s ketchup began at the tip of the tongue, where our receptors for sweet and salty first appear, moved along the sides, where sour notes seem the strongest, then hit the back of the tongue, for umami and bitter, in one long crescendo. How many things in the supermarket run the sensory spectrum like this?

Good answer. Ketchup has its uses, of course. I use it to make a meatloaf glaze or to mix with mayo and some other things for a sauce. My objection to it is dumping excessive amounts of it on things like fries or (shudder) a steak. I remember back when I was first in college, I took a girl to a really nice steak house. She ordered her meat well done and then asked – to the horror of the waiter – for ketchup. I remember thinking “Well, that’s that.” The modern version of ketchup on everything is ranch dressing on everything from wings to pizza.

As for umami, I’m a big fan of Chef Kenji, who is the master of umami bombs in cooking. Things like soy, Worcestershire, anchovies and fish sauce are all in my cupboard. I draw the line at Marmite, though.

I draw the line at Marmite, though

Marmite has a terrible texture. Vegemite is still, even corrupted by Kraft, better. Or you can use that “better than bouillon” stuff, which is basically the same thing.

My son told me that a friend of his insisted on him trying it. He said he couldn’t get the taste of dirt out of his mouth for hours afterward.

Pour it over a block of Philly cream cheese and serve with Wheat Thins.

This was considered “classy” about 50 years ago. And, yeah, I remember it, and I have eaten it.

This sounds like it should be an entry in the Gallery of Regrettable Food.

FWIW, Galloping Gourmet Graham Kerr made curry with black currant jam on TV back in the '60s or '70s. He did it so that every taste bud would scream in puzzled frustration "What IS that?!?)

Marmite has a terrible texture (AND tastes terrible) if you eat it straight out of the jar. I’ll never understand why it always has to be repeated: That’s NOT how it’s meant to be eaten! It’s supposed to be spread very thinly on hot buttered toast (or plain white bread, if you want a camper’s sandwich).

… in the Gallery of Regrettable Food .

Wow; Lileks yet lives! Whodathunkit?? One of my favorite sites from Ye Olden Tymes before commerce discovered dominated the internet.

A couple of computers ago I tried to clean the dead links out of my section of ancient favorites and after so very few came back live, just pitched the rest untested. Including Lileks.

Ah yes, the days when we treasured the links we’d accumulated and shared because search didn’t really work and you could never count on finding something again unless you saved it. Now search doesn’t work for a different reason: you can’t find the noncommercial stuff among all the thousands of links trying to sell you something.

Aside: I like your technique of bolding inline URLs. Otherwise the blue link doesn’t stand out that much against the black text and otherr folks may not even notice that it’s an inline cite. I’m going to start doing the same.

Aside: I like your technique of bolding inline URLs. Otherwise the blue link doesn’t stand out that much against the black text and otherr folks may not even notice that it’s an inline cite. I’m going to start doing the same.

Thanks appreciate the feedback. It’s become a pretty automatic sequence:

Not really. Just Bachelor “Cooking.” Our favorite was to pour Pickapeppa Sauce over a block of cream cheese. Still used Wheat Thins, though.

I’ve been building my urls and entering my formatting mostly manually because I’ve been using markdown for years on sites that don’t have a smart edit box or keyboard shortcuts. I like your way better … once I train my fingers.

I’d offer a slight change to your sequence to make it even more keyboard-friendly.

Not really. Just Bachelor “Cooking.” Our favorite was to pour Pickapeppa Sauce over a block of cream cheese. Still used Wheat Thins, though.

When you wanted to get really schmancy, you put little shrimps on top!

Well la-ti-da! Aren’t we the fancy ones?

Now I have to try it your way, you rat.

… in the Gallery of Regrettable Food .

Wow; Lileks yet lives! Whodathunkit?? One of my favorite sites from Ye Olden Tymes before commerce discovered dominated the internet.

A couple of computers ago I tried to clean the dead links out of my section of ancient favorites and after so very few came back live, just pitched the rest untested. Including Lileks.

I’ve spent many pleasant hours over at the Lileks site. The “Gallery of Regrettable Food” is one of the highlights, but there’s lots of other entertaining stuff.

The Gobbler hotel and the Dorcus collection are two of my old favorites. But yes, Regrettable Food is one of his signature sections.

There used to be an amateur site called something close to “Kate’s garage sale finds” where she’d buy some amazing schlock for a buck then post pix and wry commentary about them. Sort of a visual blog a decade before the term “blog” was invented.

Akin to Lilek’s Regrettable Food she had quite a collection of late 50s / early 60s cookbooks that she’d share highlights (lowlights?) from. The sorts of cookbooks where every ingredient was made by Kraft®™ or Borden®™ and had an ® or a ™ after it. That she and I were a similar age and recall our Moms’ foisting some of those ®™ horrors off on us as little kids made her work all the better from my POV.

Some Googling says her site is long gone. There’s a similar name on pinterest, but doesn’t have the same feel.

Now I have to try it your way, you rat.

I have part of one of my family’s recipes, which is typed out and labeled as being from my maternal grandfather’s mother. No procedure, just a list of ingreidents.

I’m assuming that the vinegar would be plain white vinegar, and that the cloves would be ground where possible, but I don’t have any proof of that.

My guess for a procedure would be to combine it all in a pot and stew it for a good long while, and then run through a blender/food mill to homogenize it before jarring or bottling. That’s how this substantially similar recipe does it. 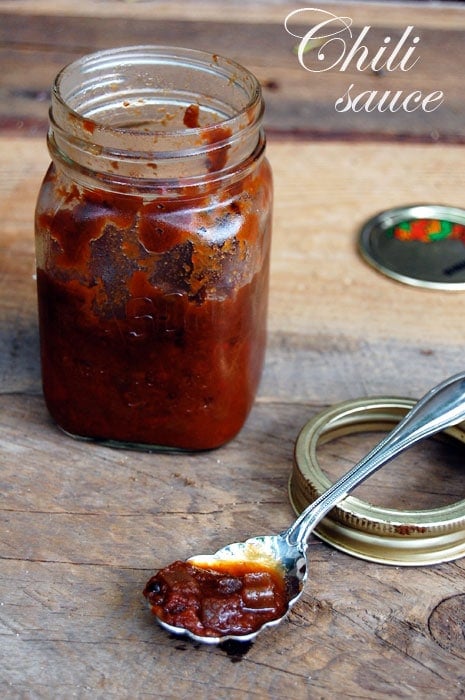 Yeahhhhhhhhhh!!!!!!  It's fall and that means Old fashioned Chili Sauce!  The tangy, sweet, spicy condiment that makes pork, potato pancakes and chicken come ALIVE.  Well, not technically 'alive'. That would be quite scary.   If...