Did Pelosi just un-invite Trump from the State of the Union?

How vindictive can this asshole get? I didn’t notice any restrictions on the Executive branch when it comes to travel.

I just happened to see a travel schedule for a certain Executive Branch agency that has been funded, in which there’s a legitimate conference on important topics that is occurring… preceded by a golf scramble. I believe most of the participants at the conference would be government personnel.

Should I hold my breath for the golf day to be cancelled? I think not. Especially with this occupant of the Oval Office.

I doubt it changed anyone’s mind.

What counts for me is that the ones that can change their mind are changing it now, but to disapprove of Trump, enough to conclude that the ones expecting that the minds will change to support Trump are ignoring evidence that Trump is not winning hearts and minds on this shutdown. 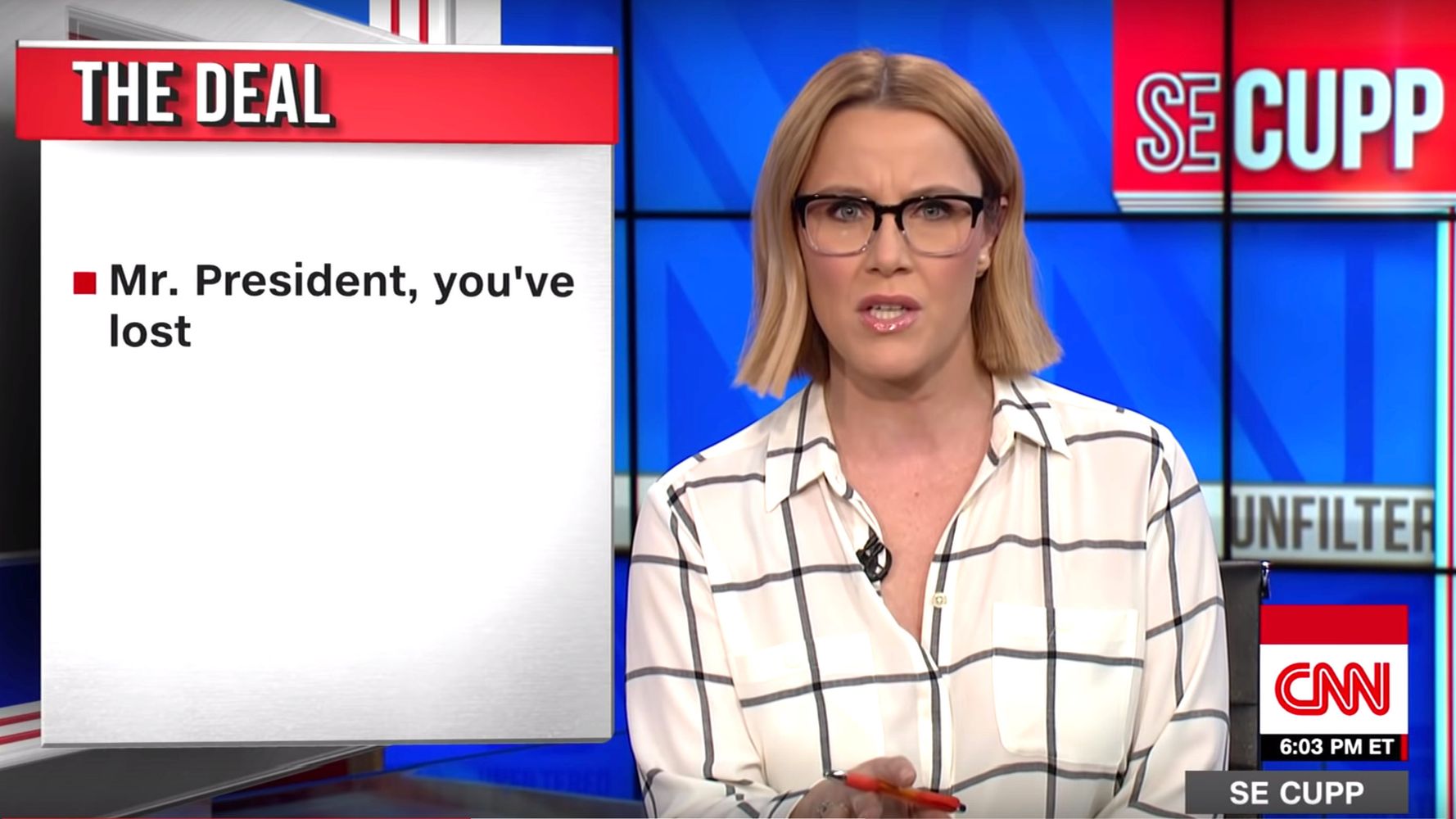 Conservative S.E. Cupp Tells Trump To Give Up: 'This Is What Losing Looks Like'

“So now it’s time to accept the loss and move on to what’s next.”

Conservative S.E. Cupp Tells Trump To Give Up: ‘This Is What Losing Looks Like’

Trump loses support among his core voting groups as the shutdown drags on,...

The poll results come in the midst of the government shutdown and as multiple Democratic lawmakers announce 2020 bids to challenge Trump.

Trump loses support among his core voting groups as the shutdown drags on, polls say

Can we close the McDonald’s closest to the White House?

The Speaker of the House doesn’t have that power, if that’s what you’re asking.

No I was actually making a joke.

No I was actually making a joke.

You think Republicans can see a joke? They elected one.

These are people currently supporting concentration camps for children. It’s safe to say they’re not just unreachable, but that attempting to reach them demeans the reacher.

A reasonable plan: Deal plainly and with integrity, and accept the support of anyone who wants to do the same. The others can fend for themselves.

…Removing barriers to voting seems to be a necessary precondition for this approach. With reforms like AVR, same-day registration, abundant early voting sites, absentee voting without a need to provide a reason, the % of eligible voters who vote goes way up.
In the absence of those reforms, every few years a candidate says something along the lines of how he’s going to get the nonvoting majority to vote for him, and it never pans out.

True. As you undoubtedly know, Obama is giving this issue his attention (along with Eric Holder). Though of course it’s a difficult problem to solve, improvement is not impossible.

“Not getting paid” is not, I think, an entirely accurate description of the situation. They will receive payment, just not right now. …

So you think when Secret Service or Coast Guard or TSA or others working without pay roll up to the gas station with empty tanks, the gas station owners will accept the assurance “you’ll receive payment, just not right now” and let them fill up?

Will grocery stores and pharmacies provide needed food and medicine on those terms, do you think? Will landlords who have their own mortgage payments to make? How would they be able to do that without losing the properties (let alone their credit ratings)?

How does that all work? Can you offer some evidence that your implication that this is no big deal is correct?
(my emphasis)

I think it’s kind of like how Mexico is still, somehow, going to inderectly yet pointedly pay for the fucking wall.

I think it’s kind of like how Mexico is still, somehow, going to inderectly yet pointedly pay for the fucking wall.

In other words, it all makes sense if your capacity to embrace delusion is strong enough…

I assume you’re referring to the Executive Branch. There is no such person. (See post #303.) Sorry to keep bursting your bubble.

I’d be interested in reading a thread discussing strong versus weak unitary executive theory if you’d be so kind as to start one with your own position. TIA.

It wasn’t her position that the headline referred to as “shifting” but her reasoning. And it did.

House Speaker Nancy Pelosi renewed her call to postpone the State of the Union address but changed her reasons Thursday, saying her worry isn’t that the Secret Service can’t do its job but rather that they shouldn’t be asked to do it while they’re not getting paid.

After that pushback, Mrs. Pelosi shifted her argument Thursday, saying she believes the Secret Service can protect the event successfully — but they shouldn’t have to as long as they’re not getting paid for the work.

…
“It isn’t a question of are they professional enough,” she said. “The question is they should be paid.”

It wasn’t her position that the headline referred to as “shifting” but her reasoning. And it did.

Would you please cite your source? I’m not doubting anything, but I would like to read the entire article.

Would you please cite your source? I’m not doubting anything, but I would like to read the entire article.

Here you go. It’s the Washington Times, so don’t expect much.

“I’ll tell you what you should do. You should go listen to Sean Hannity, Rush Limbaugh and Ann Coulter, because they’re running this government,” Williams, who is a columnist for The Hill, said in an exchange with GOP strategist Karl Rove in an appearance on “The Story” on Fox News.

If you really think Ann Coulter’s blessing is a necessary precondition to getting a deal with President Trump, it’s not such a wild and crazy idea to go have a sit-down with Ann Coulter and find out what she thinks is acceptable.

Lovely demographic for the dims to covet so highly.

Well, I suppose I could repeat an argument or explanation I’ve provided that a poster hasn’t responded to and may have overlooked, or I could just point to it.

Not sure why one would be better or worse ‘form’ than the other.

That must seriously hurt the feelings of the Fox and Friends couch potatoes.

Here you go. It’s the Washington Times, so don’t expect much.

I at least expected it to make a case that Pelosi had switched positions. All they did was quote what she said and take it as given that it was a different position.

But it isn’t. If they can’t pay them, then they can’t afford to do the job under the current budge. Those are the same position. They could have at least tried to argue it was different.

Pelosi called the tune and the Democrats marched in lockstep. Elected Democrats refused to go to a meeting to discuss the shutdown while Schumer was telling the media outlets that the President wouldn’t talk to Democrats about the issue???

I’m a little bit confused what you think there is to negotiate. Neither republicans nor democrats want the government shut down, the senate passed a bill to open the government 100-0 in the last session, the house passed that same bill, and now for some reason, the senate won’t even consider it. There’s not really anything to negotiate - republicans can end the shutdown whenever they want. As soon as they want to, they can get back to good-faith governance, i.e. if they want policy, they can either convince the democrats it’s a good idea, or negotiate for something that the democrats want without holding the government hostage over it. Y’know, the way these things are supposed to work.

In reality, any “negotiation” over the shutdown comes down to “give us the wall or we keep torturing the hostage”. That’s not negotiation, and the good news is that, for once, the American people aren’t falling for it.

Lovely demographic for the dims to covet so highly.

I personally think that you do your sentence you should have most if not all rights and privileges restored. I also am not naive enough to think that that does not disproportionately help one party.

Since all that is off topic I’ll send you a pm.

In retrospect I don’t think I can add anything to these three posts. “A greek tragedy in three posts”? On the whole, this thread really is kind of depressing to read, because even here, on a board dedicated to fighting ignorance, the conservative posts are just… so bad.

I personally think that you do your sentence you should have most if not all rights and privileges restored. I also am not naive enough to think that that does not disproportionately help one party.

That’s fine. What wasn’t fine was your saying, “Lovely demographic for the dims to covet so highly.”

Do you have a problem with that demographic, or don’t you? And if so, what’s your problem?