I was a big fan of The Equalizer back in the 1980’s. Woodward’s heart condition led to an early cancellation of this award winning show. Woodward was nominated for Emmy’s and actually won The Goldens Globe in 1987 for his work in this role.

The Equalizer Awards and Nominations

I saw Woodward in The Wicker Man. He’d changed a lot in the last twenty years. It was good to see him still working, because his heart attack in 1987 was very serious. He returned to The Equalize afterwords, but it wasn’t the same. He didn’t have the same physical approach to the role.

A Salute to Sgt. Howie!

And all the trumpets sounded for him on the other side!

Man, I used to love that show - it was quite cheesy, but Woodward brought some great stoic subtlety to the role. RIP to a fine actor.

I’ll always remember Woodward for his fantastic performance in “Breaker Morant”. Have to pull it out and watch it this weekend.

“If you encounter any Boers
You really must not loot 'em!
And if you wish to leave these shores,
For pity’s sake, don’t shoot 'em!”

Here’s a short clip of the Equalizer’s best moments. For a middle-aged guy, Woodward brought an incredible physical intensity to the character. The Equalizer was bad ass. 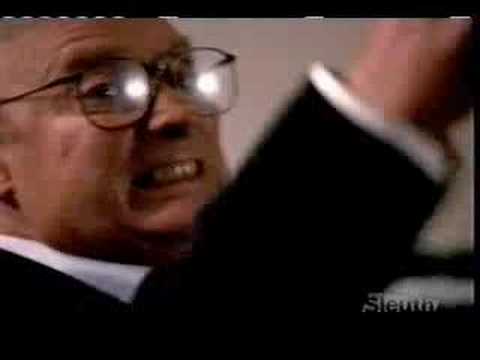 I think I remember that show. He played a spy/assassin in the 1960’s?

I’ve never seen The Equalizer. My first thought was Breaker Morant, followed by A Christmas Carol and The Wicker Man.

I’m glad he met a more peaceful end than Sgt. Howie did.

I think I remember that show. He played a spy/assassin in the 1960’s?

Yeah. It was iconic early television. Really cheap B&W production values but I can still recall scenes 40 years later. He managed to always seem really, really pissed off no matter what he said or did.

I looked it up on IMDB and it seems to me that his filmography is missing a B movie that I vaguely recall. He played a nutjob who set himself up in a shop with a rifle intending to shoot shoppers in the street below. I saw it as the first half of a double feature and hopefully someone else will remember it.

Wasn’t there an Equalizer Episode where he was hired by a Holocaust survivor?

I loved The Equalizer as a kid, and Woodward still stands as one of TV’s smartest, savvies badasses. He was nominated for an Emmy every year of the show’s run, but never won. It’s from there that I discovered Breaker, Wicker and even the not-good King David where he was very very good as King Saul.

It was a treat seeing him again recently in Hot Fuzz, but his years were catching up on him, and I can only hope his golden years were full of happiness and contentment, since every interview I saw with him made him seem like a cool, good-humored guy.

I’m glad he met a more peaceful end than Sgt. Howie did.

That was my first thought, followed by wondering if his body would be returned to the earth, or to fire, to air, or water… (Yes, I’ve seen that movie way too many times.)

Fans of EW and the original *Wicker Man *must see, if they haven’t already, the Simon Pegg comedy Hot Fuzz!, in which EW played a small but important part as a village elder with a secret – a role that let him send up the *Wicker Man *shtick.

Wow, sad to hear this.

My dad and I watched the Equalizer for along time.

I’ve never seen The Equalizer. My first thought was Breaker Morant, followed by A Christmas Carol and The Wicker Man.

Same here. His ‘ghost of Christmas present’ was terrific. For any not familiar with the role, it was in the George C. Scott version of A Christmas Carol.

Feel free to use it.

Ogspeed Mr Woodward. You were a class act, even if I never could say your name without getting my tongue tied.

When I was a little kid I used to love the Equalizer–or rather, I loved the music, and that nifty looking guy with the keen British accent. I’d go to sleep watching it every… Wednesday? Whenever it was on, anyway.

Of course, the real question is, why does he have four Ds in his name?

Cheers, Equalizer, and thanks for helping me sleep as a kid.

I don’t know why, but even though I loved the Equalizer, my first reaction upon hearing his death was thinking of a silly line from an old Benny Hill episode. Benny was playing a tour guide (I think) at a TV studio, and when asked who his favorite actor would be, he claimed, “Edward Woodward would.”

If we don’t do something about this, we’ll be up to our balls in crusty jugglers!

I loved him in Hot Fuzz and The Wicker Man. RIP.

From *Equalizer *to fertilizer. RIP.