So, I was meandering around the webs today and came across a posting from the historical society in my small town place of birth in Michigan. They had recently done a docent tour of the town cemetery, telling the histories of some past notables buried there. The post listed a bunch of the names and, not being young myself, I noted to myself the ones I had known in real life. One name caught my eye as she had been a youth pastor when I was a child, and had presided over the funerals of my family members up until rather recently. When I would travel back to my birthplace for the inevitable internment of Gpa or Gma or Mom, I would enjoy catching up with her and appreciating that she was still at it into advanced age.

Digging further to find out exactly when she had passed, I came upon her obit online. She had made it to 103, and her husband to 98. Bravo for them! But what jumped out to me was that the both had been listed as passing at a home in Oregon, where they had moved a few years before. I am assuming they went there to be near younger family. Doing the math, it appears they made the move when he was 96, and she was 99.

This brought to mind the story of my own uncle, my Grandfather’s brother. After his wife passed, he eventually met someone new, and moved from Michigan to Texas to be with her. He was 94 at the time.

So, as I mentioned, I’m not as young as I used to be but I’m still bopping along. But I fully expect that if I make it to 94 or 99 it is likely that I will have trouble making it across the room, let alone moving across the country!!

I’m not suggesting that anyone shouldn’t do whatever they want or are capable of at any advanced age, I’m just awed.

Anybody else have stories of people they know/know making big moves in advanced age?

My late mom in her early to mid-70s sold the (rural/suburban) house, sold the car, moved 350 miles to the (fairly) big city to the rented apartment where she enjoyed the last 15+ years of her life, riding the bus and feeding the neighbors and puttering around.

All of those situations are are very different from moving to your own apartment in the new place, even if it is near your children. I’ve known people who did that in their 70s, but no one who did that past 80 - I have to assume that those who moved when they were over 80 didn’t really want to move but felt forced to by circumstances ( either financial or health)

My Grandmother took her first ever plane ride to travel from Idaho to Maine to visit my sister.
Gramma was in her early 90’s. Apparently, thats an unheard of thing in New England, the airport staff at that end was flabbergasted (or acted like it anyway)that she was able to travel at such an advanced age.

Not a long distance, but a significant one. Last year, one of my aunts moved from her house into a nursing home, where she died of Covid at the age of 101. She had lived in the same house since she was married in the '40s.

The couple we bought our house from were 87 and 81 when they moved (after living here 29 years) to Florida. I believe their son and daughter drove them to their new home. She died about 9 years later, and he died 2 years after that. Both were brought back to this county to be buried.

Um (reviewing OP), you are not going to get any objection out of me!

I have friends who decided to pack up and move from Phoenix to Mexico (San Miguel de Allende) when they were in their 90’s. They lived there for 5-6 years, then decided that they wanted to move back to be closer to their son, so they moved to Woodstock, NY.

Good grief, no. That’s why God invented Google. How do you suppose He keeps track of everything?

Re the thread topic: I moved my mother (of blessed memory) from San Diego to assisted living here in San Antonio in June 2016. She was 92. Her first airplane flight. She was reluctant and said she thought we would drive. Gee… four days in a car v. two hours in the air? 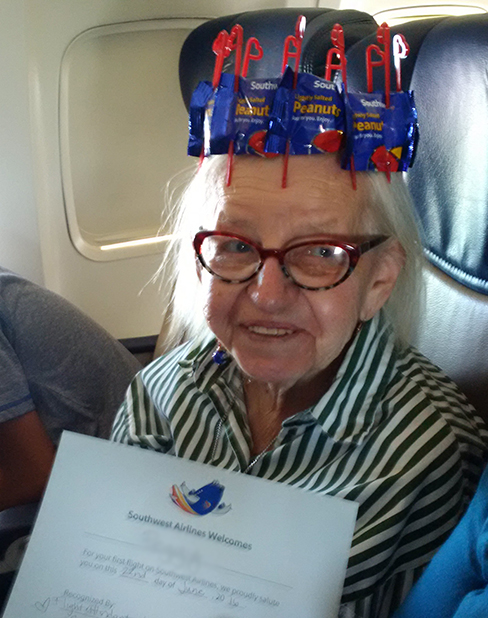 As you can see the flight attendants got into the spirit of the thing with a “crown” made of peanut packages stitched together with swizzle sticks. She wasn’t used to having such a fuss made over her and got a kick out of it. Once in her new digs, she eventually ate her way through all those peanuts.

Two years ago, at the age of 82, I moved two miles from a house to a condo. I do not see why a move of 2 miles was any easier than one of 2000 miles. Yes, I did move a couple of things (stereo, computers) that could not have moved myself, but that was really minor. Moving is hell, but the distance is not significant. Even the car can be put into a moving van.

As far as logistics, go, okay. But the thing about moving long distances (which I did multiple times as an Air Force brat) is that when you get to the new place, even if the inside of your house is full of your familiar stuff, nothing outside is familiar. Your friends aren’t there, the location/neighborhood is different, for a kid, the school is different–textbooks, customs, culture, cues.

For an adult and especially an old person (like myself, though not as old as you

) the coffee shop where they know you, the hairdresser, the dry cleaners, the grocery store, the house of worship (if you’re into that), the weather, even the water can taste different. For some people, this would be a welcome change-- the often-touted “fresh start,” but for some, it’s disorienting, and well, sad.

Moving two blocks wouldn’t have that effect IMHO. But the thread is about moving long distances.