Courtesy of @JohnT, there is a statement on Twitter purported to be issued by Trump stating his residence is being searched by the FBI: 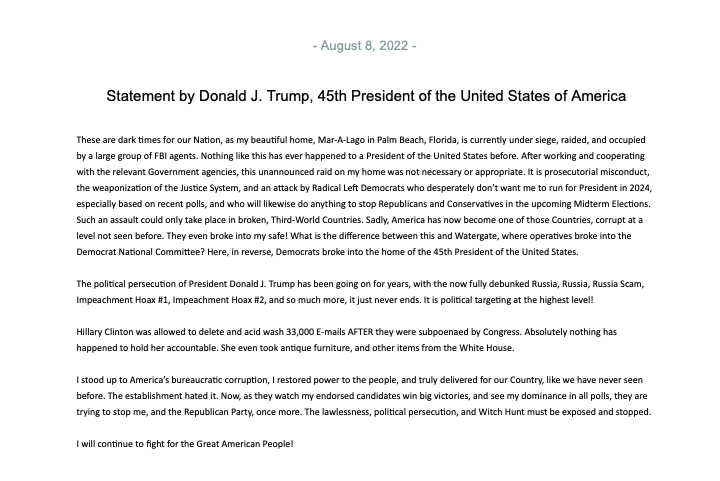 This is huge. I note he was treated exactly the same as any other target of a warrant. Personally, I’m so glad to see it.

The only surprise to me is that it has happened so soon.

I believe popcorn is in order.

The press release-ish sort of thing really has him playing the victim.

I did not see that coming.

Maybe they’re all figuring that they can sell some footage to the news?

I feel for the plumbers.

Do we know if he’s there at Mar a Lago?

A tip for Donald: maybe comparing yourself to Watergate isn’t the best idea, even with the ol’ “reverse vampire” trick.

How long do you think it will be until DeSantis starts posturing?

Why would he shy away from comparing himself to Watergate? After all, he wanted people to be loyal to him like the Nazis were to Hitler.

Is it really a raid or was it two agents asking him uncomfortable questions?

On MSNBC they just said he’s at Bedminster, and that Mar-A-Lago is pretty much a ghost town in the summer.

Is it really a raid

The statement Trump issued complains that they even broke into his safe.

How long do you think it will be until DeSantis starts posturing?

Is it really a raid or was it two agents asking him uncomfortable questions?

It’s really a raid. Trump is not at present being questioned.

The statement Trump issued complains that they even broke into his safe.

I confess, I laughed.

I’m also curious about Trump’s fairly relaxed and (for him) straightforward response to the issue.

Con artists are famous for loving to see just how far they can go with their cons and, the more someone pokes at their story, the more they like to double-down on the story that they’ve been spinning. So that could be all that this is.

But this doesn’t sound like Trump and it lacks proper panache and his flavor of craziness. I read that to say that he told someone to put out a message because he’s too busy working on something else. What’s the something else?

I’m still, ultimately, betting on him trying to flee the country to Turkey.

Apparently this has to do with those 15 boxes of classified records that the National Archives wants back. I thought all that stuff had already been confiscated and returned. Dammit, I want them seizing computers and phones!

Trump is in nyc according to reports.

This is crazy, there are so many things this could be about.

I may get snacks and dance with cats.

I’m hoping that the judge will be a trump appointee.