Have you seen a hamburger griddle like this before?

Around 1970 my great Aunt had a large hamburger griddle that fit over her gas stove’s burner.

It had to be at least 10 or maybe 12 inches square. Six patties fit on it. There was a groove along the edges that channeled the grease into a reservoir. She always bought the cheapest meat and a lot of fat cooked out. The reservoir could overflow cooking 6 patties. We used a teaspoon to spoon out the fat into a grease jar.

I have looked everywhere and never seen anything like this sold. It was so convenient and easy to cook burgers for a crowd. I really wanted to get my aunt’s griddle but she had already gotten rid of it when I asked.

My aunt had a metal burger press. She’d buy the 3 lb economy packs of meat. Spend half an hour pressing patties and putting them on wax paper. We’d take them out of the freezer and put them right on that hot griddle. Great memories.

There were always a lot of kids at her house and we loved her burgers.

This is the closest I’ve seen. But this one doesn’t have the groove and reservoir to collect the grease. Six burgers puts out a lot of grease.

My aunt’s was smooth and flat. No lip like this one has.

I searched on “stovetop griddle” and it turned up a number of models sold at Target and similar places. Most of them cover two burners, though, not one.

I had a cast-iron one for a while, back when I had a gas stove. I didn’t really like it all that much. It was heavy and much harder to clean than my electric skillet.

Aside from that it’s heated over the stove instead of electrically, it sounds just like a George Foreman grill to me.

Yes, it was similar. Actually quite healthy for 1970. Nearly all the fat drained away.

This one is close. Has a grease reservoir. Would be heavy.
http://m.ebay.com/itm/Cast-Iron-Griller-Nonstick-Surface-Stovetop-Oven-Cooker-Safe-Reversible-Griddle-/282020683959?nav=SEARCH

Pretty sure my aunt griddle was aluminium. I’ve about given up on finding exactly what she had.

I used to own one where the surface was round, so the fat would drip down into a channel around its edge, but I got rid of it when I got a glass cooktop (smooth surface) stove as the grill surface doesn’t get close enough to the heating element.

I bet that cooks great steaks. That heavy steel would really hold the heat.

This one is half the price.

That’s very, very close. Totally flat. Same grooves on the side. The reservoir is shallower but otherwise this is it.

Too bad. It’s a one of a kind vintage item.

I have this one: 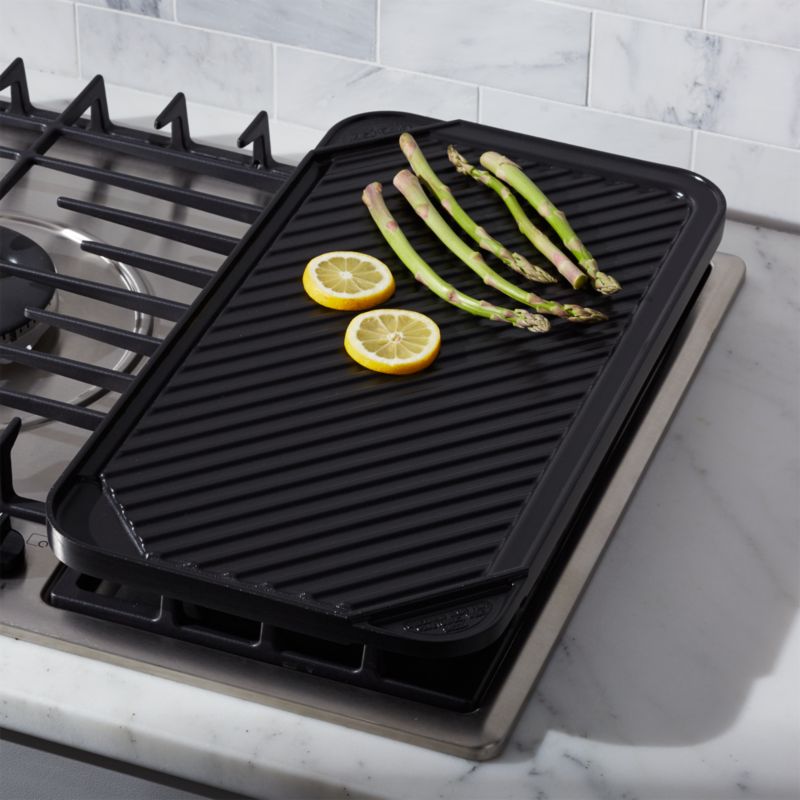 I have this one:

enalzi do you cook steaks on yours? Thin, boneless ones, like ribeyes.

We like hamburger steak too. Get a premium ground meat, finely chopped onion, salt, pepper. Don’t need a bun.

BTW, Our stove (three years old) came with one as an accessory. I use it to make pancakes and omelettes and grilled cheese sandwiches on weekends.

I use this Lodge Reversible Cast Iron Griddle when I need the extra space and it’s raining or too darn cold to fire up the grill. Now that it is just my wife and I, it doesn’t see as much use.

Our stove (three years old) came with one as an accessory. I use it to make pancakes and omelettes and grilled cheese sandwiches on weekends.

I bet that cooks great steaks. That heavy steel would really hold the heat.

You might get more variety if you also search on “grill pan” or “flat top”.

Eta: oh, yeah. Le Creuset are pots and pans you hand down to your children.

This one is half the price.

I have the Lodge one and like it, although I paid around $20 at the Lodge factory store a couple of hours from my home two years ago. It’s lighter and easier to clean than the old two burner one that I used to take camping (the niece has that one now).

About once a year I go down to the outlet and spend my “allowance” on cast iron, grill and barbeque tools.

I have a two-burner cast iron griddle, but I don’t know the brand. I never figured out how to season it. I mean, I can season it; but the seasoning gets burnt off on the burner side. I never use it because, as you say, it’s heavy. If I do start using it again, I think I’ll just use the flat side so it gets nice and click. I tend to cook the steaks in a cast-iron frying pan or, recently, the gas grill.

I use this Lodge Reversible Cast Iron Griddle when I need the extra space and it’s raining or too darn cold to fire up the grill.

I have the same one. It is a serious chunk of metal and a good alternative to the outdoor grill. It’s large enough I can cook a few burgers on one end and my wife’s vegetarian stuff on the other end and not have her freak out about me “contaminating” her Boca burger.