How do you play Diablo 2?

I’m thinking about loading it up again, but I’m definitely sure that I am completely and utterly bored with my old way of playing. Can you suggest to me something that would be interesting?

Here’s what I used to do:

Suggestions? What do you do (did do) that was (is still) fun?

Well, let’s see… The max damage output I’ve ever seen was something like 60,000 average per hit, at five swings per second. That was an interesting build, but rather a glass cannon: No matter what we geared her up with, she still took hits like a sorceress.

Once we built a character who maxed out run/walk to the point that he could cross ground faster than a teleporting sorceress. It worked out pretty well for Countess runs.

I’ve heard of folks who solo the Über-Tristram quest. The build itself isn’t too complicated (hammerdin with a touch of Smite), but actually doing it would probably be exciting.

You didn’t mention necromancers at all. The usual build is summoning a ton of skeletons, and then Corpse Exploding once you have a full army (which is easily a hardcore-capable build), but I’m currently running a poison nova necro, which is a bit on the slow side, but still doable.

Enchantress can be a viable build, especially if you’re in a group. Put buffing gear on one tab, and then a Demon Machine (or Kuko Shakaku or Raven Claw, but Demon Machine is the best option) on the other tab: The explosion carries all of your fire damage, so it’s sort of like a Fireball, but you finish the build 20 skill points earlier (leaving room for some Frozen Orb), and you can enchant your merc and allies and allies’ mercs and minions, too.

One of the more fun builds I’ve done is a throwing-star assassin. Get yourself a big, slow but high damage weapon like a hammer or axe, preferably ethereal (since Blade Fury doesn’t use durability, and ignores weapon speed), then use Death Sentry to clean up after you’ve killed the first thing.

For barbarian builds, the usual choice nowadays is Concentration, since all barbs want to max out Battle Orders, and it’s a synergy. I’m not big on it myself, but then, I’m not a fan of melee to begin with.

I thought you meant Meridian for some reason, but still found it. 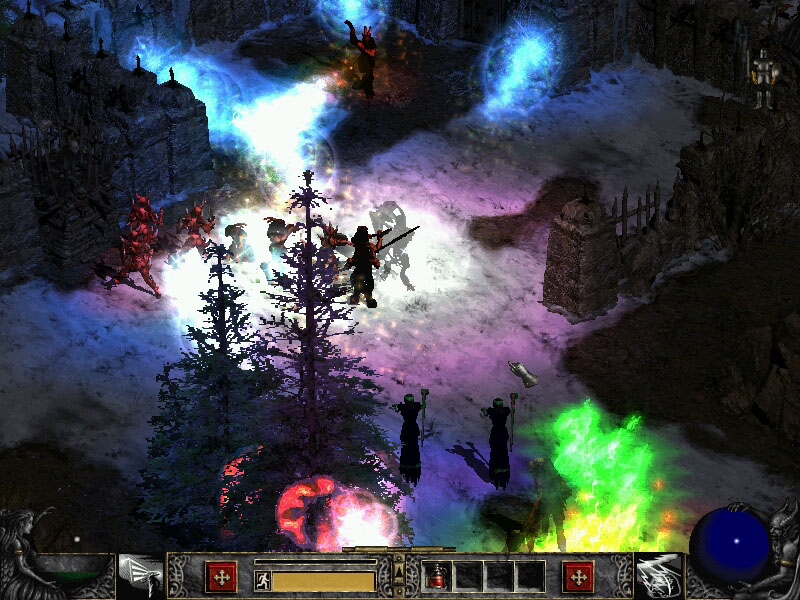 If you’re in a Diablo II mood but want to try something a bit different, you could give Titan Quest a try. Graphically superior, gameplay pretty much about the same, different setting. There’s a free demo on Steam, and both the original and its expansion are $19.99.

I really liked a charged bolt sorceress. Max CB, then invest in synergies. Barring lightning immunes, nothing stands in the way of your Crawling Electric Death Carpet. Bwa ha ha!

The problem I always had with charged bolt is that I’ve learned to associate that sound with Lightning Enchanted monsters, and instinctively start trying to hide from the bolts. Heck, with my current necro, I still cringe whenever I myself cast Iron Maiden, for the same reason.

I’ve heard of folks who solo the Über-Tristram quest. The build itself isn’t too complicated (hammerdin with a touch of Smite), but actually doing it would probably be exciting.

You don’t need a specific build for this, nearly any paladin can do it. All you need is good resists, 1 point in smite, an item with crushing blow & open wounds, and an item that casts life tap on attack.

One of the more fun builds I’ve done is a throwing-star assassin. Get yourself a big, slow but high damage weapon like a hammer or axe, preferably ethereal (since Blade Fury doesn’t use durability, and ignores weapon speed), then use Death Sentry to clean up after you’ve killed the first thing.

I tried this once. Great fun. Obedience is the perfect weapon for it. 370% ed in an eth polearm is insane and it’s quite cheap too. Highest rune in it is a fal. And if you grow tired of the character it makes a great merc weapon for a different character.

Well, let’s see… The max damage output I’ve ever seen was something like 60,000 average per hit, at five swings per second. That was an interesting build, but rather a glass cannon: No matter what we geared her up with, she still took hits like a sorceress.

The melee sorc with Beast? I thought she was pretty tough in wereform, but that build was pretty expensive.

I tried this once. Great fun. Obedience is the perfect weapon for it. 370% ed in an eth polearm is insane and it’s quite cheap too.

I’ve heard that there are some quirks which contraindicate using a two-handed weapon for Blade Fury, but I’ve never actually confirmed or denied them.

And for soloing the whole Tristram quest, you really need some way to deal with crowds, too. I’m not talking just Tristram itself, but the three other portal areas where you find Lilith et al.

I’d settle for just knowing how to play Diablo II in general–I have a lv92 Iron Barbarian with full Immortal King set and a bunch of other sweet stuff, and somehow I have never seen a single SOJ in all my playtime–granted that I never played Battle.net because I hate other people and four-person with local friends was all I needed.

Legitimate Stones of Jordan are pretty rare. The only reason they’re so commonly available for trade is that way, way back in the day, duping was so easy that people were doing it accidentally, and the SoJ is the only item from back in those days that’s still worth using.

just run around clicking and you’ll do well.

For the uninitiated, hardcore means - one death is all you get. When you die, that’s it. Character is gone forever. As well as any loot that character was carrying or had in his/her stash.

I haven’t logged in for maybe 6 months, but there are two ways to activate Hardcore. 1) Finish one game, normal difficulty, normal Baal (or Diablo if you’re running classic) and Hardcore will be unlocked. 2) Make a very simple registry change in Windows (I’d have to google the reg key, but there’s a DII reg key that is something like “Hardcore (YES/NO)”

I bought DII on release and played for about 3 months. Got terribly bored - to me, killing endless swarms of mobs just to get the occasional shiny loot got boring fast. DII in normal mode to me is like playing a slot machine - boring.

I came back about a year later and decided to try hardcore. It completely changed the game for me. Suddenly, there is a sense of risk and danger. Builds change, sometimes significantly. Example (from back in the day) - “glass cannon” sorcys were tops when I started hardcore (back in 2000). In hardcore, they simply weren’t that viable - suddenly you needed to plan how to survive, not just smite without fear of loss.

I got a real sense of accomplishment with each death. I think my first HC char made it to 30 or so. Next got to maybe 40. Every time, I had muled some decent gear so I was never starting from scratch. It became a challenge - how far can I get?

I still have yet to complete my initial stated challenge - finish Hell with a HC char. I’ve gotten kind of close, but man, things get dangerous, especially solo (how I usually play.)

Heck, completing Hell with any solo character is tough. Every character has some parts of the game that are killer, but which some other character would find easy.

I like to play quaint characters. Back in the days of yore, I have played the Melee Sorcereress, relying on Enchant, Shivering Armour, Frost Nova and Static Field, plus whacking away with a two-handed sword.

When the Pierce skill allows Guided Arrow to ping-pong the same monster over and over again, I played the Arcane Archer. Armed with Skystrike, I can call down numerous (but in the end quite useless) meteors. Too bad Pierce was ‘fixed’ and I don’t get that much fun out from Arcane Archer again.

I’ve also tried a Singing Barbarian, and alas he fettered in Hell. Also on the list was the Assassin-throwing-discs thingy, because that skills take 33% of its damage from your main weapon, and it inherits some properties, such as leech life and mana. Also have tried a kickassin, and that was fun.

I have also tried the Wind Werewolf (forgot the official name). The premise is a Druid, shapeshifted into a werewolf, could still trigger x% to cast effects. There is an unique weapons which cause twister on hit, and it gains syngeries from your skill tree. So the idea is to equip that weapon, put points into twister, change to a wolf, maul away and see twisters coming out from your strikes. Cool stuff.

Responding to comments: I’ve done a PnB, skelly, and summoner necro. I took a poison build up to ~40 or so, but it’s just to slow. I can outrun the blast usually. For fun, I’ve done a maxxed out Corpse explosion build (much smaller radius than I thought, and the damage doesn’t scale up in multiplayer) and a typical hybrid with 1 point in every curse. I think the best was the PnB with ~10-20 points in the summoning skills, far more flexible than a pure summoner.

Update: I reloaded everything, but the latest patch appears to be screwed up (.12 i think.) I tried to set it up so that I don’t need the CD, but I think one of the mpq’s I copied became corrupted. I get crashes and glitches often.

It took a couple of hours to get a lightning sorc to baal, and so far I’ve started an HC summoner necro. I forgot how mindlessly boring act 1 and 2 and parts of 3 are when your skeletons get stupid and block each other in narrow passageways. I’ve been on /players 5 the entire way through except on bosses. I was worried about Duriel, but I somehow accidentally bought a wand with thorns, and I remembered an old post I read about how it owns duriel in normal. Somehow, I killed Andy with lvl 1 Teeth.

What’s the strongest HC build that is the least annoying? Imho, I think the skelly necro is nearly unkillable and perfect for non-mule builds, but he’s nearly unplayable in certain areas (act 2 caves, act 1 jails, etc.)

For solo HC play, I’d probably go with either a smite paladin (who survives due to high defense and max block) or a trap assassin (who survives by never seeing her victims face-to-face, but always hooking traps around a corner). Either one of them will eventually have problems with immunes, though, since they both focus on a single element. Hammerdins can make it through most of the game even in HC, because they’re just that good, but a hammerdin has no way whatsoever of making it through the Maggot Lair.

And what do you mean by “non-mule” builds? I wasn’t aware that mules had any build.

Bone necro can be great in HC. Just spam bone prison when you start a battle and then pepper away with teeth & spear. The prisons don’t live long on normal but become nearly unkillable in nightmare and hell.

It can be a little annoying to play since you’ll have to wait a few seconds after most battles for your prisons/walls to fall over but it’s less annoying than trying to get your summons through a piddly little door/pathway. Plus teeth look awesome when you’re throwing twenty of em per cast. And, of course, magic immunity is rare enough to never really be an issue.

heh, 2 seconds after Diablo appeared, he bone prisoned then killed me with pink lightning, no chance at all. I was even spamming my full rejuves, right after I died, my mana jumped to full.