It’s better than being an echo.

Good thing I have aloe on hand for that epic burn.

Actually, it should go: “…you make an ASS out of 'IM and you make MI LATE.”

Talk about a coincibump, @CaptMurdock, I just had a completely laughable FB interaction with the guy who was selling the bird picture above.

4, 5 days ago Greg somehow comes across me on FB, I guess he remembered our interaction, and… for whatever reason, because everything I do is public… he sends me a friend invitation.

I sit on it for a few hours, pretty sure I know what’s up - it came late at night, possibly alcohol involved, but the guy wants to debate politics. He could have just tagged me, again… everything is public… but sure, this is how he wants to roll.

So, what the hell, I accept.

And, as expected, instead of asking how I was doing, how Sophia was, etc, he immediately came at me with all the grace shown before:

What a dumb question. I’m not interested in getting in a predictable unthreaded conversation chain with this guy and his friends, one that goes like this:

(and, yes, there were plenty of low-wattage hanger-ons of his watching, and commenting on, this discussion.)

So I decided to take his question seriously, one professional to another (Greg is a Financial Representative with, I believe, his securities licenses (Series 7, 63, etc)), and I wrote a proper response which didn’t confine itself to the original question’s constraints.

If you don’t want to read the screenshots:

Biden is still working under Trump’s budgetary authority, with Trump’s Federal Reserve chair still in place, so that by a specific macroeconomic metric I’ve been tracking for 10 years, it’s obvious that Biden hasn’t really done much on a macro scale at this date to effect large-scale economic change. Also, pent up demand following its suppression during World War COVID is part and parcel of common post-war inflationary trends in history - we saw the same thing following the Civil War, WW1, and WW2.) 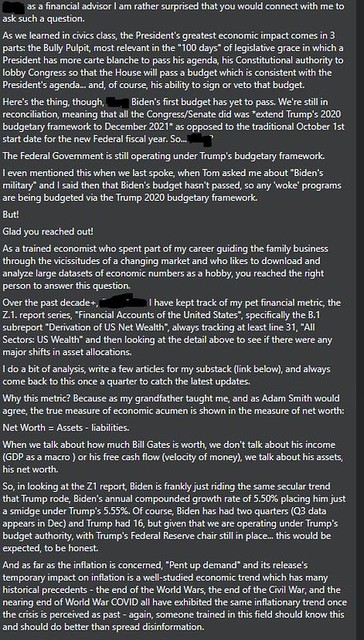 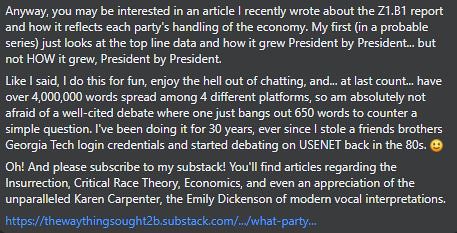 You can tell with that last that I was warning the guy. “I like telling you where you’re wrong. I’ve done it for longer than you’ve known there was an internet. I will bring more cites, more data, more analysis. I will make you work.”

Now… we’ve been debating on the internet for decades, most of us reading these words, and we know there are five response categories Greg gets to choose from:

Oh, wait. Had he done that I may not be typing this.

To be fair, I didn’t answer with a “7”. Perhaps I should have. But screw this guy. He sends me a ‘friend’ request on Facebook expecting to sandbag another libtard about a Biden question, asks me a question, and I gave him a serious answer.

Greg has learned that instead of getting into the plastic pool where one puts a toddler to splash around, he has jumped into the goddamned Marianas Trench. And I’m calling him out on this shit: 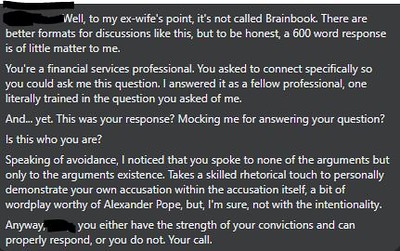 I write this thinking that Greg, of course, won’t accept the challenge. He’s a snowflake white male. He’s going to get offended. At something. I’m not too sure what, there were a couple of rhetorical blows in there, but if he wants to make his case against mine, go ahead.

But until then, I’m calling him out on his weak-assed response.

About a day later he comes back with, and I respond: 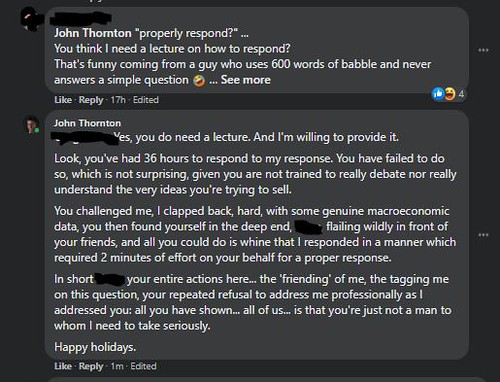 (the “see more” on his post hides his closing sentence: “You should go into politics!”)

With this, I unfriend the man… like I said, my shit is public, all he had to do was tag me on the question - knowledge of how Facebook works… like the macroeconomy… is apparently not one of Greg’s skill sets.

But, I’m human guys. I can’t help myself. I can be small as well. So I leave a cryptic message on my timeline and sign off, likely not returning until tomorrow night:

Happy Thanksgiving, everyone, and when you get into these political discussions, take a deep breath and Remember The Dope!

Greg has learned that instead of getting into the plastic pool where one puts a toddler to splash around, he has jumped into the goddamned Marianas Trench.

I was thinking he brought a knife to a gun fight. And you are casting pearls before swine!

I like how he started the convo literally making it a political discussion (“I assume you voted for Biden, if not, let me know”), and when I… with no trouble whatsoever… turned it into a macroeconomic response that literally gave Trump historical credit and said Biden is currently riding Trump’s coattails… he accuses me of bringing politics into the discussion!

I gave your boy a solid! What the fuck?

(below is the chart I uploaded on my first Facebook response. It’s a measure of how Presidents grew wealth for the country during their administrations, and I’m not interested in debating it in this thread, lol

The other president to have 666 in the amount is Nixon.

I remember one time the daily lottery numbers on 9/11 were 911. It was on the news with the caption “what are the odds?”

To which I couldn’t help but respond “uh, about one-in-a-thousand.”

Here’s one for you: count the letters in the name of our 40th president: Ronald. Wilson. Reagan.

So, what does any of this to do with toast? I like mine with lots of butter, sugar, and cinnamon.

I was thinking he brought a knife to a gun fight.

There’s a Britishism - strictly, a British version of this - which fits well here, better underscoring the unequal nature of the contest. Spoilered to protect those easily offended:

He brought a fart to a shitfight.

I guess it depends where you live, exactly. Most of the old white people I know of live in the suburbs or ex-urbs and were kids when white flight from the city took place. So in many cases they were raised to believe “people who don’t look like you are bad.”

I grew up in Alaska, where that attitude was prevalent. But, having my own mind, and the ability to think for myself, I was able to educate myself and reach my own conclusions about people. Sadly, a lot of people just believe what they are told without questioning it.

There’s a Britishism - strictly, a British version of this - which fits well here, better underscoring the unequal nature of the contest.

As usual, the Brits say it better! I’m going to incorporate this phrase into my vocabulary forthwith.

Greg has learned that instead of getting into the plastic pool where one puts a toddler to splash around, he has jumped into the goddamned Marianas Trench.

Really, this was too good a line for me not to put it on Facebook where Greg could see it. He responded to my last post above, as did a couple of his friends. I ignored Greg’s response, making sure not to click on it - I want it to go unread for the end of his days, if possible - but I did make sure to respond to another one of his friends: 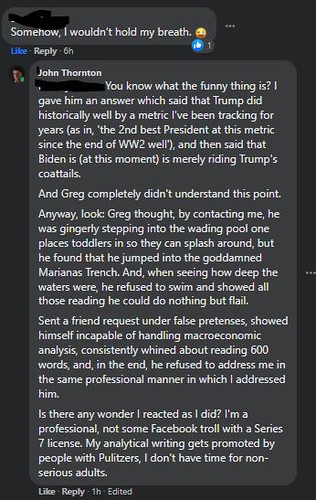 An update worth waiting for.