Is this the beginning of the end?

Here’s the thing: I genuinely believe that this “Let’s be tolerant of everyone and everything, no matter what” ideology is bad for our collective resilience broadly, and what particularly bothers me is the zealousness with which people campaign for it - there’s no room for discussion or disagreement, you’re either 100% on board with every aspect of it, or you’re an irredeemable villain.

That’s ridiculous. I don’t want to be tolerant of everyone and everything. For example, I think we are far too tolerant of racists, homophobes, transphobes, and nazis. You know - opinions people hold or things people do, rather than inherent aspects of what they are.

I appreciate you actually understanding where I’m coming from, and not just leaping into the name calling and thinking I’m some sort of horrible monster for - gasp - having a different opinion .

You have a “different opinion” about extending a tiny courtesy to a beleaguered minority that costs you literally nothing.

Second, it’s bad for our collective resilience? How so, and on what evidence?

I had a response partly typed out for this, but then @Miller - a mod, no less - came in and called me an asshole, so it’s pretty clear I’m wasting my time explaining my viewpoint because no-one genuinely wants to hear it, or if they do, it’s so they can call me an asshole for having it.

So, you want license to be a dick to other people, but fold up like a cheap card table when some is a dick back to you.

So, you want license to be a dick to other people, but fold up like a cheap card table when some is a dick back to you.

No, I want a licence to not participate in woke virtual signalling without being abused by people - including a mod - for having that opinion.

No, I want a licence to not participate in woke virtual signalling without being abused by people - including a mod - for having that opinion

How do you think it makes transgender people feel when you tell them they, by their very existence, and anyone who accepts them, makes “our culture less resilient”?

That’s a much bigger attack than “asshole”.

Martini is offering us a good view of the conservative mindset: Marginalized groups must receive his individual agreement for their right to exist. Meanwhile, his right to exist shall remain uninfringed.

I mean, this is some truly fascinating insight into Martini’s psychology:

Oh! We have to ask him for permission to change society! I don’t think that was made clear on S-434.d, rev 2, the Societal Changes Request Form.

Do you like it when huge, sweeping changes that directly affect you get made at your work without any consultation whatsoever?

So, in addition to society needing his permission, his employer does as well. I don’t know anything about his employer, but I’m pretty sure… unless Martini is a member of the Board or an Executive Officer… his company doesn’t ask his opinion on 99% of the things it does.

When called on this bullshit, he turns the tables, making it… of course… our fault.

I’m starting to remember why I stopped posting here for a long time.

I’ll give you the benefit of the doubt here and explain why the customs are changing so that more and more people show their pronouns.

To which our Master of the Universe responded:

Then, of course, he allows it’s not just about them. It’s about us as well. Kinda like that time that Bricker allowed that he almost voted for Trump because people on a message board were mean to him (Narrator: I firmly believe Bricker voted for Trump):

It’s virtue-signalling pandering to a tiny, tiny minority who basically didn’t exist in popular consciousness five years ago, and yet another thing for progressive people to beat everyone else over the head about.

I appreciate you actually understanding where I’m coming from, and not just leaping into the name calling and thinking I’m some sort of horrible monster for - gasp - having a different opinion .

Saying that society needs to ask your personal permission in order to change norms is, literally, not a “different opinion”. It’s rampant narcissism.

Yeah, I think we can all see pretty clearly how you ended up being “abused,” and it wasn’t just because you left the pronoun field blank in Outlook.

As for the rest, you posted in the Pit, snowflake. Put on your big boy pants, or go be an asshole in a forum where people aren’t allowed to point out the turd you just laid in the punch bowl.

Saying that society needs to ask your personal permission in order to change norms is, literally, not a “different opinion”, it’s rampant narcissism.

Exactly. It boggles my mind that @Martini_Enfield gets so butthurt about the word “asshole” while calling all trans people “weird” and “other”, and WORSE - using his assertion that they are “other” to justify treating them worse.

Do you have a license for that cross?

I like to think of the Dope as a (mostly) pleasant dinner party. We chat and laugh and break up into little clusters where we discuss our specific interests.

That’s how I would have described it when I joined more than 20 years ago, but now the closest analogy I can come up with is Monty Python’s Argument Clinic. It really feels like most of the people drawn to this board just enjoy arguing, and as much as we try to keep abuse confined to one room, nobody really seems to pay attention to the signs on the doors.

No, I want a licence to not participate in woke virtual signalling without being abused by people - including a mod - for having that opinion.

I have a hard time thinking of something more “virtue signalling” than refusing to mark your pronouns because you want to make a point about how society is too tolerant and that’s hurting resilience–and then coming onto a messageboard to tell everyone.

You’re being sanctimonious and petulant, all at the same time. Don’t be surprised when people aren’t gentle to you about it.

But, in all seriousness, that’s not really a fully accurate picture. There certainly is argument, but there is also plenty of just friendly discussion. Even among people with different views, there is often a congenial sharing of those views.

Aside: I wonder how the sketch would go if the person had been looking for the argument clinic, and ended up in the agreement clinic instead.

If you were to meet someone, talk to them, maybe become friends with them, then discover they are a member of this “weird or other” group, would you drop them like a hot potato?

Just something to think about.

Well, there are lots of people coming from the same place you’re coming from. Part of my job involves complaints of discrimination and harassment in an academic setting. As you can imagine, there’s a constant clash going on in that setting between what you’re calling zealousness for tolerance and what some people call academic freedom. Whether or not someone has to use pronouns, at what point, if any, misgendering becomes harassment, and to what extent an institution should say “you have to be actively on board with this or else,” are representative examples of what that clash looks like.

A thing that is also true is that a lot of people have a sort of mostly-benign bigotry against trans people. 20 years ago or so, I went to a meeting at my local very hippy, anti-hierarchical, progressive co-op market. I had very liberal politics but was a pretty sheltered, conservative, tentative person personality-wise. In other words, if I had gone home and taken an online quiz about how people should be treated, I would have endorsed very progressive, equal rights for all, very tolerant positions. At the beginning of the meeting, they asked everyone new “how do you identify?” And I said, “what?” And they said how do you identify, and then other new people identified how they identified. I became a little uncomfortable and defensive and like gestured at my face and body and said with a sort of ironic shake of my head “uh, I’m Jimmy, just like, straight cis man?” In other words, I responded like the answer to the question was obvious and there was no need to ask.

Nobody accused me of being bigoted or transphobic or a monster because of that response, so it took me a long time to realize that it was a bigoted answer. It was definitely not the most bigoted thing any of them had heard. But I might as well have told them all “I think trans people are weird,” because I made it clear that I did; they just chose to be cool about it. There was literally no reason, other than thinking that trans-ness wasn’t worthy of being elevated to being “equivalent” to my own gender identity, for me to not straightforwardly answer the question. Oh, I’m Jimmy, I’m a cis man, he/him is good; nice to meet you. My answer might have been something different, and you wouldn’t have known that, which is why you asked, so I’m telling you.

One piece of that experience was that they didn’t call me an asshole. I will certainly grant that I felt better about the situation because they didn’t. If we set that aside and just look at what I did, though, do you disagree with me that my response was based in bigotry? I’m not sure how many people in West Philly at the time were trans, or what you would call a “tiny, tiny minority,” but there were certainly trans people present in the room at the time.

I have some close friends who are trans women, they are great, funny, smart, and kind and some shitstain bigot is calling them “weird”.

Fuck you Martini. You make this board worse by your existence.

This isn’t virtue signaling. This is personal for me, not some abstract ideal. Not that you give a shit.

I think you’re trying to use “weird” and “other” as fact-based words, words that are exactly equivalent to “tiny minority.”

But they ain’t. Words have denotations and connotations, and if you ignore the latter, you’re ignoring the bulk of human communication–including the bulk of your own communication. “Weird” and “other” both have tremendously negative connotations, and describing people as “weird” or “other” describes them as members of an out-group, a group that’s not part of the tribe/nation/family, a group that’s less than the folks in the in-group, a group that deserves less respect, recognition, and rights.

Connotations are real and powerful. Ignoring them hurts your ability to communicate and understand others. 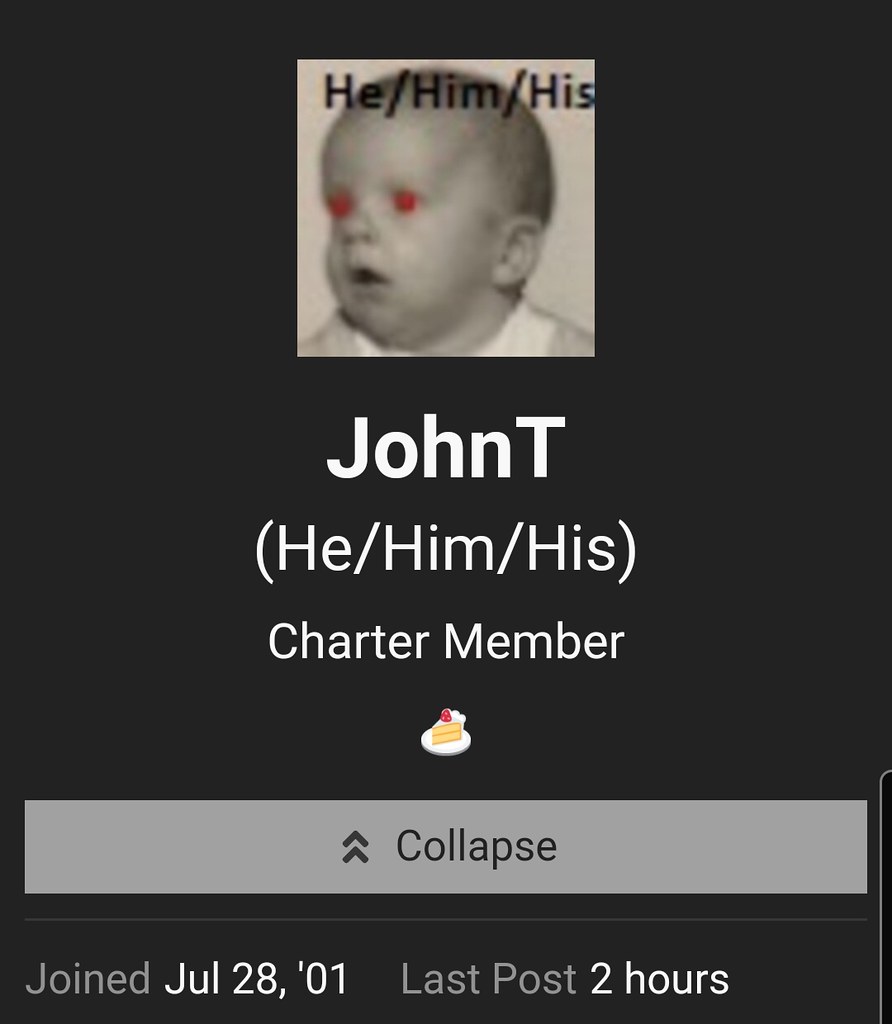 adding your genders to your e-mail signature

(This is the first time I’ve ever heard of this)

I do sometimes see two last names in an email, though. It seems to me it makes more sense to add Mr. or Ms. instead of pronouns, if there is room for confusion. I say this as someone whose name could be Maxwell or Maxine.