What sort of group or person do you think is likely behind the bombing?

My instinct is that it is the work of a white domestic terrorist similar to Timothy McVeigh and/or Eric Rudolph. It’s entirely baseless, but that’s just my hunch.

My first thought was that it was a Boston Tea Party tax day protest similar to Timothy McVeigh or Rudolph, but you never know. As the Onion said, it could be lots of people.

If I was a bettin’ man, which I’m not, and if I wanted to bet on who did this, which I dont, I would put my money on a right wing domestic terrorist. If it was RWDT vs. Somebody Else, I’d go with somebody else, but not by a big margin.

I don’t think it’s in the style of a left wing/eco terrorist. I’d buy into it being a Muslim terrorist, but the tax day symbolism is pushing me to a right winger. It could of course be a random attack from someone with a unique “reason” for doing this, and the marathon was simply a convenient highly visible choice.

It would seem that an organization like Al Quaida would be quick to claim responsibility if they had done this. With the recent mailing of ricin to a Louisiana pol, and now a suspicious envelope to the POTUS intercepted, this is sounding like a domestic asshole or assholes.

Al Qaeda and their ilk generally don’t pick dates with any historical significance in the West (see 9/11, 7/7, 2/26 WTC bombing, etc.) Based solely on that, I’m leaning toward domestic reactionary.

Not sure if “he” is a lone wolf or part of a small group. I would also suspect the possibility of former military experience, possibly Iraq/Afghanistan. The IED used was rather crude, probably due to lack of access to better materials.

If he doesn’t do this again, and keeps his mouth shut (not likely given typical bravado ego) he will never be caught. 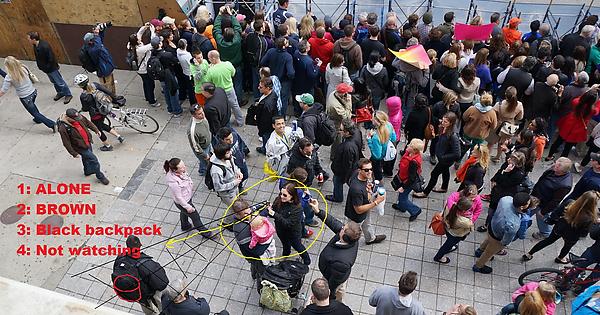 I don’t really care about their political affiliation.

Those are just pictures of people with backpacks.

Just to be clear, Richard Jewell has completely exonerated and was actually something of a hero.

But, if I were a betting man, I would also bet on a right-wing nut a la McVeigh.

We should know soon. CNN’s website has the “Breaking News” banner that a suspect has been identified.

Based on those photos, is there anyone at the race who DIDN’T have a suspicious backpack on and happen to be looking in the wrong direction?

You never know though. It could be some guy who didn’t qualify for the race, or somebody who thought Tweetied Bird told him to do it, or any number of other ‘reasons.’ One thing is for sure, when they catch him and you see his picture, you’ll think: what an insignificant little shit, this asshole caused all this misery?

You never know though. It could be some guy who didn’t qualify for the race,…

Damn you! I just popped back into thread to post that.

Yeah, it isn’t like there is going to be any reason that makes sense. It’s not like when they catch the guy and he issues his manifesto and we’ll all be, “ohh, well in that case, let him go, he makes a good point.”

Well, “American bombs killed my family” is slightly less ridiculous than “5’22” is a ridiculous qualifying time!"

Yeah, but neither is a good reason for blowing up an 8 year old kid.

CNN is announcing that they have a suspect and an arrest is imminent.

I don’t really care about their political affiliation.

Well, it makes a difference. I mean, if 9/11 had been pulled off by a bunch of Timothy McVeigh types, the history of the last twelve years would have ended up being a lot different.