Please help with this Woody Woodpecker (I think) quote

I am looking for the episode of (I think) Woody Woodpecker where a character, probably Wally Walrus says “Yumpin’ Yiminy…I take a good fall!” Or perhaps “I have a good fall.” It would be when the character is about to fall from a high drop.

I thought it might be Log Jammed, but I just watched and didn’t see it. It is possible it isn’t Wally Walrus, because I can hear it in my head very clearly, and a part of me says it doesn’t sound like Wally Walrus. But Yumpin’ Yiminy was his catch phrase. I suppose it is even possible it isn’t Woody Woodpecker, but I’m pretty sure it is.

Yumpin’ Yiminy is sort of a standard Comic Swede thing to say; I don’t recall Wally Walrus ever saying it which doesn’t mean he never did; he certainly had that 40s Yogi Yorgesson funny Scandanavian accent thing as the prime component of his personality. Are you sure this was even from a cartoon? In any case it must be pretty old, I can’t imagine anyone doing it in the last 50 years.

I remember “Yumpin Yiminy” from the Woody cartoons. I haven’t watched WWP in nearly forty years; so I can’t help the OP out.

He does say Yiminy a couple times in Ski For Two, but I just watched it and it’s not the whole line. I’m not sure, but he might say yiminy in every one of his appearances. I know I saw a few others where he said “Yumpin’ Yiminy” followed by something else. But not what I was looking for.

For some reason, I am picturing it being one of the “newer” Woodys. By that, I don’t mean the horrible Fox Kids reboot The New Woody Woodpecker Show. Just the later, more “refined” Woodys from the original run. Basically the Grace Stafford years. Except that by then, Wally Walrus wasn’t the main antagonist, so I may be wrong about that. But he was still in the occasional short after that. 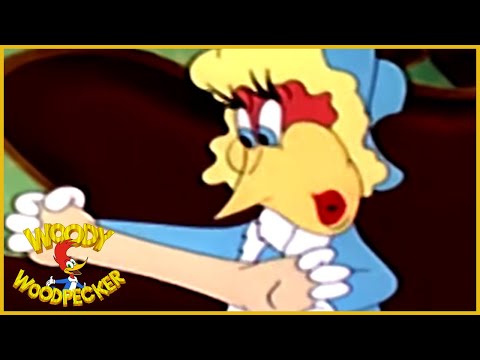 I remember it as “yeaping yiminy”, not “yumping yiminy”. I heard him say it a jillion times.