I have a game I like to play with my friends. It’s called “Trump, Carson, or Cruz.” 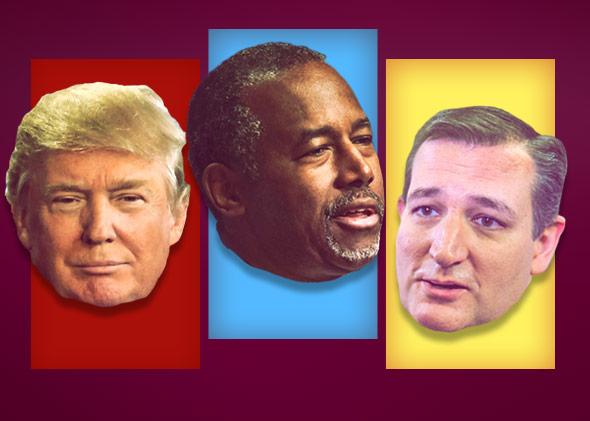 Pretend Trump, Carson, and Cruz Were Your Only Choices for President. Who...

I have a game I like to play with my friends. It’s called “Trump, Carson, or Cruz.”

It will be interesting to see how many people agree with the reasoning. I would pick Cruz, because I think he’s both principled and willing to learn. Trump is a demagogue, pure and simple. Carson is principled, but he doesn’t seem interested in learning a lot of the things he would need to learn to be a good president.

Trump. I have a feeling Carson actually believes the kool-aid he’s selling; of the three, he strikes me as the most delusional. Cruz scares me the most - I think he could do the most damage to the US in 4 or 8 years. Trump is, of course, godawful, but I could see him surrounding himself with at least marginally competent advisers, and not having much bite behind the bark.

I would pick Cruz, because I think he’s both principled and willing to learn.

True on the first, wrong on the second, and we usually call his kind of “principled” “fanatical”. Cruz is a true believer, someone who actually agrees with the nonsense most Republicans only use to get votes. His government shutdown bullshit alone proves that. He has no interest in governing, only in running an insurgency, and we can’t have an insurgent in the White House. The President needs to be able to negotiate and compromise.

Among the three, I’d pick Carson, because he seems the most tractable. He seems like someone who’d let the advisers do most of the work, which would likely be bad but not catastrophic.

Trump, same reasons as **Octrine. **I am also half-convinced all the shit he’s spouting is some sort of performance art, and once he gets the nomination he’s going to turn around and yell at everyone who embraced the crazy for being insane and anti-american. (Sure, I’m a delusional optimist, I know.)

Og… not sure I can even pick one of those. But, I don’t think the author of that article is correct in his assessment of Carson. He seems to think that Carson’s crazy statements reflect ignorance rather than malice and that he’s amenable to having his ignorance fought. I don’t believe that for a second. He seems immune to persuasion, and comfortably confident that he’s come to the right decision about everything.

Trump, for the same reasons as Octarine. I think Cruz might be a terrible human being, and Carson seems utterly immune to reason, and Trump might have a tenuous connection to reality. I don’t think Trump believes everything he says.

Trump’s terrible, of course, just the least terrible of these three.

Trump. He is a competent intelligent businessman. Neither Cruz nor Carson have any redeeming qualities. As a matter of fact I wish he was running as a Democrat and had never gone down the crazy path.

So, yes, I suppose Trump, but if those were the only three options I’d be seriously inclined to pick Option 4: assuming it wasn’t possible to leave the planet, I’d pick accommodations someplace deep underground in Australia with its own food, water, and air supply.

Carson, very reluctantly, because 1) he strikes me as basically honest, not-evil, and not a fascist in the making; and 2) more pragmatically, I think he’d be less likely to be re-elected than either of the other two, being neither an experienced politician nor a charismatic demagogue with an army of faithful supporters.

Trump’s ideas are by far the most terrifying and un-American of any of these three, but he’d also be the least successful in pushing them through even a Republican-majority Congress.

So, yes, I suppose Trump, but if those were the only three options I’d be seriously inclined to pick Option 4: assuming it wasn’t possible to leave the planet, I’d pick accommodations someplace deep underground in Australia with its own food, water, and air supply.

DT is essentially full of shit. He talks the talk and makes all sorts of threatening promises, few of which he would ever actually carry out. Or someone would block him, if it came to that.

Cruz is cunning and sneaky, a smarmy, oily, self-righteous bastard whose own family has to be coached to say nice things about him:

Watch the Most Deeply Uncomfortable Moments of the Ted Cruz Family Outtake...

Carson…Sigh. Delusional, ignorant, not very bright, and I’m not convinced he’s a real doctor. Also, his kids-with-brain-tumors analogy regarding war on ISIS is the worst attempt at an analogy I’ve ever heard:

Trump, the other two would be much much worse.

Trump only cares about Trump. He is a jerk and a blowhard. He’d be an embarrassment to us all. But he is not motivated by an honest intention to accomplish any agenda other than to service his ego. Carson has the most honest agenda of the three, and one that frightens me. Cruz may only be a bit less insincere and opportunistic than Trump but he is more committed to staying in character and following through. The damage that would be done by a President Cruz coupled with a GOP dominated congress would dwarf the harm that Trump would inflict.

Trump’s presidency would be far funnier than that of the others, and I often support the more entertaining candidate. Won’t always vote for them, but if I have to listen to someone for four years, I might as well enjoy it.

{…} Delusional, ignorant, not very bright, and I’m not convinced he’s a real doctor. {…}

Surgeon is to medicine as plumber is to architecture.

Not to disparage surgeons, but, “cut that, sew this” isn’t really that complicated.

Surgeon is to medicine as plumber is to architecture.

Not to disparage surgeons, but, “cut that, sew this” isn’t really that complicated.

You are grossly misinformed about the medical profession.

Beyond that, Carson is not just a run of the mill surgeon.

Trump’s ideas are by far the most terrifying and un-American of any of these three, but he’d also be the least successful in pushing them through even a Republican-majority Congress.

This is the right answer. No one likes or agrees with Trump in the Republican establishment. He couldn’t get enough support for any of his ideas to get them through congress we would essentially have 4 years of nothing but him trying things and being slapped down by Congress and the Supreme Court.

Cruz has a fair bit of support from the Tea Party and could find ways to make deals palatable to a majority. Carson is similar in that there are enough religious nutjobs that they could get stuff done.

Trump is only saying straight up what the rest of the GOP says with code words and dog whistles, he is not worse than them he just speaks more plainly. Edit: he also obviously means absolutely none of it.

Trump has said some super lib things, though he talks out of both sides of his mouth. At least he’s not a theocrat like the other two. Not seeing much of an argument. At least it’s not the “fuck, marry, kill” game.

I too would have to say Trump, but I’d be willing to let the office go vacant and see what happens.