The scales have fallen from my eyes. QAnon has shown me the light!

I had vaguely heard of QAnon before, but only today did I learn the details. :eek:

For those who have yet to be enlightened: apparently Mueller and Trump are working together to expose thousands of cannibalistic pedophiles hidden in plain sight (including Hillary Clinton and Tom Hanks) and then send them to Guantanamo Bay. Also, Hillary Clinton was arrested at 4:15 a.m. on Christmas, and executed by lethal injection on Feb. 28. Of course!

This theory is airtight, and explains everything. How could I have been so blind? It all makes sense now. 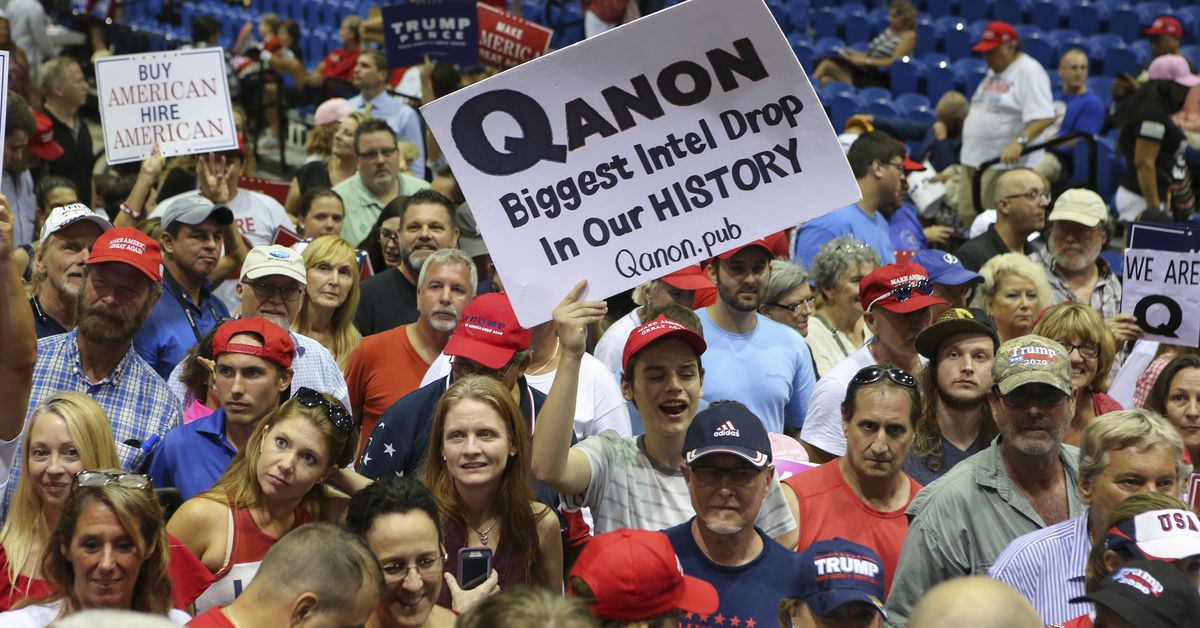 The Mueller investigation is over. QAnon, the conspiracy theory that grew...

Why a conspiracy theory with an expiration date will endure.

You’re late to the party, I’m afraid. We talked about this back when Roseanne Barr was fired from her show for tweeting something showing she is a QAnon conspiracy theorist.

A podcast I listen to called Reply All did a segment on a set of tweets of other QAnon conspiracists in response to what she did. Here’s a link to the episode, and here’s a link showing the tweets under discussion.

And it appears they’ve restored the transcript under the podcast, too–in case someone other than the OP would rather read it.

As I say, I’ve heard of this for some time, and knew it had something to do with child molesters (I guess in the wake of Pizzagate, this is just how right wing conspiracy nuts roll now?) and Trump playing 12th-dimensional chess. But today, a good friend ended an initially promising potential online romance because the woman with whom he was corresponding declared herself “a Qanon” (I guess that’s shorthand for “believer in the QAnon conspiracy theory”?) and he Googled the term and was horrified.

So I did some Googling myself after he told me about this, and the extent of the batshit craziness was still pretty shocking to me, even beyond Pizzagate. This makes that theory about Obama converting Walmarts into holding cells in advance of his imminent declaration of martial law look positively mundane.

Aside from the sheer lunacy of it all, there’s another aspect that I find especially disturbing, and which strikes me as a key difference from a lot of conspiracy theorists. They believe Hillary was secretly arrested and executed. They think there are plans to impose martial law and send thousands of American citizens to Guantanamo Bay. But they aren’t like “Wake up! We need to stop this skulduggery before it’s too late!” Oh no. They *celebrate *what they presumably understand(?) is (or rather, would be, if there were a shred of truth to any of it) a blatantly unconstitutional power play, because it’s happening on behalf of their Dear Leader. :smack:

Amusing video describing the phenomenon. It notes how out of the ordinary it is for conspiracy theories to take root among the “winners” of any conflict. And what with the Republicans having had a stranglehold on all branches of government when Qanon began, well, it is weird.
Most conspiracy theories are born out of a desire for the world to “make sense” and be “just”. 9/11 troofers exist because it’s easier for them to believe that there are hundreds if not thousands of shadowy operatives pulling strings everywhere and controlling everything than to believe that yeah, no, it’s that easy to kill thousands of people and it can happen more or less any time, for any reason. It’s comforting for them to know that someone, somewhere is in control, even if that someone is a Bond villain. “Crisis actors” is the same with school shootings - they’d rather invent that all of it is fake and made up to take away them thar guns than accept that somebody could shoot up their kid’s school tomorrow, for no reason, and nobody could stop it.
Q is the same shit, as applied to the Trump administration and/or the GOP. It’s about lifelong R voters and/or alt-right idjits who have listened to the promises of a con-man, put the GOP in control of every branch of the government, and still didn’t get what they were promised. And that makes no sense, right ? RIGHT ?! So, Q. The reason Trump does Trump things isn’t that he’s a con-man and a buffoon, it’s because he’s fighting the Deep State behind the scenes, is putting every Democrat on house arrest (which is why they’re still, you know, out there and speaking and shit - but they’re really arrested, you see ?) and so on and so forth. And the deeper you go down that rabbit hole, the more batshit it is, I swear to you. But that’s not the salient part. The salient part is : what do these people fear, and how much do they fear it that they’d rather cling to a theory that bonkers, that idiotic at every level, that ludicrous on its face. And it’s not just an American thing, or a dumb hick thing. It is an old people thing mostly, but not exclusively.
It’s a really fucking weird thing though, that’s for sure.

I thought I heard that QAnon was started by Left/liberal folks as a joke to troll Trump supporters. Providing more and more ridiculous bullshit to see just what the MAGA’s would swallow. Then it sort of took a life on it’s own when they believed the bull shit. I really don’t want to do any searches on QAnon at work, so can’t really back it up.

I don’t think anybody can say for sure who exactly is behind Q - it’s an anonymous 4chan poster who started streaming disjointed cryptic shit while claiming to be a member of the Trump administration. Which could really be anyone, up to and including a dog. But Qanon nutjobs have moved way past Q his or her or it or woofself and started making up their own dots to connect quite a while ago and seeing “signs” and “confirmation” everywhere.

I thought I heard that QAnon was started by Left/liberal folks as a joke to troll Trump supporters.

It is impossible to say, because the identity of “Q” has never been revealed.

This makes that theory about Obama converting Walmarts into holding cells in advance of his imminent declaration of martial law look positively mundane.

I learned from QAnon that Paul is dead. Spooky stuff!

The act of casting those ballots for Trump broke their brains.

(Almost literally: the doublethink required must have burned a hole in their neural circuits.)

A hat for them all.

This Hides My Lobotomy Scar Hat for $99

It’s definitely not unlike something he would do–except that he would have stepped forward by now.

I thought I heard that QAnon was started by Left/liberal folks as a joke to troll Trump supporters.

Swing and a miss; strike one.

Swing and a miss; strike one.

Did you restart the count five minutes ago or something?

At this point his team has been struck out for the entire season.

I agree Colbert is totally unfunny. I’m sure that people are leaving his show in droves due to the poor sense of humor. Oh, wait . . . He’s got 50% more viewers then the second most popular late show, huh, well, then I guess he must be pretty damn funny.

It is impossible to say, because the identity of “Q” has never been revealed.

And played him well.