My every-morning ritual is to have one cup of coffee and one slice of Whole Foods sourdough bread, toasted very very dark. My mother used to call almost-burned toast “healthy toast.”

I was thinking of starting a Marmite-Vegemite 2022 thread, because I still haven’t tried either of these substances and wanted some prompting. Then I watched a YouTube video about cooking with miso, and the presenter, who said she loves Marmite, told how she spreads miso on her toast and how that gives her a similar salty/savory hit. I do keep miso on hand, so I tried it on my toast yesterday and today. Just the merest barely-visible smear. My reaction was that I didn’t care all that much for it while I was eating it, but as soon as I finished, I was craving more.

This is the miso I used. It’s been in a glass jar in my refrigerator for at least five years. The label says it will keep indefinitely if refrigerated. 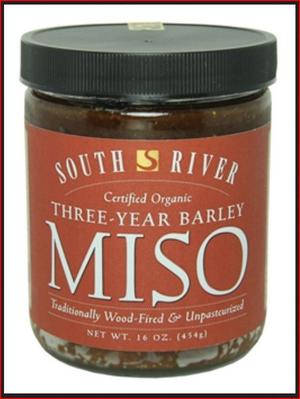 I think I will venture out to World Market very soon to buy Marmite. It’s time.

What are some other toast enhancements, common or uncommon, that you crave and recommend? Or hate and suggest we avoid?

One of my favorites, usually on a toasted half a bagel, but bread is fine too, is avocado smeared like butter and topped with grated cured egg yolk. I don’t always have those on hand, but when I do, I love using them for this.

I prefer Marmite over Vegemite.

For me a really decadent breakfast is buttered whole wheat toast sandwich with a modest coating of Marmite, topped with a slice of cheddar cheese and a sliced boiled egg. But be prepared for your urine to smell of Marmite for the rest of the day.

Nutritional yeast is a powder that can be sprinkled on toast or popcorn. It adds some unami to whatever it is sprinkled on.

A dark brown spread made from nori seaweed, flavored with soy sauce and mirin. (A little like Welsh laver except for the additional Japanese seasoning)

“Japanese Vegemite”, as I call it.

I love marmalade that’s tart and bitter. Homemade jam is second best. I’ll often spread a layer of soft cheese then the jam (most convenient is Laughing Cow cheese; I use half of one of those wedges).

Favorite marmalade is from Quince & Apple. They characterize it as “the lovechild of sweet and bitter.”

$10/jar on their web site, but $7-8ish in stores or here.
But it’s so good that I can use just a tiny bit to knock me over with happiness.

A dark brown spread made from nori seaweed, flavored with soy sauce and mirin. (A little like Welsh laver except for the additional Japanese seasoning)

“Japanese Vegemite”, as I call it.

Interesting… I LOVE the taste of nori.

Is it anything like furikake in a spreadable medium? 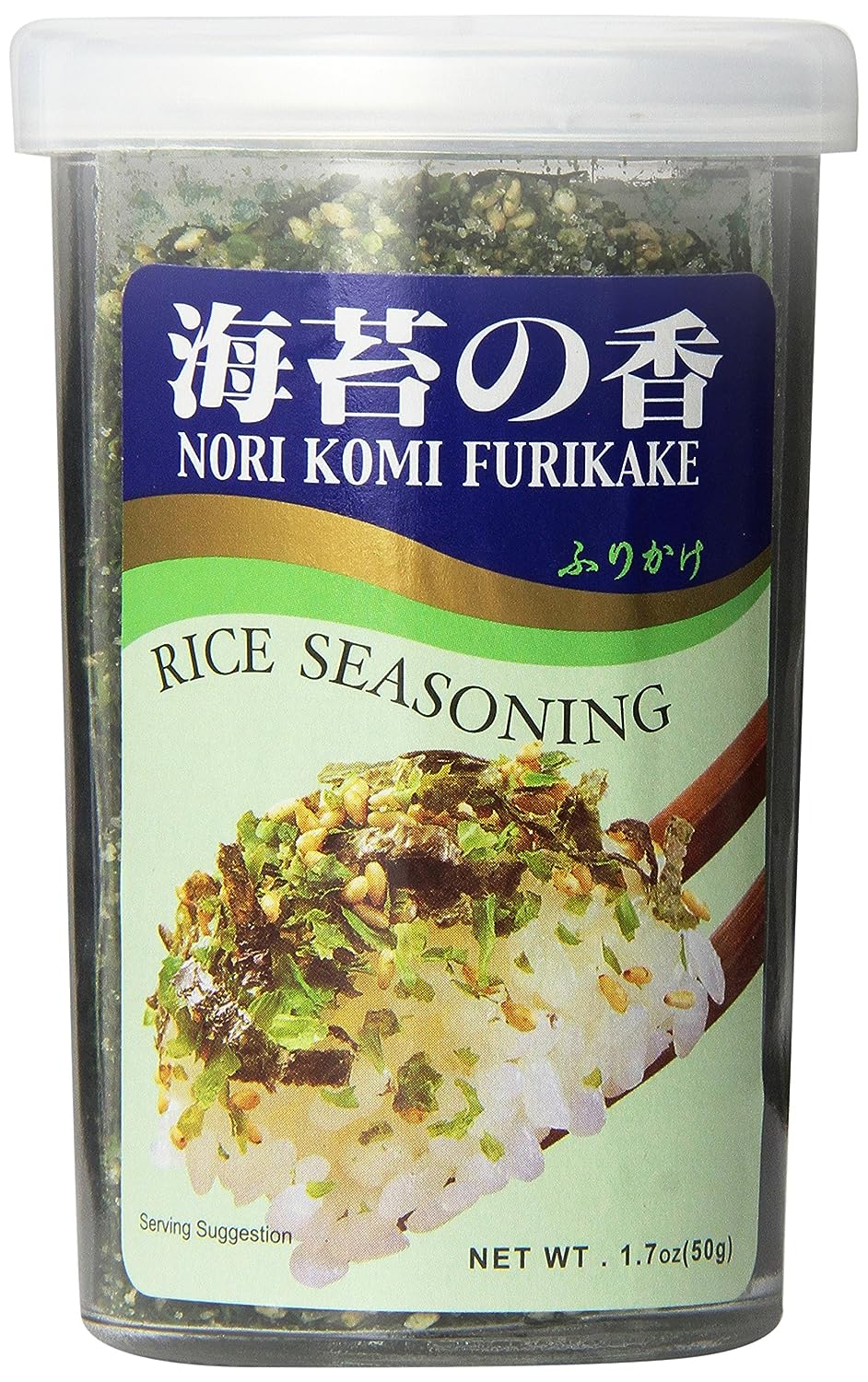 Confession: I’ve been known to go through a whole container of furikake, just sprinkling it in the palm of my hand and licking it up.

This is my disguise so you don’t know who’s confessing.

Furikake is generally any “rice sprinkles”. But most of them contain shreds of dried nori sheet, so you’re definitely getting some nori taste.

nori no tsukudani is both a little more intensely seaweedy flavored and more savory and umami, plus a pretty strong soy sauce note.

Ok. Here’s some at amazon. 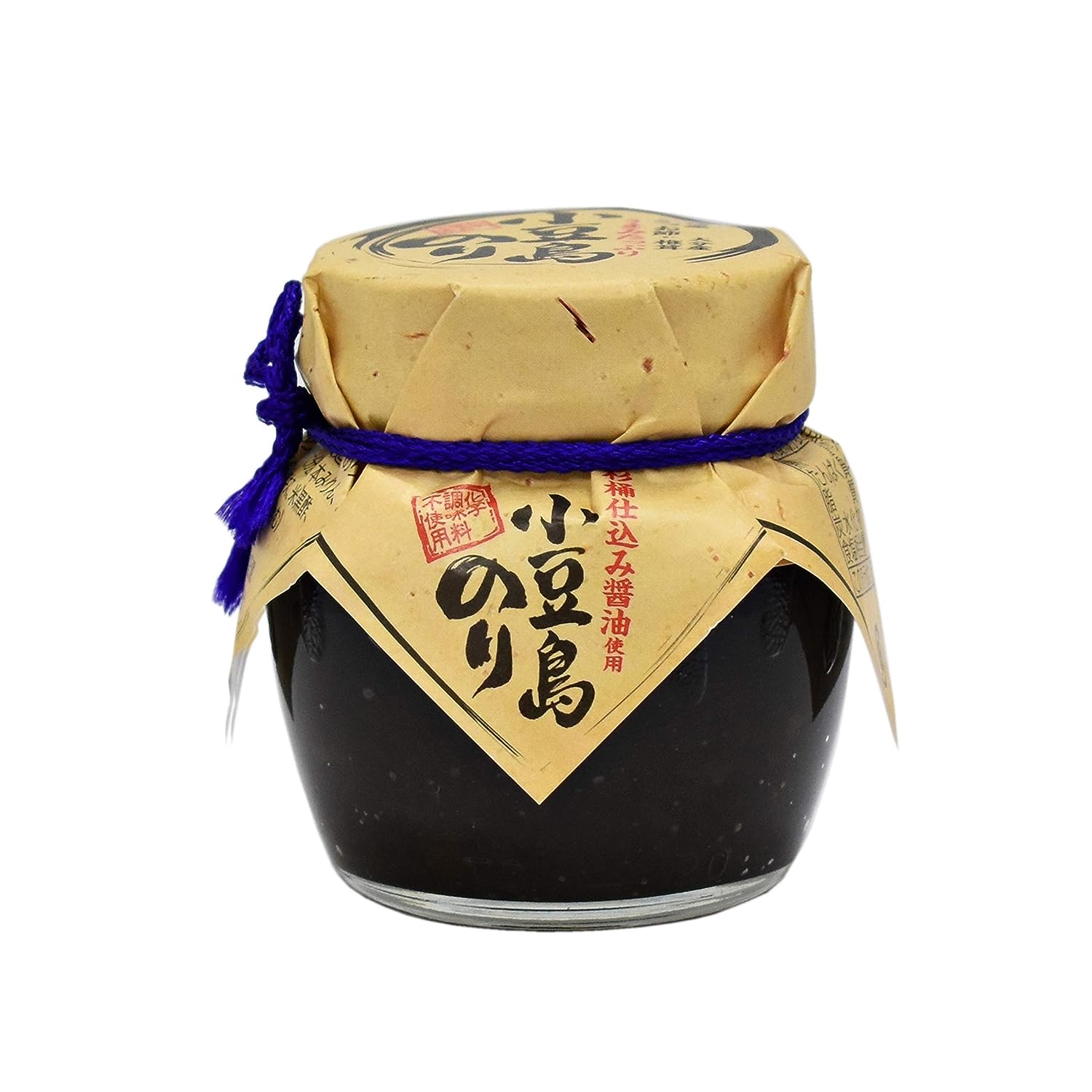 We have several Asian markets in town, one is specifically Japanese. I’ll bet I can find some there.

Another popular brand – my preference, since it’s what I grew up with – is Momoya Gohan Desuyo.

A jar of seasoned seaweed paste and soy sauce to be eaten with hot Japanese rice. A strong, salty, konbu flavour. Add to dishes to create a stronger seaweed taste.

I’ve routinely found this is Asian markets all over the little city I live in.

Wild Apple Jelly. Just any old apples plucked from any old tree in the neighborhood, or if you’re lucky enough–from a profoundly unknowable cultivar just out there in the woods.

I do love cenovis for its earthy, veggie medley taste. It reminds me what the bottom of the pan tasted like when my mom made yankee pot roast. YUM! Best just with butter and onion powder on an english muffin, toasted. That way the garden veggie flavor shines through.

Marmite is smooth and silky, love it with aged cheddar, egg, and butter also. I love combining it with a few other simple ingredients on a snack or sandwich.

NZ marmite is ok, but it’s my least favorite of them, as it seems more bitter than the others.

A little vegemite dissolved in hot water poured over the dog’s food ensures he will finish the meal in record time too.

Europeans like putting caviar on toast. At an Asian grocery, you can find various fish roes (intended for sushi) that are less expensive as the European stuff.

Good old cream cheese is great on toast. I hope it’s wheat or some manner of whole grain toast.

Buttered toasted bagels with a shmear of cream cheese and some strawberry jam.

Buttered toasted bagels with a shmear of cream cheese and some lox (smoked salmon).

Heh. I was just thinking about this this morning as I’m looking to expand my morning breakfast choices. This and the concurrent oatmeal substitute thread are quite timely.

Peanut butter has been my go-to toast accoutrement for years. However, in my quest to limit my carb intake I’ve warmed to the idea of using low-carb pita bread, cut in half and then divided again with a bit of peanut butter on one quarter and some cream cheese on the other. Add in half an avocado and a poached egg and I’m a happy guy.

I’ve never tried Marmite or Vegemite (would like to try both) but I do have an unopened package of miso that I picked up for a recipe that I never tried, maybe it’s time to give it a try.

A little vegemite dissolved in hot water poured over the dog’s food ensures he will finish the meal in record time too.

That’s good to know. Sweetie is currently off her food.

Another popular brand – my preference, since it’s what I grew up with – is Momoya Gohan Desuyo.

It’s it cheaper in stores than the $25 listed in Amazon?