Anyone here done the Tim-Tam Slam?

I was taught to do it by an Israeli. He called it the Tim-Tam Suck.

Sorry, can’t do a link: please Google or whatever.

Is this what you’re talking about? 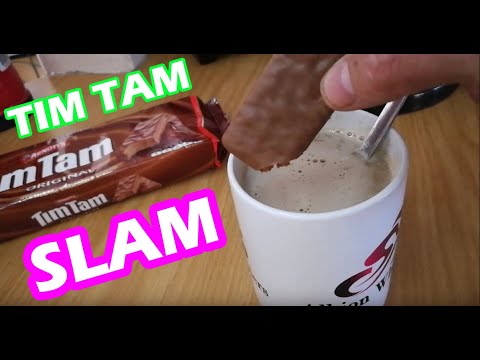 Didn’t watch the video above but IME the trick is to correctly gauge the moment the whole thing is about to disintegrate and to get it into your mouth before it ends up as a mushy mess at the bottom of your mug.

It’s messy fun but not a must-experience kind of thing.

TimTams were popular in Indonesia (the Wiki link notes that they are manufactured there) but in all the years I lived there I never bought one. Run-of-the-mill chocolate candy on sale in Jakarta tended to be pretty grim, so anyone with even mild pretensions to chocolate snobbery, including me, tended to avoid it. The “slam” looks like fun if you’re just looking for a sugary treat, though.

Here in the UK we substituted Penguin biscuits: they worked OK, but not as good as Tim-Tams.
Penguin (biscuit) - Wikipedia
From the wiki, I see that:

The Tim Tam, produced by Arnott’s in Australia and first sold in 1964, was based on the Penguin.[2] Occasional media references include tongue-in-cheek debates over which is the superior biscuit.[3][4]

And they have the advantage of a ‘joke’ on every wrapper:

What type of pasta do Penguins eat? Penguine

What do Penguins wear to the beach? Flipper-flops

P-p-p-pick up a penguin.

The most popular Israeli confection is supposedly the chocolate-coated fluffy-cream-covered biscuit:

One of the oddest things about the Tim Tam (note spelling), is that it is named after an American racehorse.

I’ve been doing this trick with my Oreos for years. It is sort of icky when it falls into the cup.

Don’t know if you guys get cream crackers in the US, but they are delicious eaten like this. The galette Cream crackers a is a flat, usually square, savoury biscuit. The name "cream crackers" refers to the method in which the mixture is creamed during manufacture. The cream cracker is traditionally prepared using fermented dough. They are made from wheat flour, vegetable oil and yeast, and are commonly served with cheese, corned beef or other savoury topping such as Marmite or Vegemite. They are also eaten with butter or margarine or without accompaniment. An average cream cracker co...

I’m having trouble envisioning a cream cracker being used as a straw. Are they significantly more tubular outside North America?

It was a standard silly messy thing to do in Australia when I was in my teens about 35-40 years ago, for me. It’s not really a practical thing but as Gyrate says, if you get the timing juuuust right you get an explosion of chocolate, coffee and coffee soaked biscuit (cookie) in your mouth as you pop it in.

More often though it ends up in a mess. But it’s the type of thing you do when joking around with your friends, and laughing at one another’s efforts is 3/4ths of the fun.

Don’t know if you guys get cream crackers in the US, but they are delicious eaten like this.

Huh? You can’t Tim Tam slam with a cream cracker.

nevermind, i didn’t watch the entire video before commenting; that’ll teach me!

I was told about it by an Aussie in the mid 2000s. Then he brought some in a few days later. I don’t remember how much of a mess I made trying it.

The most popular Israeli confection is supposedly the chocolate-coated fluffy-cream-covered biscuit:

A Teacake biscuit is 24g and is made of soft marshmallow on a biscuit base and is coated in both real milk and dark chocolate.

My friend Ofer didn’t go for those. He used to bring back some pretty amazing Israeli baklava, though.

“The cream cracker is traditionally prepared using fermented dough. They are made from wheat flour, vegetable oil and yeast, and are commonly served with cheese, corned beef or other savoury topping such as Marmite or Vegemite.”

“corned beef or other savoury topping such as Marmite or Vegemite” ??!!
Are you ‘avin’ a giraffe ?
Butter & Cheese.
Or just butter if you ain’t got cheese.