What If...? (Disney+ Series) [Open Spoilers After First Post]

Most importantly the Head of Lang (with cape!). I imagine the Widow will the one from the Ultronverse. And don’t forget all those Asgardians from the Crazy Hank episode. Heck, we could field a bunch of Captains’ Marvel. AND Thanos from the Star-Lord T’Challa ep. No Hulks to grab, interestingly enough.

I’m hoping we’ll see multiple Captains Marvel. It’d be cool to see a team of them.

I’m not convinced the one in the Ascended Ultron timeline was killed rather than knocked out for a week and now extremely pissed off.

I’m not convinced the one in the Ascended Ultron timeline was killed rather than knocked out for a week and now extremely pissed off.

Sure, surviving being at that core of a planet when it explodes is super easy, barely an inconvenience.

wild card Steve Rogers from a reality we haven’t seen.

Wasn’t he being sworn in as President in the first Universe the Watcher & Ultron burst into?

I think that’s just an Easter egg and I don’t expect we’ll see President Rogers in the If-vengers.

I vote for Captain Carter’s counterpart in the multiverse team-up - Old Man Rogers with a Cosmic Cube powered life support suit. Maybe 75 years of practice have made him real good at using the Cube.

…I understood that reference.

This is my second favorite episode after the Thor one.
My big question, though, is why that voice? The actor they chose was not a good fit (the acting was fine, but the voice was a constant distraction).

The Wikipedia page calls him Strange Supreme. Not sure if that’s canon though. Or whether guac is still extra.

…I understood that reference.

And I understood that one.

My big question, though, is why that voice? The actor they chose was not a good fit (the acting was fine, but the voice was a constant distraction).

I agree that Jeffrey Wright is not entirely selling it to me, but I’m not sure who a better fit for the Big Giant Head would be.

But can we at least acknowledge that this was a fun line? 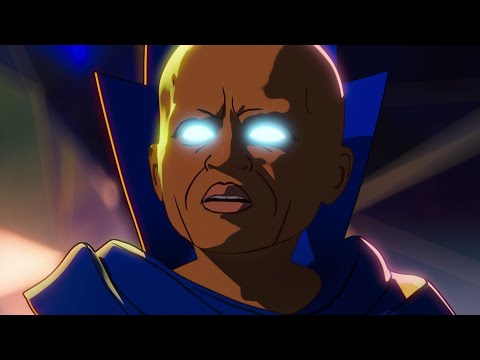 My big question, though, is why that voice? The actor they chose was not a good fit (the acting was fine, but the voice was a constant distraction).

Did you mean Ultron’s voice? If so, I agree that it wasn’t great. Trying to channel Spader is a losing task.

And let’s direct Zombie Wanda at Ultron. Sure it might just slow him down, but it would be fun.

Did you mean Ultron’s voice? If so, I agree that it wasn’t great.

It was a little jarring to see an animated version of Paul Bettany with a different voice. It wasn’t bad, just a bit disconcerting from time to time. It would have been the same if they had had Spader for the voice.

I wonder if somehow the Watcher will get the TVA involved.

I wonder if somehow the Watcher will get the TVA involved.

I was actually wondering how that all meshes up (if it does). (Spoilers for Loki, just in case)

In Loki, there is only one (‘sacred’) timeline, while here, there’s obviously more. So is this, umm, ‘after’ the events of Loki caused the splintering of the timeline? The events that originally led to the sacred timeline were basically a war of Kangs from different universes, whereas the current threat is multiversal Ultron (Multron?). So I guess what I’m saying is, is the TVA in this continuity the one with Kang the Conqueror at the top we briefly see after the end of Loki? Is there a new war of Kangs also raging through this multiverse? Is there even a TVA?

The Wikipedia page calls him Strange Supreme. Not sure if that’s canon though. Or whether guac is still extra.

Yeah, that’s kind of why I’m wondering if What If is going to flow back into the movies or not. The show could stand on its own. But they certainly could have it fit with everything else. I’m enjoying it either way.

At the risk of sounding argumentative, how do we know? We saw the Vision use it to completely disable the War Machine armor, with a stray blast, and he wasn’t even trying to hurt him.

Thanos is as invulnerable, if not more than The Hulk.*

Again, how do we know? We saw Thanos whip Hulk’s ass, but that doesn’t necessarily mean that he’s as resistant to injury, or that he can heal as quickly. Hell, we saw Thor give Hulk the blues in Ragnarok, and I’m positive that Thor’s not as invulnerable as Hulk… Plus, it’s not as if we’ve seen somebody with the reaction time of an android, that was built by an AI, attempt to slice Hulk down the middle, with what might be the most powerful laser in the universe, so what counterfactual can we fall back on?

I really enjoyed that episode, but I thought Thanos went down like a punk. He’s a planner and a schemer and I was not only surprised that he went down that easy but also that he didn’t plan ahead to try and avoid it.

For everyone speculating on a multiversal team of Avengers here’s a possible spoiler. And it wouldn’t be the first time something was spoiled for MCU audiences by a piece of merchandise. https://thedisinsider.com/2021/04/11/marvel-studios-what-if-teases-guardians-of-the-multiverse/

“All that for a drop of blood”

But to beee faiiiiirrrrrrr…Its not like even the MCU is particularly consistent…I cant really expect it from the current series.

Being consistent wouldn’t be canon.