Has anyone mentioned parenting? (I haven’t read the entire thread)

When I was a young, brand new Father at the tender age of 20, I was determined to be a stern and strict but loving authoritarian Father with lots of rules to make certain my Children Did Not Grow Up To Be Bums!

Now, looking back, I view that person as expending a lot of energy in rearing his kids in a less than optimal way.

I guess I don’t understand why we can no longer love our partners with the same openness and acceptance with which we’re encouraged to love our children and our pets.

Possibly because your partner isn’t mentally a quarter of your capability and totally dependent on you for food and their every need? I’ve found treating my partner the same as the rest of my friends except when we’re in the bedroom quite effective but totally different than my kids or pets.

Possibly because your partner isn’t mentally a quarter of your capability and totally dependent on you for food and their every need? I’ve found treating my partner the same as the rest of my friends except when we’re in the bedroom quite effective but totally different than my kids or pets.

No, that has nothing to do with it. I expect when you are family that you have loyalty to the family members. My mother has declined now and needs a lot of help, and she gets it. A few years ago she didn’t need it. My kids are growing and getting smarter, but whomever needs help gets it. Spouses who want to come and go as they please, they’re fuck buddies or FWB. That’s all.

Divorced me would still be happy to love a spouse that way. I’m not going to love that way one way, or marry one way. Needs to be two ways. I get that we as a society are happy to destroy people’s chances for this. I do not have blinders on about the world of 2021. Hence, my chances for getting what I want are very slim. I realize that now, not my goals and dreams of earlier.

I’m just not sure my approach to relationships is congruent any longer with the world I live in.

And you think you’re the only one who feels that way? Don’t you think it’s likely there are potential partners out there who share your beliefs?

Just to be clear, I’m not ridiculing you for feeling that way.

And you think you’re the only one who feels that way? Don’t you think it’s likely there are potential partners out there who share your beliefs?

Just to be clear, I’m not ridiculing you for feeling that way.

No, I am not the only one that feels this way. There are women out there with far worse situations than mine.

I know what I am like. If they are like me, they are likely hurt and suspicious of new situations. Also with baggage, aka kids, and less energy to start over, less ability to bond… all sorts of stuff.

Then there is the situation with my ex. My ex left me for another man whom she has married. This man does not have any children of his own. This is a far more promising relationship situation than my current situation. I have found that for most successful remarriages, it is a remarriage for only one of the partners. This is a good situation for my ex, that this guy will just come in and be willing to accept her kids. This is someone she knew before we ever met, so it’s not like it’s someone knew, like I might have to do. All of the major barriers to remarriage aren’t there for her, and the fact that I’m a good father and pay into that household with child support are just icing on the cake for her. She’s excellently situated for her future both financially and personally.

With me, the basis for going forward is not so good. I’m not going to put a woman before my children. Will not happen. Responsible on my part, and good for my kids, but that limits certain sorts of relationships. Financially, I am solvent, but I don’t have extra money to throw around that can be attractive or soften these sorts of situations.

There are many, many relationships that can be FAR worse for me going forward than being more cautious about them. Being a nice guy and loving is not going to keep me out of danger there. This is simply reality and the truth, and what I need to live by.

Yes, I realize that others out there had my experiences. But two damaged people can’t heal each other. My relationship skills were hurt by my experience in my marriage, not helped, because the base of trust is no longer there. I know that at some level it really doesn’t matter what I do. This is not really helpful to relationships, but it’s who I am, and frankly the best of the potential partners out there are just as damaged as I am.

That’s a lot of information and I don’t really know how to respond, if that’s what you wanted. All I can say is this:

My relationship skills were hurt by my experience in my marriage, not helped, because the base of trust is no longer there.

That happened to me. The circumstances were different, so I’m not saying “been there, done that,” but things get better after a few years. What helped me to get past the anger was to realize that at least half the blame was mine. I should have seen it coming. But love blinds people. Better said, some people are blinded by their perception of a relationship. So, I suggest your best chance of attracting a good, considerate person is to continue being one. Draw a line to keep others out, but don’t draw it across your heart.

Yes, I was sure that as soon as I entered high school I would have to struggle to avoid people who would constantly be pressuring me to take drugs or dosing me with illicit substances without my knowledge. Instead I’ve only been offered drugs once when I was in my mid 20’s, and it was basically “We’re all going to toke up, I don’t think you are into that sort of thing but I thought I’d ask in case you were.”

The other thing was crime in the big city. I assumed that if you walked around the city streets at night or ventured into a certain part of town you would get mugged guaranteed. But after living in the DC area of almost 30 years, my encounter with crime has been limited to having my lawn mower stolen, and my car broken into a couple of times.

Eating raw egg, especially when mixed with cake batter. Actually this is a trope I’ve encountered far more in during my young adulthood than my childhood. But for the last quarter-century I’ve been told that I am risking salmonella when licking the excess cake batter off a spatula. Been doing it for fifty years and not a rumble.

Acid rain. I had this fear as a kid that going outside in the rain was going to potentially blind me or burn off my skin.

Being the hardest worker. Or being really smart.

I’ve seen a meme that says something to the effect of “I have this thing at work where when I do a really good job I get to do somebody else’s job, too.”

That’s what happens to the hardest workers and the smartest people. They get dumped on.

You know who are the really successful people? The people who know the right people. Connections - be it nepotism or some other form of social bond - are the key to success.

It’s all in who you know.

You know who are the really successful people? The people who know the right people. Connections - be it nepotism or some other form of social bond - are the key to success.

It’s all in who you know.

Not always. There are some jobs for which you damn well better have smart, competent people. I rarely focused on making connections (and when I did, it was invariably to locate knowledgeable people for when I had questions, not the kind of connections you’re talking about). I always tried to improve my work, and later, to hire the most qualified people. I didn’t get dumped on, but I did keep getting promotions, raises, and bonuses. YMMV.

Being the hardest worker. Or being really smart.

Not in every case. I’ve worked my butt off my entire life. I don’t have a collage degree, but make a comfortable 6 figure income. No longer have a mortgage (house is paid for, I doubled up the payments every month) and any debt is paid off every month.

Hard work does pay off at least for some. It sure did for me.

That’s pretty close to my career history; no degree but eventually became pretty good at fixing expensive machinery. Knowing the right people wouldn’t have helped much. And the best-paid tech I know was far from a schmoozer; he was known for being kind of rude. But if a tool was down, money was being lost, and he was the one most likely to get it running again.

Overpopulation. I saw Soylent Green when I was about ten and was terrified because the events portrayed would happen before I even turned 60. Unless the price of a jar of strawberry jam jumps to $150 and they roll out the people scoopers next year, I guess I took the film too seriously. Guess I don’t have to worry about assisted suicide or corporate corruption either…

Strawberry jam is made of people!

When I was a kid I had a Batman comic in which Batman explained how to “swim” through quicksand so as not to get caught up in it. I tore out that page and saved it. You never know when that valuable data might come in handy. Even shared it with anyone who would listen.

Is quicksand as portrayed in the movies even a thing? Do people actually die in it?

ETA: couldn’t link to it, from Brittanica

“ Nope. Quicksand—that is, sand that behaves as a liquid because it is saturated with water—can be a mucky nuisance, but it’s basically impossible to die in the way that is depicted in movies. That’s because quicksand is denser than the human body. People and animals can get stuck in it, but they don’t get sucked down to the bottom—they float on the surface.”

You can die from hypothermia. What do you think would happen if you were floating in this stuff a long time in an area which didn’t have reasonably high temperatures?

Take it up with Brittanica. In any event, they die of hypothermia- not drowning in quicksand.

“ Nope. Quicksand—that is, sand that behaves as a liquid because it is saturated with water—can be a mucky nuisance, but it’s basically impossible to die in the way that is depicted in movies. That’s because quicksand is denser than the human body. People and animals can get stuck in it, but they don’t get sucked down to the bottom—they float on the surface.”

When I was a kid, we used to venture to a fresh water spring in central Florida that had something called the “sand boils” - you would sink, but never below your waist. In retrospect, it’s basically quicksand. (The link below, starting at about 7:12, shows what I’m referring to, although, to be clear, that’s not me). 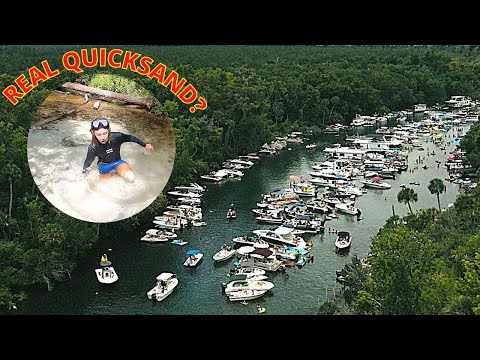 High school yearbooks and class ring - I thought I would DIE without them. Meh.