Well, I’m guessing they probably agreed all along but “seditious conspiracy” requires a stronger case to pursue, which takes time, plus they’ve been busy prosecuting all the casual tourists trespassers and vandals as the low-hanging fruit. 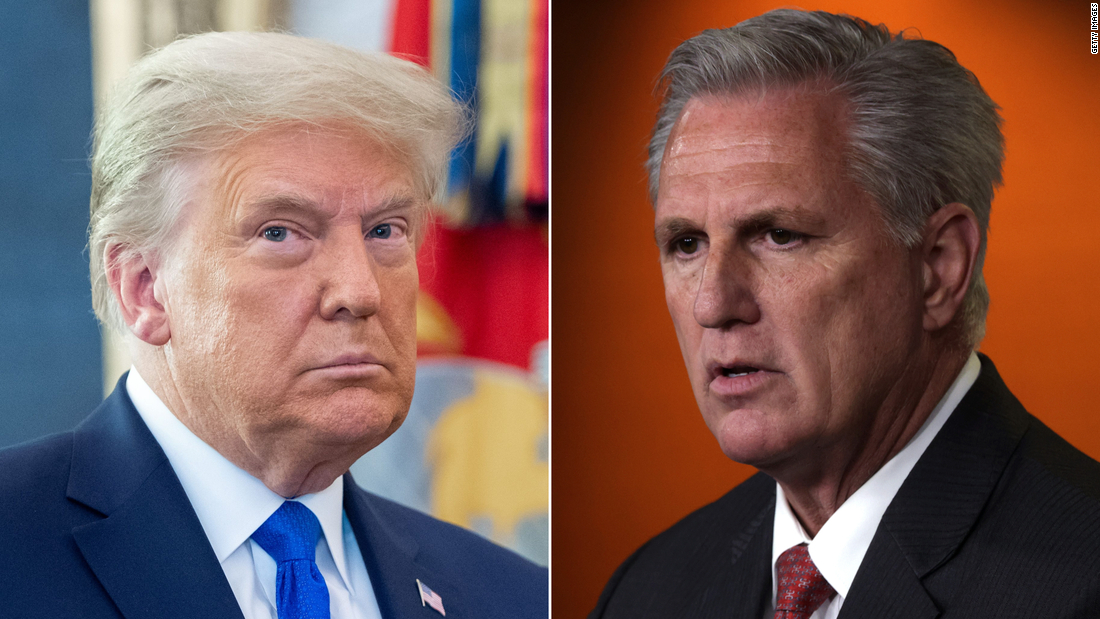 In days after January 6, McCarthy said Trump admitted bearing some...

House Minority Leader Kevin McCarthy said publicly and privately in the days following the deadly riots at the US Capitol that President Donald Trump admitted personally bearing some responsibility for the attack -- one of several reasons why the...

How the hell was he allowed to just up and leave? Clamp the fool into a chair, put a muzzle on him, and force him to say until the judge excuses him.

" Tim Boughner , 41, of Romeo, appeared via video for his hearing before U.S. Magistrate Judge Zia Faruqui on Wednesday. "

Bit difficult to restrain him over a video link.

Also, he has a right, not a duty, to appear at the hearing. If he voluntarily waives that right, it’s his choice. The hearing continued without him. He lost the opportunity to instruct his legal representative. His choice, his fault.

How the hell was he allowed to just up and leave?

He up and left to go back to his cell to eat crappy food and play cards with his new loves. He is throwing in the towel.

He up and left to go back to his cell to eat crappy food and play cards with his new loves.

He is playing the long game, waiting until the sheeple wake up and acknowledge that he is a Big Damn Hero.

WASHINGTON (AP) — Three more Florida men, one with connections to a rightwing extremist group, have been arrested on charges related to storming the U.S. Capitol during the insurrection of Jan. 6, 2021, officials said.

Alan Fischer III, 28, of Tampa; Zachary Johnson, 33, of St. Petersburg; and Dion Rajewski, 61, of Largo; were arrested Thursday and charged with civil disorder, according to federal court records. Fischer and Rajewski are additionally charged with assaulting, resisting or impeding certain officers with a dangerous weapon.

The men are being prosecuted in Washington, DC, federal court.

According to a criminal complaint, Fischer marched to the Capitol with members of the Proud Boys, a group that describes itself as a “pro-Western fraternal organization for men who refuse to apologize for creating the modern world; aka Western Chauvinists.”

Fischer was part of a group that confronted law enforcement at an arched entrance to a passageway into the building, officials said. The group collectively pushed against officers, at times rocking together in a coordinated way, to gain entry to the interior of the building, authorities said. Fischer later moved to the west front of the Capitol, where he threw chairs, an orange traffic cone and a pole toward officers, prosecutors said.

Johnson and Rajewski are accused of possessing pepper spray, and Johnson is accused of aiding and abetting its use against officers. Johnson also was carrying a sledgehammer, officials said.

Online records didn’t list attorneys for any of the men.

LOUISVILLE, Ky. (AP) — Two Kentucky men who pleaded guilty to a misdemeanor for going inside the U.S. Capitol during the Jan. 6, 2021, riot were sentenced to three years of probation and 15 days of confinement.

Dalton Ray Crase, 22, and Troy Dylan Williams, 26, who lived in Lexington when they were arrested last year, were sentenced Thursday by U.S. District Judge Carl. J. Nichols of the District of Columbia.

Nichols also sentenced them to 60 hours of community service and $500 in restitution, the Courier Journal reported. He added 15 days of intermittent confinement in jail or a halfway house. The judge said the men “engaged in more serious conduct than other defendants who I have given just probation to” but also took responsibility for their actions and did not directly assault any officers inside the Capitol.

People who had stormed the Capitol, called “asking whether there was a lost and found because they forgot their phone there, or they left their purse or what have you,” Rep. Jamie Raskin told Insider. The staffers passed on the calls to law enforcement. “The officers quickly got on the phone and said, yeah, just give us your name, your address, your social, you know, and we’ll tie up those loose ends.” 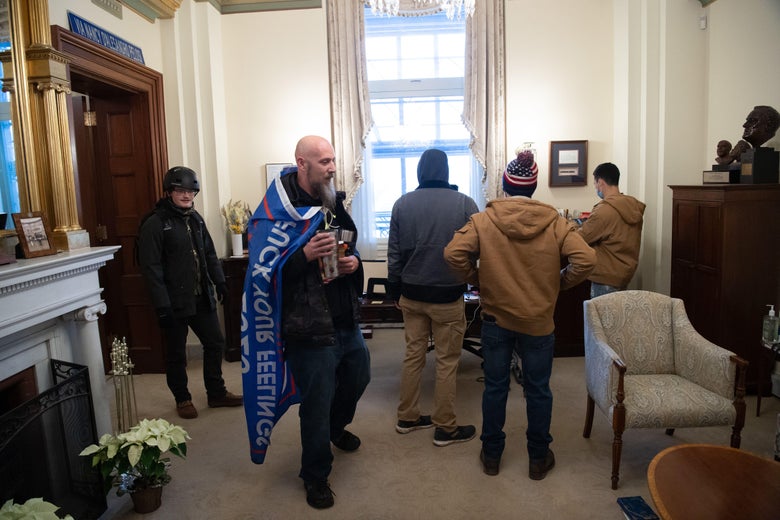 Capitol Rioters Called Pelosi’s Office Looking for Stuff They Left Behind on...

Rep. Jamie Raskin said law enforcement officers got on the phone to take down the information of those who called.

If I was their lawyer, I would argue that this showed that they had insufficient mental capacity to know what a crime is, and ask that they be released back to their group home.

WILMINGTON, Del. (AP) — A fifth person with ties to Delaware has been arrested on federal charges associated with the insurrectionist riot at the U.S. Capitol last year. The News Journal reports that Jeffrey Schaefer was arrested Thursday on four...

That Slate article, about the rioters who called the Capitol asking for the lost and found, linked to one from Insider in which Rep Jamie Raskin said, “But what’s so fascinating to me about that there really were people who felt as if they had been summoned to Washington by the president. And when they were told that they were trespassing and invading the Capitol, they said the president invited them to be there. They didn’t have any kind of subtle understanding of the separation of powers.”

They didn’t have any kind of subtle understanding of the separation of powers.”

Some of them didn’t have any subtle understanding of how to use a flush toilet.

How did I miss this? That’s like 36 hours of schadenfreude I missed out on! 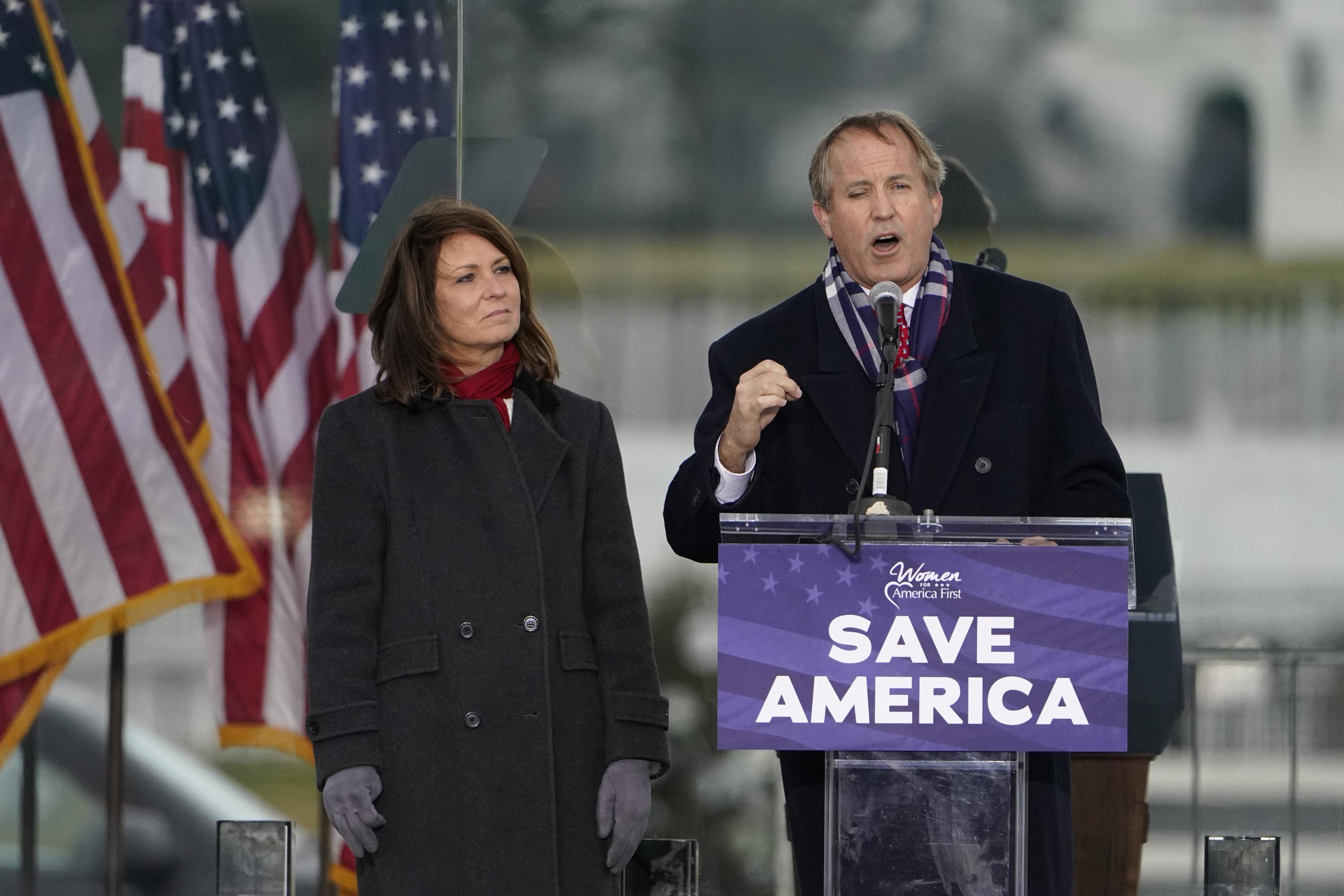 AUSTIN, Texas (AP) — A district attorney says Texas Attorney General Ken Paxton violated the state's open records laws by withholding or failing to retain his communications relating to his appearance at a pro-Donald Trump rally that preceded the...

A district attorney says Texas Attorney General Ken Paxton violated the state’s open records laws by withholding or failing to retain his communications relating to his appearance at a pro-Donald Trump rally that preceded the deadly riot at the U.S. Capitol last year.

The Austin-based Travis County district attorney’s office told the Republican attorney general in a letter Thursday that he had four days to remedy the issue or face a lawsuit. Paxton’s office has not returned a message seeking comment on the letter Friday.

And this is why so many people think they did nothing wrong. “See, they are right there on TV talking about it. If it was wrong, they would be trying to hide it”. It works perfectly for their stupid gullible audience. Not that I think Navarro is even trying for that. He’s just a monumental idiot. It’s a coincidence that happens to work.

Beau has a video about this logic: 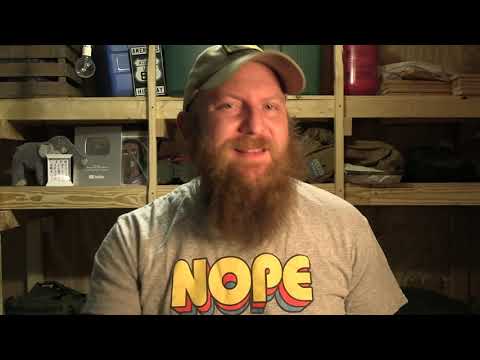 Got ticketed for speeding. Fortunately, my lawyer says I can plead it down to the lesser charge of attempting to overthrow the federal government.

Hey @JohnT – how did your insurrection debate go last week?

I posted the link above on the groups forum, so the moderators were prepared for this, lol. It’s not the first time I passed out something like this, and they actually appreciate it.

Anyway, I printed out 10, put them in clear plastic binders, got there, ordered my food (literally cannot remember right now), was enthusiastically greeted with a number of catcalls about “I didn’t know there was homework”, etc, lol.

It happened to be the moderators last day at this, so the meeting was loose and the topic kind of rambled, no big deal - we did relitigate the 2016 Dem primary for about 7 feisty minutes, that’s for sure. But it opened on the Insurrection, the mod gave the floor to me, told me I had five minutes, I set my timer (on my phone) and went.

If you remember the document above, I bolded particular points which I did specifically for this moment, when I would orally review the doc. Didn’t want to read it, of course, didn’t want to stare at it, just wanted my bullet points highlighted and ready to go at a glance. So I did that, focusing most of the four minutes on the numbered points, skipped the day entirely, spent 30 seconds noting that this community tracked this starting on November 9th, we started a “January 6th breaking news” thread on January 5th, and closed it out by referring to the top of the document: “Trump told us in 2016 he would not accept a loss. We watched him not accept a loss in 2020 and 2021. Believe him when he says who he is… and that’s my five minutes”, I close a few seconds before my phone starts to beep.

Toastmasters training does pay off.

So does being on the Dope for 21 years: These people think I did an amazing amount of research and writing, to me, it was just an extended SDMB post, and by no means my most complicated or “researchy” one. Thanks, y’all.

Anyway, like I said, the debate was kinda all over the place - after that, nobody was going to take the opposite tack, and if there was a Trump supporter in the room (about 15 people), they did not show their heads. I tend not to constantly participate, maybe adding a comment every 10 or so minutes, and I do this consciously because I can bulldoze my way to shutting you up, and winning is not the goal here.

Except when the question is “was that thing we predicted and watched in real time, ‘real’?” That one, I’m gonna dunk on some heads.

The group (partial). The woman to my right (unpictured) and myself were the only ones to wear a mask. The blonde woman on the far right of one of the pictures is Kate, and she does come to win. She’s my favorite of the group. 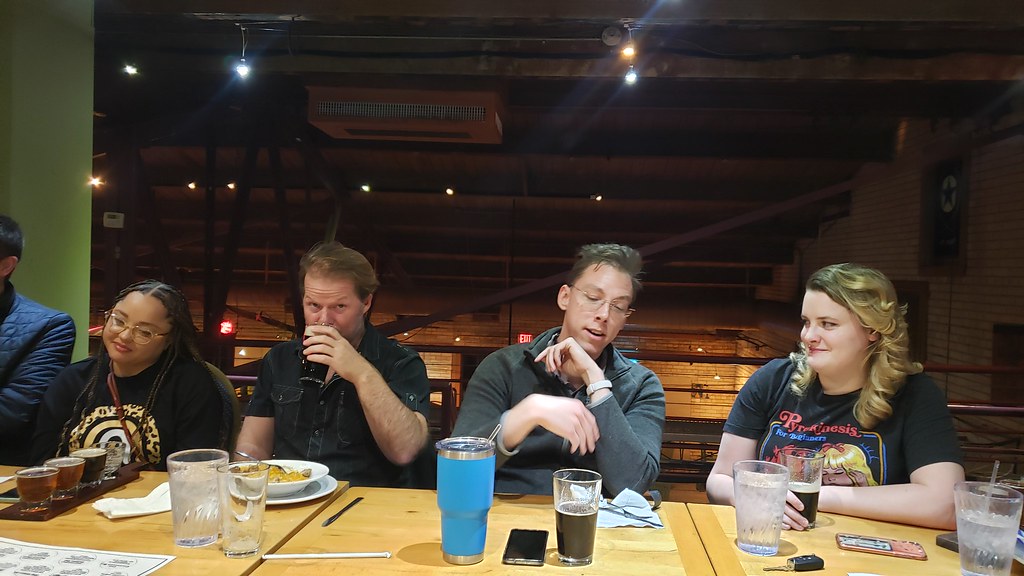 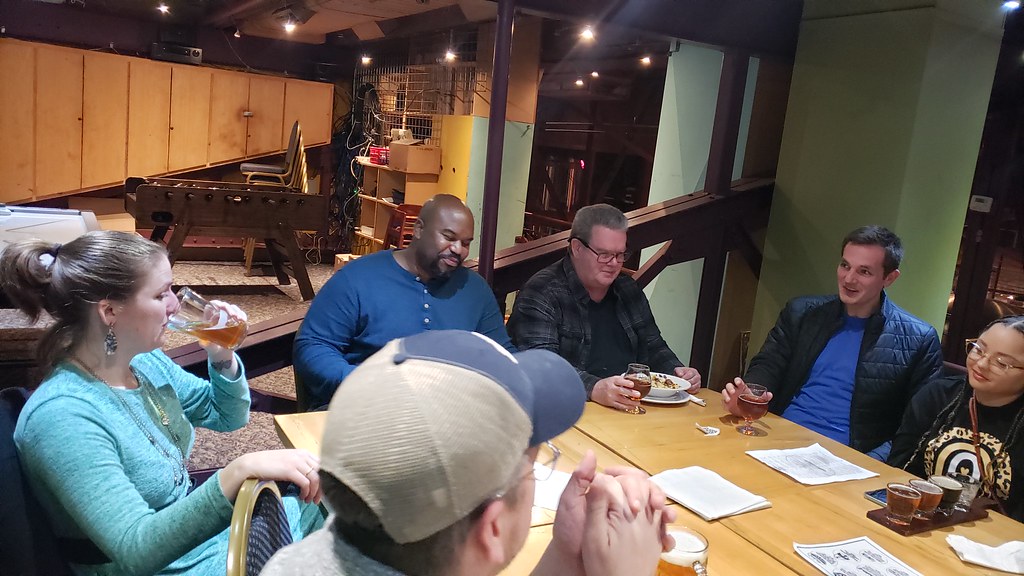 Anyway, like I said, the debate was kinda all over the place - after that, nobody was going to take the opposite tack, and if there was a Trump supporter in the room (about 15 people), they did not show their heads. I tend not to constantly participate, maybe adding a comment every 10 or so minutes, and I do this consciously because I can bulldoze my way to shutting you up, and winning is not the goal here.

Except when the question is “was that thing we predicted and watched in real time, ‘real’?” That one, I’m gonna dunk on some heads.

Good to hear – thanks for applying the Dope IRL to fight ignorance!