Did anyone else know someone who had a real life "Catch Phrase"?

And not a verbal tic or just something they unintentionally said a lot like “like”, but they deliberately went out of their way to have a catch phrase like somebody in a sitcom.

When I was in college I knew a guy who would use “Spank You Come Again” as his way of ending conversations. You’d have a normal conversation but then he’d end it always with “Spank You Come Again” instead of “Later” or “Bye”. He would even sometimes drop it in the middle of conversations. He was still doing it when I left college, everyone else I knew who interacted with him thought he was weird, but he smoked a lot of weed so maybe that explained it.

Let’s go to the quarry?

I once met a customer at Blockbuster who, whenever he gave an affirmative response, said “Roger that.” So annoying. Thankfully I only saw him the one time.

I know a guy who says “Roger that” as well! I don’t find it annoying, just kind of interesting.

You want annoying? My uncle, when leaving a party or other gathering, always used to say, “Glad you got to see me!”

I know a guy who frequently tells people, “you’re a terrible lady.”
He says it to lots of people, not just me!

I don’t say it every time, and only ever to my wife, but I will often answer a question with “Okey-dokey, hokey-pokey!”

I had a friend who always signed off from a conversation with “smell you later”, ala Bart Simpson. It was funny the first 50 times, not so much the last 8,000 times.

When I was in college, I ended conversations with “Thanks for coming.” After a while, everyone was saying it.

Used when asked “Can you…” or “Will you…” or “Who…”, or whenever something awesome needed to happen or did happen.

When something bad was about to happen, or did happen, it was more like “It’s not my fault”.

I once knew someone who would always say “Good! And yourself?” whenever he entered a room that had more than a few people in it.

My oldest friend, the only person from High School I still keep in regular contact with, has a saying that he lives by: “say what you mean, and mean what you say”. It’s one of the reasons why he’s my oldest friend.

I knew a tattoo artist (RIP) who, when someone approached him, 98% of the time preemptively grumbled, “What the fuck do you want?”

Those of us that knew him smiled and replied. But the guy on the street who just wanted to ask directions found him off putting.

And that’s the key. Although I’d put the first number lower.

I thought it was clever the first time they were at a fancy cocktail party and my dad introduced my mom: “And this is my first wife, Marie.” Back in the early 60s, it caught people off-guard, moreso than now.

[So he switched to introducing her as his mother. And persisted with that way past its expiration date]
.

Oh, Dad did have a catchphrase. He started it when we were little, after he’d read it to us in a kids’ book. We’d walk outside on a nice day and he’d bellow “‘Goooood morning, world’ said Buffin Bear.”

He kept that up for seventy more years, and now his kids carry it on. I said it just yeasterday when it was sunny and above zero!

I worked with a guy who often made this observation: “You’ll have this in a small town with no Sheriff.” Random situations would arise, and that’s what he would say. Sometimes he would say it just in passing, with no context at all. I assumed it came from a movie, but I’ve never found it anywhere, and when asked, he didn’t even know where he picked it up. But at least once or twice a day, he said it.

I have a friend who’s been saying “Hello, good people!” almost every time he enters a group of friends… since The Great Waldo Pepper came out, so… 45 years!

Here, I cued it up for you: 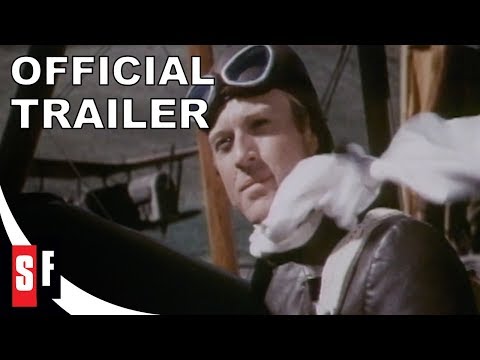 Let’s go to the quarry?

Can’t think of anything original some one says. I have met a lot of people that use really outdated stuff like “Pleased to meet ya, wouldn’t want to be ya”. Almost always an old white guy that thinks he’s a laugh riot.

I thought it was clever the first time they were at a fancy cocktail party and my dad introduced my mom: “And this is my first wife, Marie.”

I laughed the first time you posted that and I still think it’s funny now. So according to your schedule I should be ready to put you on ignore the third time.

When our father worked at the Alaska-Juneau Gold Mine as a blaster, my brother would go there to meet him when he came off shift. He would always tell his relief “Tap 'er light”, which I’m assuming means something in the blasting business. My brother picked it up and always said that to people when he parted with them.

My uncle told my family he knew a man who responded to everything said to him with one of the following: “There you go,” “What are you gonna do?” and “Better times are coming.”