The new season of Doctor Who has arrived. A short season of 6 episodes that will tell one long story, which is kind of how the original series did it. Today was Chapter One: The Halloween Apocalypse, where we are introduced to the new companion Dan, and a whole lot of explosive adventure with confusing exposition and timey-wimey hints at what’s yet to come.

It was good. A bit frenetic and haphazard, but very Doctor Who-ish in the ways most of us should enjoy. Yaz got to do a bunch of stuff, the new guy Dan is at the usual “I don’t get any of this weird stuff, but I’ll do anything you tell me to, Doctor” stage (I am no fan of John Bishop, but I can tolerate six episodes I guess), and the villains (or are they?) seem suitably imposing and scary, melodramatic and charismatic.

Speaking of, there are new villains mixed with some old returning ones, which is a way to kind of mix up the usual episode-to-episode appearance of them, by combining them and sporadically sprinkling them throughout. I imagine their individual significance will become clearer, but right now it feels kind of random, coming from all sides.

I think I will enjoy this season. Unlike many, I have liked all of Jodie Whittaker’s series so far, and will miss her when she goes. As I said, six episodes for this run, then a few specials next year, then she moves on and it’s back(wards) to Russell T Davies again. I look forward to delaying that regeneration for as long as possible.

I liked the opener! I agree, a good mix of old, returning with new things.

I have liked Jodie, I haven’t preferred the stories they gave her. And companions but only number. However, I thought this was a good start. I really liked what they were doing with her and Yaz.

I have no idea who John Bishop is other than now being in Doctor Who.

Thanks for the conversation!

I became an irregular viewer of the show during the last couple of 12th-Doctor seasons—I like Peter Capaldi a lot but had tired of showrunner Steven Moffat’s penchant for ‘it’s the end of TIME ITSELF’ plotting. I was also un-enchanted by companions Clara and Bill (though I do like Matt Lucas). I never came back, even when the new Doctor and new showrunner (Chris Chibnall) came on board.

So while BBC-America was showing a bunch of the Jodie-era episodes in the run-up to the Flux premiere, I watched quite a few, and liked them. I thought Jodie herself a fine Doctor. So much of the criticism of her seems, well, sexist; it’s amazing how many critics seem to feel the need to police her facial expressions. I don’t remember anything like that being “a thing” with the other Doctors.

Anyway, I’m in for Flux. Six hours offers the prospect of an intricate and involving story.

The opening of the show was a first class action scene. And I liked Claire, who knew the Doctor from a previous meeting she hadn’t gone to yet ( I loved that Aspect of "Silence in the Library).

… who knew the Doctor from a previous meeting she hadn’t gone to yet ( I loved that Aspect of "Silence in the Library).

Yes, that action-opener was well-done. For a minute I thought they were going to let the women fly around on the split gravity-bar (or whatever it was) for a while, for some Halloween ‘witches’ imagery–but they ended that bit pretty quickly.

You can see the appeal of the device–it lets the audience identify with the Doctor better when, once in a while, he/she is confused or taken by surprise.

IIRC, the Doctor knew why she had the grudge, though he didn’t say at the time.

I always liked the idea that the Doctor had additional adventures that we never got to see. Case in point, the Terrible Zodin. Or in “The Talons of Wang-Chiang” where the Doctor says he took part on the final assault on Reykjavík.

So far this season is more or less crap IMHO.

It’s kind of messy, too big and convoluted for its own good, and not especially compelling. I like the ambition, but not the execution.

So far this season is more or less crap IMHO.

I thought that the opener was a good return to an adventure. It was a chaotic mess but having watched a lot of six/eight/ten episode seasons on Netflix/Amazon, it felt like a typical opener when they have a long term story.

The sontaran episode seemed to be a good grounding, then. A solid adventure, although the Doctor trusted humans too much. Probably the Doctor should have expected some behaviors. Plus, it gave a bit more on the metaplot. I was looking forward to more of this.

The third episode went back to a chaotic mess, I can’t argue with that. They muddled everything without explaining anything. I think there is the trend that later things have to be bigger without asking if it’s better. A solid adventure is all I want at this point.

Just going to say that I would be perfectly happy never to see the Daleks, the Cybermen or the Weeping Angels ever again. The first two have been done to death, and the last has been absolutely ruined after the brilliance of “Blink”.

The Sontarans remain fun, though. For now.

So, I’m sleeping with the TV on and find I’m watching some sort of muddled, boring mess that I recognize to be the Newest Who. So sad.

I had such great hopes for her, but was almost relieved when a commercial break occurred, except it was Mike Lindell who spent the first half of his pillow ad complaining about Cancel Culture. At least I think it was half; I changed the channel when I figured out it was just a commercial It’s his money and he can spend it as he sees fit; they’re my brain and I can waste waste them as I want, but I tried to imagine the intersection between the sets of Who fans and Trump fans and I’m not finding much. Strange marketing, and I don’t like being forced to think at 4:45am.

A solid adventure, although the Doctor trusted humans too much. Probably the Doctor should have expected some behaviors.

They’ve done the “but they were retreating!” Holier-Than-Though bit before. 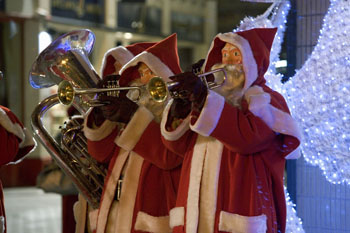 The one where the Doctor's bummed he's rude and not ginger. Written by Russell T Davies, this story notably marks the first Christmas special in the series since "The Feast of Steven" exactly forty years prior. It's become traditional for a new …

They’ve done the “but they were retreating!” Holier-Than-Though bit before.

See also: Doctor Who And The Silurians

DW writers are still mad about the Belgrano.

Yes, he does. I think there was a few more examples of this, with Smith and Capaldi as well. And the Silurians. And I’m sure more. So, while consistent, I would have thought the Doctor would do “trust but verify.” Or trust but don’t let them betray you. Again.

I liked episode 4 more than typical for this season.