Just found out about it this morning through xkcd, immediately tried to get into it - unfortunately it looks like the Google folks are rolling this out very slowly to a very small test audience.
One can sign up here to be notified when they’re ready to take in more people.
I have high expectations for this, hopefully it won’t turn into another Wave or Buzz

I’m jumping in on this list here. I was in on the Straight Dope WAVE invite list and that worked out well for all involved (except Wave, haha). I’ll keep you guys in mind if I get an invite. In addition to what xkit0katx has said, an invite comes with more invites. Think Gmail’s rollout.

I think this has more potential than Wave did mostly because nobody was exactly sure what Wave was supposed to do or what you were supposed to use it for. (And I say this as someone who was an early Wave adopter, too.)

Everyone knows exactly what Google+ is supposed to be: a non-shitty Facebook. If they can get enough people using it so that it gains critical mass, I think it’ll be huge. I was looking through the info on it and it looks like their privacy settings and group settings are a lot smarter and better, i.e. it’ll be a lot easier to keep your mom and Aunt Edith from seeing your drunkbooking updates or whatever. I mean, if you’re the type of person to post lowbrow stuff like that. I’m sure I don’t know anyone who would do that.

Oh man, I would love that. I emailed them to be notified when it’s real but if anyone gets any invites, please remember me!

Ditto. Hubby and I would love invites as well.

this has potential… me too!

If they are invites that can be shared I’d love one too. Based on wave and gmail I think they’ll go to that model of invites, even if not right away.

I’d like an invite too when they roll out.

Me too, please, if anyone has a spare.

Although, honestly, I’m not any clearer about what Google+ is supposed to be than Google Wave, which I never bothered with. Also, Google Buzz is still sitting there on my gMail screen. I never look at it either. /mystified

I got sent an invite but dunno if that gives me invite privileges. I’ll have to see.

I would like to try out this too! I’ve also sent in my mail, and still waiting.

Yes me too please.

Although, honestly, I’m not any clearer about what Google+ is supposed to be than Google Wave, which I never bothered with. 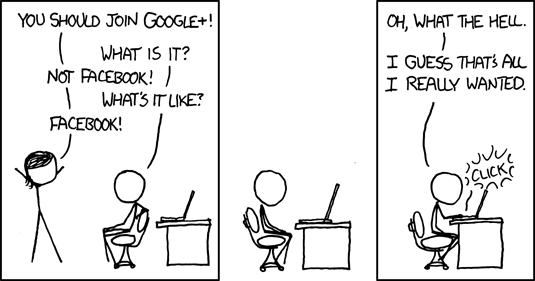 I am on the wait list too. Totally down to switch over to something that is more in-tune with the privacy expectations of its users than Facebook.

I’m not in any hurry to join up, but it does sound like something I could eventually get on-board with - unlike FaceBook which I wouldn’t touch with your 10ft. pole.

Ok, well I once created a completely bogus account so that I could view something that required logging in. Then they eventually deleted my fake account, so I refused to ever sign in again, fake or real. But if Google+ pulls the same shit where you have to join and sign-in to view completely public content, then I will probably similarly shun it on principle. Fuck walled gardens.