My old mouse is finally starting to crap out, so I’m in the market for a new one. Recommendations, please!

A right-handed mouse preferred, but ambidexterous is acceptable.

In addition to the normal left- and right-click buttons, it must have: scroll wheel; left-side (thumb) button; middle (scroll wheel) button; right-side (ring/pinkie) button. Anything beyond that is gravy.

Gaming-wise, I’ll mostly be using the mouse for WoW.

I like, of all things, my Microsoft Sidewinder. It has two thumb buttons, instead of a thumb and pinkie button. Nicely weighted, the feet are very smooth and precise, and the weighted scroll wheel is a real delight. (Mine’s the version with the LCD screen)

Generally, I bind the lowest thumb button to ‘180 turn’, which works very well.

Logitech MX518 or Razer DeathAdder. Both are proven. Get the one that feels better.

I have weird driver issues with Logitech. It seems to make my left control key stick down sometimes.

Seriously, it was a Logitech driver that did it. G5 Gaming Mouse. I personally run a Razer soundcard, and the DeathAdder gets excellent reviews, though.

Logitech MX518 is the best gaming mouse, hands down.

Don’t install the drivers (ever, for logitech mice) and enjoy your buttersmooth lewt grinding.

I’ve got a Logitech mx610. It has 12-14 “buttons”. Very handy back when I played WOW. It is a cordless mouse, which is a fault to the truly hardcore gamers, but it’s been fine for me. And I have always liked the Logitech Setpoint program as well. You can reprogram almost every button on the thing (the 2 email buttons aren’t useful), including profiles for different games.

The best gaming mouse I ever used was what’s called a “joystick mouse.” It’s made for people with motor skill disabilities. It’s like a heavy, very solid mouse which sits on top of a stick which slides around like a joystick on a heavy, metal base. It gave me pinpoint-perfect aim and accuracy and felt very comfortable in my hand. If I had the money, I would buy one for playing FPSes.

The two best makers of gaming mice (I had a sudden mental image of the paintings Dogs Playing Poker, but with mice) that I’ve seen people agree on are Logitech and Razer.

My old mouse is finally starting to crap out, so I’m in the market for a new one. Recommendations, please!

Just a thought, but I used to be absolutely lethal in FPS games with the combo of an ordinary trackball in my left hand and joystick in the right.

2 thumb buttons, adjustable sensitivity on-the-fly, accurate, and it has a tilt-scroll wheel, which lets you scroll left & right, or can be assigned to something else in-game. I was concerned about the tilt-wheel when I ordered it, but all normal wheel functions are easy to perform without accidentally triggering the tilt-wheel.

Make sure to get the blue & black one that has the 2 thumb buttons, as the early one was a sort of reddish rust-colored with one thumb button. That shouldn’t be hard - at this point, it’s probably impossible to get the 1 thumb button model if you tried.

Best mouse I’ve ever had. It comes in a wireless version (G7), but I don’t want a wireless mouse. Plus, it also only has 1 thumb button.

Another vote for the Logitech MX518. It’s down to $40 now, and it’s still a rock solid wired mouse. I’ve had it for three years now and never had a single problem.

[edit: it has two thumb buttons instead of a pinky button. I prefer that, but YMMV.] 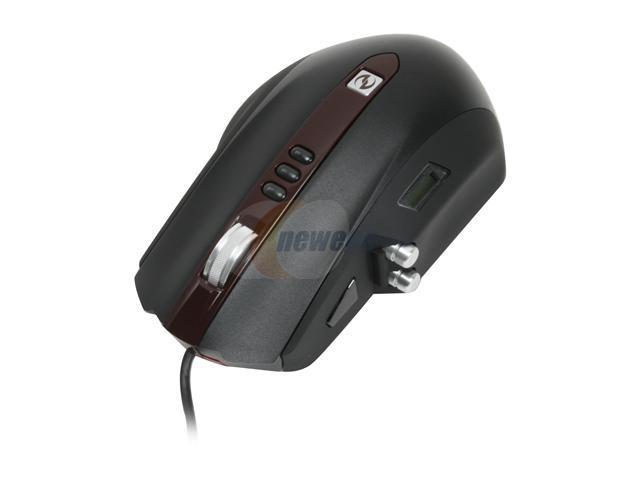 Just so people know what I’m talking about. The fun bit is that the box that contains the weights and extra feet also clips onto the cord, so you get slack instead of it dangling down somewhere. The metal mouse wheel has indications when you go up and down one notch, but it rolls very smoothly. The chunky back fits into the hand well.

Yes, the 518 is the best mouse I’ve ever used. If it ever goes out of production I’ll probably stock up on a few so I can keep using them over the years.

Edit: I broke my last one a few months ago. I didn’t want to wait a few days (having no backup mouse) for an order from newegg, so I ended up looking for one at Target (the retail store). Apparently there’s a special Target edition 518 that has a red coloring… and it was only $30. I was skeptical that something would be wrong or substandard about it, but it has worked fine for me. So if they still have that, and you prefer red to the unusual moon crater look of the original, you can try that route.

It comes in a wireless version (G7), but I don’t want a wireless mouse. Plus, it also only has 1 thumb button.

The G7kinda sucks. The battery only lasts around 3-4 hours of solid use. And while it has a charger and fast-swap batteries built into the receiver it gets incredibly old swapping them out several times a day every day.

It also broke down on me(left click stopped working) after only around 3 months. Which is around 2 months less then most mice last me.

Even on logitech’s own site only

I’m currently using LX7. After buying new $90+ gaming mice every few months for years i decided to go cheap(er) and i’m loving it. It’s batteries lasts like forever(i changed them for the first time two days ago) and i’ve been using it for more then 8 months now, with no sign of it starting to break down on me, which is *way *longer then mice normally last me. My only complaint is it doesn’t have any thumb buttons. But it’s a worthwhile trade off for a mouse that a: lasts more then a few months and b: isn’t enormous like many ‘gaming’ mice and c: hasn’t had any connectivity issues unlike most microsoft mice i’ve tried

Of course if you don’t mind wires you can probably get much better mice as cheap or cheaper, but i can’t stand wires on my mice and the LX7 is the best wireless mouse i’ve used so far out of the 20ish different wireless mice i’ve had. Most of which were high priced ‘gaming’ mice.

I second the Logitech G5. I’ve been using this for over a year and it’s silky smooth with adjustable sensitivity.

Don’t neglect your mouse-mat though. I use this Razer mat, it blows my previous mat (a flat baking tray) out of the window.

With that combination, you’ll have to find something else to blame (like OP Paladins)

Huzzah, a nice big long string of recommendations to check out! Thanks, all. (And keep 'em coming if you think of any more.)

Sorry to semi-necro this sucker, but I just want to come back to say thanks! I had some unexpected medical expenses come up the day after I posted this thread, and I wanted to make sure I’d received the bulk of the bills before I started spending money on fun stuff again.

Based on people’s recommendations here and rave reviews at Newegg and Amazon, I picked up a Logitech MX518. I’ve had it for about a week, and so far I’m quite happy with it. (Side question: Anybody know if it’s possible to reprogram the buttons by the mouse without installing the drivers?)

Oh, that’s okay, it’s the perfect time to show you something shiny.

I read WI nigh-religously, so I caught that one when it came out. The GIANT GRID OF THUMB BUTTONS OMG was a big turn-off for me, actually.

Based on people’s recommendations here and rave reviews at Newegg and Amazon, I picked up a Logitech MX518. I’ve had it for about a week, and so far I’m quite happy with it. (Side question: Anybody know if it’s possible to reprogram the buttons by the mouse without installing the drivers?)

The MX518 is what I use as well, but I can’t answer your question about programming the side buttons. I’ve only bound one of them to push-to-talk in vent, and I did that through the Ventrilo configuration. I really want to bind the other one to Shift or something but haven’t installed the driver yet.