New federal holiday in the MMP

And its good for end of that horrible time to be formally recognized. I’m guessing that things might be confused tomorrow though.

Many people won’t realize that it is a federal holiday so government offices will be closed. BFF who works for the state says they will be off but lost Columbus Day cause of course they can’t get them both.

I’ve just finished the laundry and popped into the Pit and started quoting poetry, so think I should get a small glass of milk and go to bed.

Have a great day and a great week!!!

As a retired federal employee, may I say that I think there are too durn many federal holidays. I even said that when I was still working and benefiting from all those free days off.

The estimated taxpayer cost for each federal holiday is $818 million – and that’s just within the executive agencies, not including the military or U.S. Postal Service.

The most worthless, IMHO, are President’s Day and Columbus Day. And it seems so wrong to celebrate Labor by not working. Having Thanksgiving on a Thursday makes no sense, and frankly, I think it treads the church/state separation line too closely. I know it’ll never change, but it should. Same for Christmas, altho it’s become so commercialized, the religious significance is pretty much lost. And New Year’s Day is just Hangover Recovery Day.

What I’d like to see is for federal employees (and others, why not?) to be given six floating holidays to take on the days of their choice from among the 11 designated. When I’m Queen of the Nation, that’s my first executive order. < kicks soapbox behind couch>

Anyway, it’s yet another cool morning in Southern Merrylande, and we may continue to have not-terrible temps for the rest of the week - to be seen. I’ll be watching Tobias while SIL goes to PT this morning, then I’ll run to WalMart for cat litter and a couple of other things, followed by a run to the boat to see if FCD needs my help. On the way home, I’ll swing into Aldi for a couple more things. I did 3 loads of laundry last night, so that’s off my list, and FCD is going to make the trash/recycling run, so that’s another off the list.

Speaking of Tobias, my daughter shared his poop face: 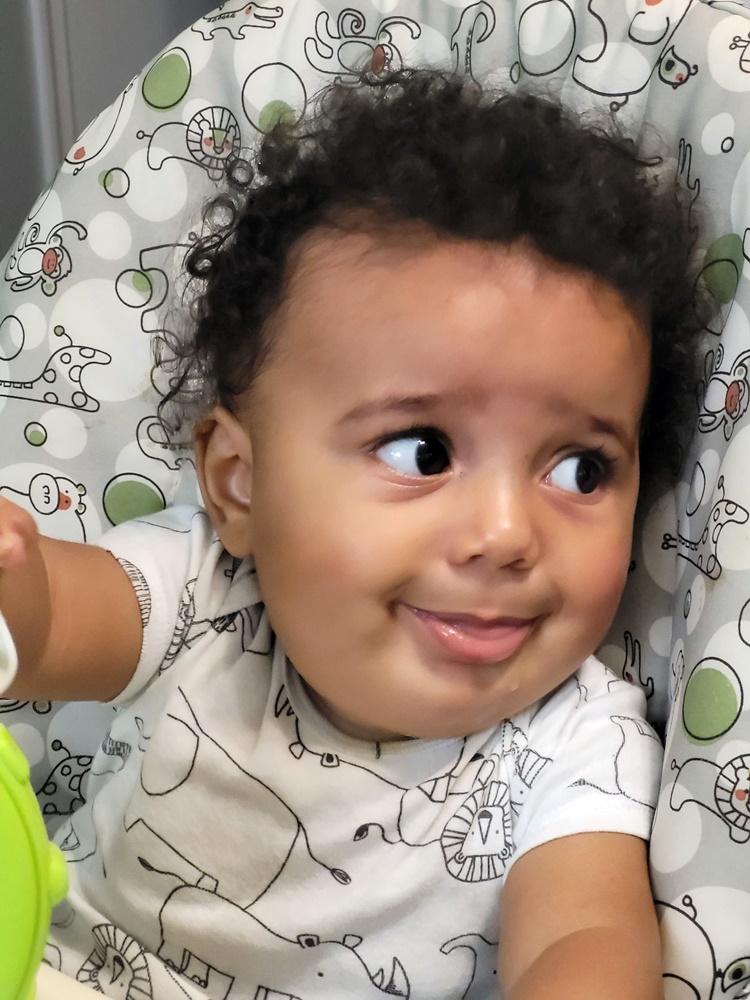 What better way to start the week??

Afternoon, mumpers! It’s 19c/66f and mostly cloudy, which accounts for all the sun coming through the office windows. Weather app says “It’s fucking cloudy and mild. Let’s get crazy and get kitten tattoos we’ll probably regret later”, which sounds like a good way to end the day.

I am lucky to get all the public/bank holidays off work, as well as a couple of extra “closed days” that the University throws into the calendar. We also had a notification on Friday that the Uni will be closing three days early at xmas so we get some bonus holiday then too. I can’t say I’m disappointed with that idea, it means I’ll get two weeks paid holiday over the xmas period.

Other than that, I gots nuttin’…and it’s our busiest week of the entire year so I’d better get back to being productive!

Good Mornin’ Y’all! Up and caffeinatin’. YAWN ‘Tis 71 Amurrkin out and cloudy(ish) with a predicted high of 94 and mostly N.O.S. It’s almost chilly compared to the temps over the past week! No big plans for the day outside of men’s night over to the church house tonight. I foresee much sloth and some quality cee-mint pond time. Durin’ my irklife I never got all those federal holidays off until my last gig.

Now I need more caffeine and to feed rumbly tummy. Then, onward into the day! Rah,

Mornin all. Tis in the 40’s here, headed for mid 70’s later. I got shit to do, but got the donwannas. Hope y’all are doing better.

S’posed to crack 100 today, so I think we’ll just hunker down. Two of my three kids wished a happy Father’s Day, so maybe I’ll review my will. Breakfast sandwiches are on the menu for this morning; the sriracha and mayo is what bumps it into gloriousness.

Having a new holiday reminds me of our Foreign Service time. The embassies would close for both American and local holidays, some of which ran consecutively. We had a lot of long weekends in some locations.

Morning all. Slept well so now need to get back to normal things after a long weekend of soccer. Need to do a little shopping today and water the front yard, it’s supposed to be in the 90’s all week and no rain is expected, so the lawn is going to be thirsty.

FCM, my only problems with the Federal holidays is that they seemed bunched up, you might have 2-3 of them in a couple of months then go three months without any. Or maybe that was just my perception.

And a beautiful picture of ‘poop face’; at least that’s all we got to see was the face…

Cookie, I worked overseas too, and while I was associated with the Embassy I worked on UAE property so we pretty much took their holidays and tried to be circumspect about our own; of course Eid Al Fitr meant having 3-4 days off and when the brother of the ruling Sheik passed away we got a whole week off for mourning, so there was that…

OK, onward into the week. All y’all take care.

Morning, all. Today started early with Pixel not only rousting me out of bed before 6am, but also puking in the middle of the bed so I couldn’t just go back to sleep. Stinker!

Got all my essential chores done yesterday, so I might not even leave the property today. Already got the watering and pruning done, so the cats and I are sitting here in the office watching the hummingbird squadrons hitting the feeders for that early morning buzz. Supposed to get up to around 93ºF today, so a perfect day for doing sweet f-all. Stay cool, peeps!

It was so much fun. I definitely want to do it again. I think I’m hooked.

Being a still active fed, I didn’t think we needed another federal holiday, but I am not sorry we get them. It’s not like we actually get large bonuses and our pay is lower than the private sector in a good many cases. We’ve never been paid in accordance with the Federal Pay Comparability Act either. So, I’ll gladly take my days. I do charge myself an hour of leave for any day that falls on what would normally be a nine-hour day since I’m on what they call maxiflex, but it’s a small price to pay.

I spent Father’s Day morning running around and took Polar to the vet. Turns out he had both a bacterial and fungal infection, so he’s on two types of oral meds for three weeks. I got his nails clipped and his lungs sounded good.

After the appointment, I brought him home and dashed off to the store to get some kind of dessert to take up to the kids’ place. We left around oneish and spent the day with the kids. The grandkids were thrilled to see Grandma and Grandpa and Adam led his partner in crime (Grandpa) all through the house, outside and back again. He didn’t really leave Grandpa’s side very often.

We left around 7:30 and came back home and just relaxed.

I’m just going to relax today, get the lawn mowed, and MAYBE head down to Lowes to buy some stuff.

It was definitely a Federal holiday, as I was out by 0845. I stopped at Harris Teeter for an onion
[Grandpa Simpson] So I tied an onion to my belt, which was the style at the time…[/Grandpa Simpson

he most worthless, IMHO, are President’s Day and Columbus Day.

Juneteenth makes more sense than Columbus Day, and they should move President’s Day to election day.

Holidays for me just mean it’s more crowded at the Zoo and I have to work harder. I get extra pay for some of them, but not all. It’s a weird contract. Juneteenth has not been negotiated, and I’ll be gone from there by the time it ever does anyway. But I’m not mad it’s been made an official federal holiday. It’s an important moment in our country’s history.

I agree that Election Day should be a holiday.

Forgot it was Monday and posted a trip update over on last week’s MMP, should anybody care to read it.

Have a good day and week!

My beef with Federal Holidays is that they aren’t equally distributed throughout the year. Agree that Columbus Day needs to be abolished with Extreme Prejudice. But making Election Day a Federal holiday will give us 2 holidays in 2 weeks in November, with Thanksgiving giving the month 3. Ditching President’s Day means you have a stretch of nearly 5 months without a holiday, which is Bad.

I agree that Election Day should be a holiday.

I’d like to see Christmas renamed “Yule”, and Columbus Day renamed “Indigenous Peoples Day”, but the likelihood of any of those happening rapidly approaches zero.

Cats are both currently snoozing, *'m awaiting Instacart. Aside from some laundry, no significant plans for the day.

Well, dumb me. Not realizing today is a new federal holiday, I took something to the post office that I really wanted to go out today. When I got there, the place was deserted. A guy came in behind me carrying a load of packages, looked around and said, “What the heck?”, turned and left.

OK, my mail can go tomorrow without much harm. But, on the way home, I saw two USPS mail trucks, delivering mail to home mailboxes along the street. Did someone forget to tell the drivers that they had the day off? I’m confused!

On Sunday, certain UPS locations will remain open but will only deliver through their Express Critical services, pausing all other deliveries until Monday.

I work for a big federal contractor: Juneteenth isn’t a corporate holiday (Presidents’ Day and Columbus Day aren’t, either), but sometimes it’s kind of nice to have a day when we’re working and our customer isn’t.

Of five meetings today, I’m currently at two down with three to go. I’m taking advantage of this brief lull to say hi to y’all (hi!), and am waiting for the sands to finish trickling through my “don’t eat for 30 minutes after drinking” hourglass – I guess technically it’s a half-hourglass – so I can get some lunch. Maybe while I’m waiting I should decide what I want…? Nah, it’s more fun to figure it out once I get to the kitchen.

my only problems with the Federal holidays is that they seemed bunched up, you might have 2-3 of them in a couple of months then go three months without any. Or maybe that was just my perception.

FWIW, here are the counts:

Feels alright to me…though I will admit that if I haven’t taken much time off in March or April, by Memorial Day I’m really looking forward to that holiday!

I am now an actual, real, honest-to-goodness performer.

It was so much fun. I definitely want to do it again. I think I’m hooked.

Helped FCD a wee bit on the boat, had lunch with him, then went to Aldi. Now I’m about to gather the household garbage and recycling. Then I’ll chill a while. Because I can!!