Not worth engaging when you’re in this “state”.

Kansas State. We’ve never won anything, and likely never will. In fact, we’re probably historically one of the worst football programs of all time.

I don’t base my self esteem on my college’s sports accomplishments.

Go get some coffee and calm down macho man.

The woke police are after me. I can’t post anymore.

In fact, we’re probably historically one of the worst football programs of all time.

Prior to November 24, 1988, me and the data would have agreed with you. On that day, things changed dramatically and I still believe that he did more with less than just about anyone else has ever done.

Oregon was lucky not to have a Stanford-style repeat.

UConn wins! UConn wins! Okay, it was against Yale, but still, that means that Arizona is the only winless FBS team remaining.

Oklahoma and OK State both stay undefeated. That last weekend in November is setting up to be exciting.

There’s a good chance that both OU and OK State will remain undefeated until they meet in the last weekend of the regular season. Should that happen, they will again play each other the next weekend in the B12 championship game.

An undefeated B12 champion would have to be included the CFP. A once-beaten B12 champion might very well be left out.

OK, my Spartans had a lackluster first half against Indiana. It looked like Dantonio came back to call the offense. Run the ball up the gut and if it doesn’t work, try it again and again. Still, it was a gutty win on the road against a decent team. But they’ll probably fall in the poll today because they’re not in the SEC. Mind you, if Alabama were to host Sam Houston Institute of Technology and eke out a 6-overtime win, they’d go up in the polls but that’s because they’re Alabama and have a God-given right to move up in the polls every week unless they’re already number one.

Iowa had a terrible no good rotten very bad day. They’re still a good team. But because they’re not in the SEC, one loss disqualifies them from the playoffs.

Just a little fun showing how tricky ranking teams can be sometimes.

Armed with just the above, I’d probably give the top ranking to “B”, but it would be close. “A” would get strong consideration as the point differential is much greater. I still think that the opponent strengths are close enough that I’d tilt to “B” for now, with “A” a close second. Slightly better overall opponents and zero losses, albeit in closer games. “A” has also played one more game than the others, so they are technically further along in their schedule and should get a boost for it. I’d not really have an issue with calling “A” and “B” close to a tie until “B” catches up in games played.

I’d give the third slot to “D”. Better record than “A” and a killer point differential, but pretty weak opposition over all.

In last place, and not particularly close, is “C”. Basically the same weak opposition as “D”, with a far worse point differential and a loss to boot.

Who dat? Obviously none of them are LSU.

And remember, transitive property fans (you know who you are), this is the same BYU that schooled the PAC 12. 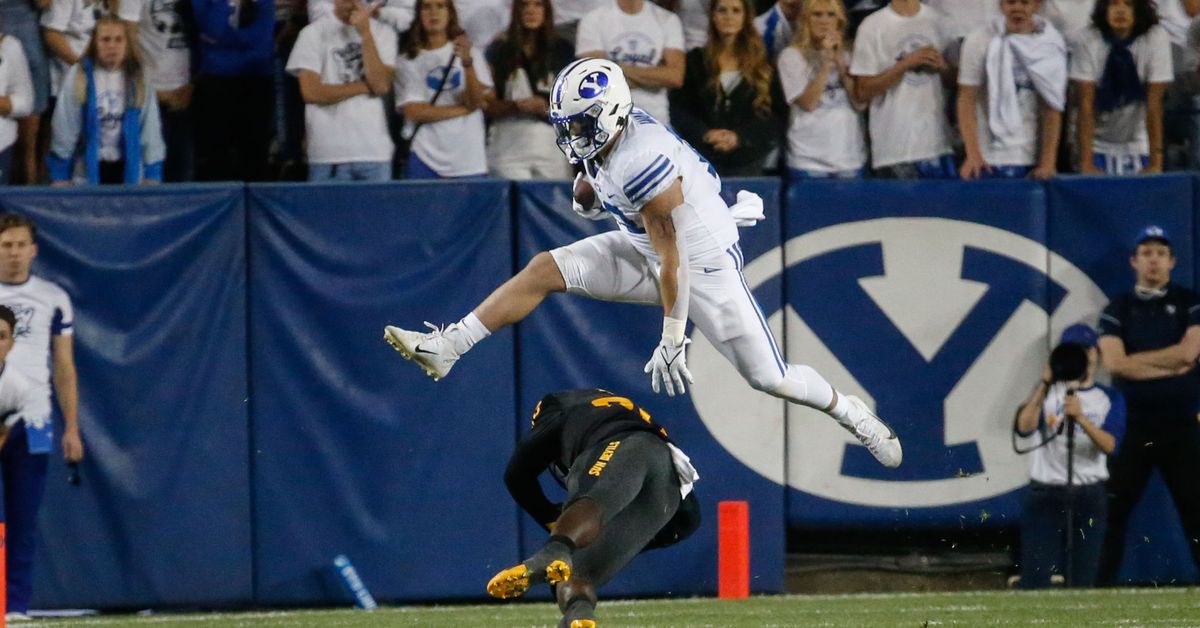 The Cougars took down ASU, so shouldn’t they be leading the Pac-12 South at 3-0?

Tyler Allgeier, Jaren Hall, BYU’s defense and the home crowd all proved huge in win over the Sun Devils

Orgeron becomes the first to fall! (Sort of - he’s finishing the season):

Orgeron content to leave LSU after 'a great run'

Only 21 months after guiding LSU to a perfect record and national championship, Ed Orgeron and the Tigers have reached an agreement for him to step aside after this season.

He had to go – not just because of the last two seasons but because of his failure to report sexual assault. He cannot manage a major program. He’s assistant coaching material and maybe an interim coach, but he can’t handle the responsibilities of being a head coach and leader of a major program. He benefitted from what Les Miles left behind. To his credit he didn’t screw up a sure thing. But that was his apex. It’s downhill from here. We need a new coach. Hopefully James Franklin but I doubt he goes to LSU; Franklin’s probably headed to USC, where they can pay him some serious coin and he can be a West Coast media star.

The SEC is going to end up in some sort of weird “tragedy of the commons” situation. You’ll have 6-8 teams all firing their coach every 4 years because he didn’t win it all every other year. And, after awhile, none of them will win it all ever. Realistic expectations need to be a part of the game and LSU better adjust to that. You’re in the same division with Alabama (with Texas A&M rapidly rising). Get used to fighting for 2nd in the SEC West with down years and years where you actually win it. And frankly, over time, the former will outnumber the latter.

With all that said, I actually agree that Orgeron’s problems extended far off the field, but if he was 6-0, would it matter? At that point, not many LSU homers would give a shit about the sexual assault - which is sad commentary on the state of college athletics. He’s getting fired for losing, the other issues provide some “see! we’re sensitive” cover, but ultimately had little to no influence on the actual decision.

Get used to fighting for 2nd? Bro, that’s pretty much every year since 2008 - we’re used to it. What we’re not used to is not being competitive, particularly given the high school talent between Houston and Mobile, AL, which LSU recruits.

Losing to Alabama? We get that. Losing to Mississippi St or Auburn two years in a row? No. Not tolerable.

To (mis)quote Justin Timberlake:
Come on down to Tennessee-town!

I fear my beloved 'Noles are headed in the same direction. Too many schools, too little talent, and the coaching carousel begins…round and round it goes, where it stops, nobody knows.

Rumor has it that LSU is looking at Michigan State’s Mel Tucker. I hope it doesn’t happen, stealing Saban was bad enough.

I heard a rumor that Jon Gruden is available. I’m going to think about the culture fit for a bit.

And Alabama ascends back into the Top 4, as God intended.