Sadly you’ve just summed up one of the reasons why Remain lost - a small faction who kept insisting the only reason people would vote Leave were race-based. I was organising an unrelated information stand and got to watch this in action. On a street stall, when voters approached with sensible concerns about tax (e.g. the Tampon Tax), governance, obstructions to recycling, all certain of the Remain campaigners would answer with was that the voter was racist. If the number of people who glared and walked away were anything to judge by, it alienated potential voters. You don’t win hearts and minds with insults. The Leave campaign stand opposite cottoned on and started pushing the tax issues then sending people across…

A lesson that should be but won’t be understood.

Haven’t heard anyone say it’s not binding. The Prime Minister has already resigned.

Haven’t heard anyone say it’s not binding. The Prime Minister has already resigned.

Legally, it isn’t. It’s an advisory referendum, informing Parliament of voters’ preference. In a purely legal sense, Parliament is under no obligation to act.

In a political sense, of course, they have to do something. But they don’t have to invoke Article 50 (the formal mechanism for leaving the EU) today. They could, for example, announce their intention to invoke it in a year’s time and start negotiations on that basis. (Once invoked, there is a 2-year window for negotation after which, deal or no deal, we would be out. If no deal, we’d have the same relationship to the EU that, say, Lesotho does. So giving ourselves an extra year by delaying Article 50 is not a bad idea.)

Johnson, to name one, has previously floated the theory that a Leave vote would merely be the stick to encourage the EU to offer better terms for the UK to stay. Whether that happens, and indeed whether Parliament could get away with accepting those terms without a second referendum, is hard to call.

Johnson is now saying that there is no rush to invoke Article 50.

I voted remain but am not surprised by the result. Remain’s campaign was negative, dishonest and patronising.

Both campaigns were negative, dishonest and patronising. The difference was that Remain had actual economic arguments on their side (not that they made them).

Absolutely they could, the issue is whether they can survive the next election or even a no confidence vote if they do that. I do fully expect that the government will attempt to delay the invocation of article 50 for as long as they can get away with.

It’s hard to tell how this will play out. I’m not especially worried about the toll on financial markets – that’s typical market overreaction, which will correct itself and stabilize in time.

I may be off, but it seems to me from afar that the UK has never completely bought into the idea of being a part of Europe. They did have their own currency all this time, after all, and they weren’t a part of the Schengen area agreement. So the idea that this is some radical departure from the norm for British appears to be a stretch, I think. It’s as if Britain joined the EU conditionally, with the idea that they could function independently and a higher degree of individual sovereignty, while taking advantage of economic advantages that integrated British companies and financial interests into the economy of the Continent. I think the move will probably cause some harm to UK companies and the British economy because they’ll have to reset their economic relations with the rest of Europe.

As for Europe, I think it’s a matter of how long the Germans and French want to support drags on their economy from neighboring states. And it’s also a matter of how long Europeans want to be taking on immigration from North Africa and the Middle East. It’s not automatic that Europe cracks up, but Britain established a precedent that could seem attractive if conditions worsen. Of course that’s if Britain actually follows through with the resolution.

Sturgeon has just started the countdown to IndyRef Two:

Clear change in constitutional circumstances;
Referendum is on the table;
Legislation to enable referendum being prepared for <2.5 year timeline.
If need be, to be held without Westminster agreement.

The fuse is lit…

I was being partly flippant, partly serious.

Scottish independence won’t happen anytime soon. It was your implication that the UK will split that I took issue with. 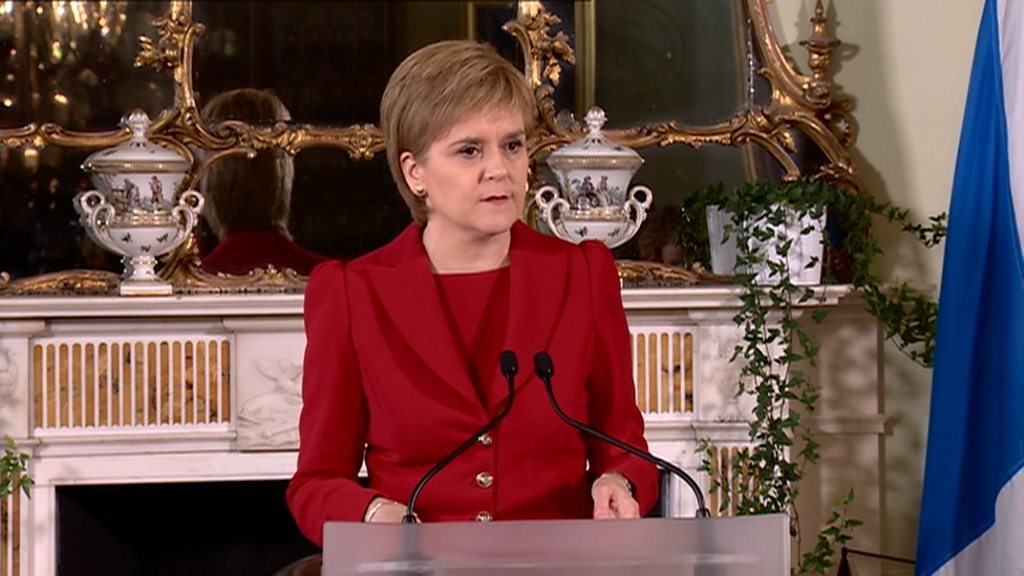 Scotland's first minister says a second independence referendum is "highly likely" after the UK voted to leave the EU.

Motion of no confidence just issued for Jeremy Corbyn

Without preferential rates…and since when is increased exports a good thing when profits decrease?

To quote a local firm, “When the customers buy in dollars, and my goods are made in China, a weak pound is great.” The mess with VATMOSS and place of supply has already forced a lot of small European firms including the UK’s to trade outside the EU.

As confused as ever, Fox News thinks the UK has left the UN.

We’re all going to lose 5-10% of our 401k value today, and they’ll creep back up over time. Markets hate uncertainty but soon things will level out.

Who’s next? A French Frexit? Scotland joining back in on its own? What’s the tipping point- How many members can the EU lose before disintegrating?

No. Its you who are kidding yourself if you think that a preference for “remain” is also necessarily a desire to end the United Kingdom if it does leave.

Firstly, the SNP no longer has a majority in the Scottish Parliament, it will need other parties agreement to get an agreement for a new referendum, which is very unlikely. So at the very least the referendum will have to wait until after the next Scottish election; due in 2020.

Secondly, Scotland has seen a major rise in Tory support, they went from 4th to 2nd in the last election.

Thirdly, the EU is in existential crises, Eurocrats statements notwithstanding. Who knows whether there even will be an EU (as we know it) in a few years. I really seriously doubt that people are going to jump out of the UK, to join a club which might bot even exist shortly.

SNP need two seats to launch a referendum. Scottish Greens (6 seats) have already said they would like a referendum in the event of Brexit.

And Sturgeon has just stated that she wants to start proceedings for a 2nd ref. In short, I think your prediction is way off.

How many members can the EU lose before disintegrating?

It’s really up to France and Germany, those are by far the two biggest economies and they’re the ones propping up the underperforming economies in the EU. It also seems to be that the newly joined eastern european states are the ones most keen on keeping the EU together, so Netherlands and Denmark splitting off wouldn’t be disastrous.

No. Its you who are kidding yourself if you think that a preference for “remain” is also necessarily a desire to end the United Kingdom if it does leave.

Firstly, the SNP no longer has a majority in the Scottish Parliament, it will need other parties agreement to get an agreement for a new referendum, which is very unlikely. So at the very least the referendum will have to wait until after the next Scottish election; due in 2020.

The SNP would only need to add the support of, what, two other members to get an independence majority? Out of 65, all of whose constituencies supported Remain?

Without getting into the weeds, it sure doesn’t seem like that should be a stretch.

The SNP would only need to add the support of, what, two other members to get an independence majority? Out of 65, all of whose constituencies supported Remain?

Yes, the breakup of the UK is a done deal. It’s fundamentally wrong for england to drag Scotland out of the EU when it wants to remain by such a clear margin. And seeing as London also voted to remain by a large majority maybe London can leave and remain in the EU as well.

Could end up as a Singapore / Malaysia kind of thing, just let London keep a strip of land along the chunnel route and Heathrow and all will be good.

I wonder if London fancies being an exclave of an independent Scotland?